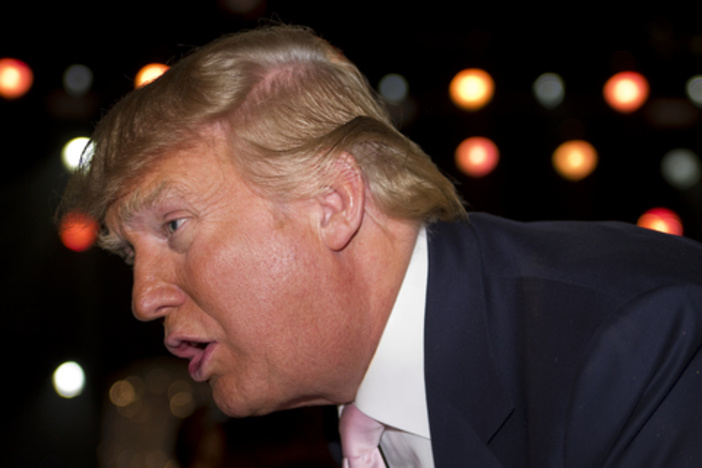 His hair is ridiculous. And he should have read Dale Carnegie’s book on How to Win Friends and Influence People before he got into that big word war with Rosie O’Donnell. And he has definitely encountered some serious financial challenges on more than one occasion with more than one of the projects he is involved in. But, there is absolutely no denying that Donald Trump is a deal maker and he’s also a brilliant marketer.

A few weeks ago I read the book Trump Strategies For Real Estate by George Ross. George is Donald Trump’s legal advisor made famous by the earlier Apprentice episodes. Through George’s stories I really appreciated the genius and tenacity it took to pull off some of the big deals that made Trump famous in his early years.

Today I thought I’d share just five of the strategies I took from the book. These are Trump sized strategies that will work for the every day investor.

1. Almost every problem has a price tag.

We always have our properties inspected. Sometimes we already know the issues that will arise so it seems redundant to have the property inspected. But we’re using the inspection as much as a tool to reduce the purchase price as we are for risk mitigation.

Little issues can add up to $5,000 pretty quickly and with an inspection report to back it up you can go back to the sellers and ask for a price reduction. This is after you’ve already negotiated the best price so – every little reduction in price you make can add up if you do this consistently.

In Trump’s case, legal issues often came up. Sometimes it was zoning issues or lease issues, but either way Trump coached George to look at the legal issues and find a way to create a better deal. When you look at a problem as a way to make the deal better a problem really does become an opportunity.

2. Learn to tell a great story. We rely on joint venture partners for the majority of our deals. Since we typically buy properties out right the only way we can keep on buying properties, reduce our liability and find financing is to find joint venture partners with the money and the financability to join us on our deals. And the absolute best way to get a joint venture partner excited about a deal is to tell a great story. One of our joint venture partners who has done five deals with us always loves to hear about the price negotiation. He revels in the details about how we got the seller down to the lowest price possible. He also loves to hear all the details about how we uncovered the deal and what makes it a great deal. He sits a little closer and leans in to hear the details almost as though we were sharing juicy gossip about his ex. I know he’s not alone. And Donald Trump is a master story teller … so learn from him and tell your partners how you found the deal, what your inspiration was and the challenges you’ve already overcome.

Just because it’s cheap doesn’t mean it’s a good buy. Be like Trump and look for properties where you can add real value.

Look for opportunities to:

If you find a well priced property in a location that is convenient, has a great view, or has potential for prestige and you see a way to add value then you’ve got a deal you can super size!

4. If It’s Easy, There’s Probably Not A LOT of Profit In It

Last week, in my post about Rent to Own Deals: What Comes First the Tenant or the Property, I talked about the dilemma we’re facing in our rent to own deals this year. Essentially, we’re finding that it’s easier to do deals with the tenant first. There’s less work in finding the deals, and there’s no work to find the tenants for the properties because they are already there! But we’re finding that we’re paying full market price for the property and there’s less profit in it for us and for our joint venture partners. Basically they are still good deals but they aren’t juicy deals. These deals don’t leave a lot of room for us to add value or make a bit more money. George says “Everything worth doing is difficult, and in order to accomplish it, you have to be tenacious”.

I tend to agree. And sometimes there isn’t even a lot of profit in it. One only needs to read the most hilarious real estate post ever by Steph Davis to learn how hard you have to work to earn $500 sometimes in real estate.

5. Negotiate Like Trump: Be Prepared, Take Your Time & Make it Exclusive

Maybe nobody wants Trump’s hair but most of us are interested in the deals he does because he puts together some of the most creative and big thinking deals imaginable. And most of that is because he’s mastered the art of negotiation. Here’s just a few of the tips to Trump your next negotiation:

Think big! Think bold! And super size your success like Donald Trump. If you’re not exuding enthusiasm about your real estate investing then you will struggle to find the deals, attract the money and find the tenants! Be committed and enthusiastic and don’t be afraid to think a little like Donald Trump. I promise you won’t have to have his hair to enjoy a little bit of his success.

Rick
Donald Trump is always interesting to follow. I think there is a lot one can learn from a man like him. He seems to bounce back from any sort of set back. You didn’t really mention that but I think that alone is probably one of his success secrets. Good article Julie. Love Dad.

Rick
Donald Trump is always interesting to follow. I think there is a lot one can learn from a man like him. He seems to bounce back from any sort of set back. You didn’t really mention that but I think that alone is probably one of his success secrets. Good article Julie. Love Dad.

Rick
Donald Trump is always interesting to follow. I think there is a lot one can learn from a man like him. He seems to bounce back from any sort of set back. You didn’t really mention that but I think that alone is probably one of his success secrets. Good article Julie. Love Dad. Reply Report comment

Rachel Aka Mobile Home Gurl
Very entertaining and informative article, Julie! Way to open and close the article with humor. These are great strategies here. I can think of a real estate related story for every one of them especially #3 – I learned the hard way on that one. Out of all of them, I like #5. I think a lot of folks tend to rush into things when first starting out – they want to buy that first and/or couple of deals. Through experience, I’ve learned to take my time when pursuing opportunities – I have to look at things from all angles before I decide to jump in. Most of the time, I’m really evaluating the person whether it be a seller or buyer. In most cases, if I can get a feeling that the person I’m dealing with is trustworthy than I decide whether to pursue the opportunity or not. If the person does not seem trustworthy, I don’t pursue it – even if it means passing on a deal. Believe me, I’ve been burned before on this one – that’s why I can also relate to #3 as well as #4. I enjoyed reading the article, thanks for sharing!

Julie Broad
Thanks so much Dad! Love it when you read my posts! Rachel – you always add so much value with your comments. Thank you for taking the time to respond. The gut feeling is such an important thing. You can’t teach it … you just have to trust in what you’ve got. And the better you get (or more experienced anyway) the stronger the guy feelings get. Thanks again!!