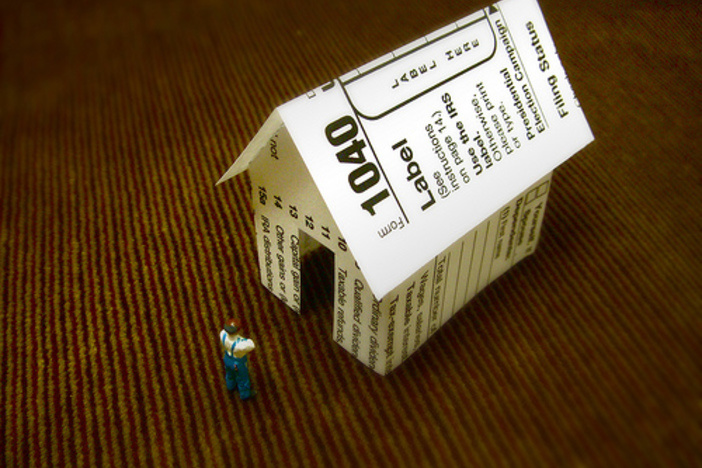 If you’d like to take a sale on a property, but the tax hit will be painful, do some tax planning via the sale’s structure. This is the time of year when all kinds of slight modifications in a sale’s terms can result in solid tax savings. This year though, it might be problematic due to the scheduled end of the Bush tax cuts. Even if those cuts disappear, it’s still possible, depending upon your specific circumstances, to reduce total taxes owed. What’s not in doubt is your ability to delay the payment of those taxes.

Rod had enjoyed a huge 2003, but wanted to back off his work schedule for the next few years. His dad had passed away a couple years back, and now his mom was beginning to show signs of hittin’ a much lower gear. She was still relatively healthy, but at 83 was in need of a closer, and more frequent family presence. Since she was in another state, Rod and his two sisters decided to move her to Colorado, where Rod had lived the last 20 years. He wanted to build a nice one bedroom apartment behind his home, attached by a breezeway.

The problem was not which property to sell, but how best to minimize his taxes. He wasn’t interested in borrowing against it, as it had become his least favorite. Here’s what we did.

Since it was the Labor Day weekend when he first contacted me about this, I immediately knew that the split down payment approach would work to his advantage. We sold it in November (there is a God and he loves me), closing it just after Christmas. It was a fourplex. It sold for just over $500,000 with a net equity of roughly half of that.

The buyer was adamant about putting down 30%, a position on which he simply wouldn’t budge. Not a problem. We split the down payment, chronologically, into three parts. 10% at closing — 10% on or before January 10th, 2004 — 10% on or before January 10th, 2005.  The buyer would pay the largest penalty allowed by law for prepayment. This was handled through the terms of a note/trust deed carried back by Rod. (And yeah, good luck finding a lender these days who wouldn’t laugh you out of his office for even proposing this out loud.)

This gave a large portion of the transaction, installment sale status. Rod didn’t pay anything on the $100,000 note in the year of sale. He then paid taxes in 2004 on what the IRC formula showed as return on capital, plus 2-10 days of interest. In 2005 he repeated that sequence. Recall that Rod had already decided to throttle back on his work efforts, so his ordinary income for ’04 and ’05 were significantly less than his banner year, ’03.

The buyer liked the fact that the note he executed in favor of the seller called for no payments, and just 7% interest. Also, since he had no payments on the junior note, the property’s month to month performance was unaffected. It didn’t hurt that not only was the buyer a pretty good guy, but that his broker was a highly experienced pro, who contributed immensely to the success of the transaction.

Rod loved the results. Still, we had to deal with all the cash, and therefore capital gain the new purchase loan was gonna generate in 2003. Though he didn’t like it at all, he went along with my advice to execute a partial tax deferred exchange. He only needed about $50,000 to build Mom’s apartment. He would have that and a bit more, after taxes, once the first January payment was made, only a week or two after closing.

We exchanged the remaining equity so that the new loan on his upleg (newly acquired property) was about equal, or at least not much more than what he'd left behind. This was made easier by the fact that his local market sported a much better price/rent ratio, generally speaking, than had his fourplex in San Diego. Sweet. He still wasn't happy about doing the exchange, but admitted it was much preferred over the alternative of an onerous tax bill. Duh. ð

With the help of his sisters, he moved Mom into his home the week we took the listing. She moved into her new place, if memory serves, some time before Memorial Day. She turned 90 recently and is still in relatively good health. Rod’s contemplating the addition of a bedroom to her apartment for a live-in nurse when the time comes.

It’s all a matter of having a Plan and doin’ things on Purpose.

Debbie Marie
Fantastic article. Thanks for opening my eyes to new ways of doing business and helping people!