Is the Real Estate Market Poised to Collapse Again? 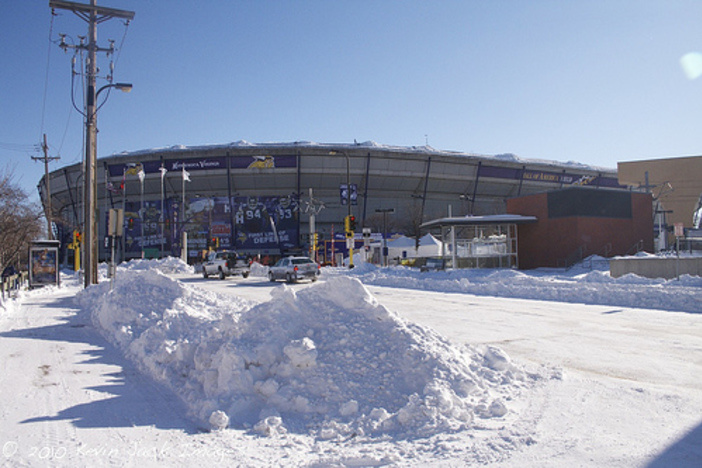 I love football.  College or pro – it doesn’t matter.  If there is a game on I’ll watch.  But these days it’s pretty difficult to dedicate four hours or more to sitting on the couch in front of the TV.  I have to be creative.  My wife will allow it if I agree to fold laundry at the same time.  Last Sunday, I set up a card table in our bedroom and prepared our taxes while keeping an eye on the Eagles vs. Cowboys game.  Doing taxes is never fun but watching the Cowboys lose made it less painful.

If you were watching any NFL football on Sunday then you probably saw the amazing video of the Metrodome roof collapse in Minneapolis.  What is scary is that a game was scheduled to be played there the next day.  Equally frightening is that it took just 17 inches of snow for the whole dome to come crashing down.  It turns out that the roof has collapsed four times in the last 29 years.  I came to two conclusions after I saw this video:

You would think in a region of the country that averages 50 inches of snowfall a year someone would have thought to build a structure that would hold up better when the temperatures drop.  But consider this for a moment – maybe, just maybe, the architects and engineers that built the Metrodome did their homework.  They had a solid plan in place.  But external forces beyond their control (i.e. Mother Nature) took over and the whole thing collapsed.

We all know it’s not easy to predict the weather.  In college, one of my science professors told the class that even with all the sophisticated equipment and computers meteorologists still only get the forecast right about 58% of the time.  He colorfully pointed out that’s only 8% better than flipping a coin. Sometimes I feel like real estate investing is a lot like forecasting the weather.  Before I buy a house maybe I need get out the Magic 8 Ball.  Should I buy this house or not?  The ball says “outlook not so good.”  Case in point – over the past 18 months my investment firm has flipped 40 houses.  Several of them were located in Buckeye, Arizona, which is about 30 miles west of downtown Phoenix.  We bought and sold one particular model of home in a popular subdivision out there six times – the retail sales price ranging from 105-110K.

After the tax credit expired on April 30th we bought two more of these homes at the auction.  I calculated that they would be worth about $8,000 less because the government wasn’t paying people to buy houses anymore.  That seems logical right?  Boy was I wrong.  We just closed on one – the retail sales price?  $77,000!  The other property is now pending for $83,900.  That’s a drop of more than 25% in just six months.

How could this happen?  After all, we had a good track record and a solid business plan in place.

It’s because there were external forces at work – the expiration of the tax credit, tighter lending restrictions, unemployment and lousy public perception.  A combination of these factors has many housing experts predicting that we are poised for yet another real estate market collapse.  Based on my recent experience it would be difficult to argue otherwise.

But I’m a glass half full, not half empty kind of guy.  Yes, we lost money on these two deals.  That’s the bad news.  The good news is once we lowered the prices we got multiple offers on both of them.  That tells me there are signs of life out there – if the price is right.  We just need to find better deals from now on. You’ve probably heard the old Yiddish proverb, “Man plans, God laughs.”  These days it seems like there are always external forces at work.  For a real estate investor there’s the federal government, banks and a fickle buyer’s market.  For the folks who built the Metrodome in Minneapolis there’s Mother Nature.

Sometimes even the most careful planning won’t help you avert disaster.  The roof may collapse on you a few times.  Fortunately, in real estate you don’t have to be right 100% of the time to be successful.

Steve
I’ve been talking to people about that lately. The $8,000 tax credit has really meant about a $30,000 drop in retail prices for my stuff. So people would be smarter to buy a house now (with no tax credit). For us investors are still paying what they used too pre-tax credit days… which cannot last too long.

Marty Boardman
Steve, you are right. The $8,000 tax credit juiced the market – in some areas and price points more than others. It makes me wonder where values would be today without it.

John Starks
I do not believe we are posed for another collapse. Perhaps the market has yet to bottom out, but collapse, probably not. Many markets are seeing increased traffic, not necessarily people or businesses buying, but at least looking. Many folks are fearful of the market (both housing and Wall Street) and are sitting on the side waiting to jump back in. With that type of kinetic energy on the sidelines, there is a less probability for collapse. Additionally, a collapse requires some sort of inertia. Right now the markets are sluggish and overly cautious if anything. I believe things will sink a little more before we see some rebound. But we are definitely closer to the bottom and than we are near the top. The worst is over.

Marty Boardman
John, my Dad likes to say that a recession is what happens when your neighbor loses his job. A depression is what happens when you lose yours. In Phoenix, home values have dropped 7% over the last 12 months. If you bought a house here 3 years ago that may not feel like a collapse. But if you just bought a year ago it probably does. The good news is demand remains strong here – it’s just that buyers today are more selective and they want a deal. Since last December we’ve sold over 90,000 houses. A promising sign for sure.

MH
External forces will always be and have always been extremely present in any kind of supply/demand situation – only difference is that these days the external forces are a lot more hostile than they used to be.

MH
External forces will always be and have always been extremely present in any kind of supply/demand situation – only difference is that these days the external forces are a lot more hostile than they used to be.

Marty Boardman
MH, I agree. But not that long ago a real estate investor didn’t have to worry too much about what was going on in Washington or Wall Street. There were no $8,000 tax credits. Real estate used to be a hedge against the stock market. It was one loan – one lender. When traders figured out how to bundle up mortgages and sell them as securities two forces that once moved in different directions became one. That’s dangerous and very unhealthy.

Edwin Sanchez
Great post Marty. Like you said, there is life out there. And if the real estate is priced right, it will sell. We are an active investment firm as well, but for multifamily apartments and specifically buying in the Phoenix market right now. There is too many opportunities to sit on the sidelines but if investors are careful and utilize “what if” scenarios (actual figures with cushions for market vacancy, etc), then you can be better protected when another, if another, downturn hits.

Dean
Hi Marty, I am a 54 guy with a wife that lives in Wisconsin and have looked at possibly wanting to buy a place to retire in the future in say 10 – 15 years. My older parents currently live in Chandler and that is a nice area, but I feel that area is still to high priced for what I want or need. I have searched areas like Rancho El Dorado, Maricopa, and Pecan Creek and Johnson Ranch in Queen Creek and think those house prices are good for what I can afford. My biggest concern is two fold. First, is the concern that the areas are in a good location and won’t be vandalized. Two, that if I want to rent it out, do I go thru a management company, or try to do it myself? Is it even worth buying now, or wait till I’m ready to retire. Those areas could recover and then I would end up paying 3 to 4 times what they are going for now. Also, how hard is it to purchase a short sale home? Thanks.