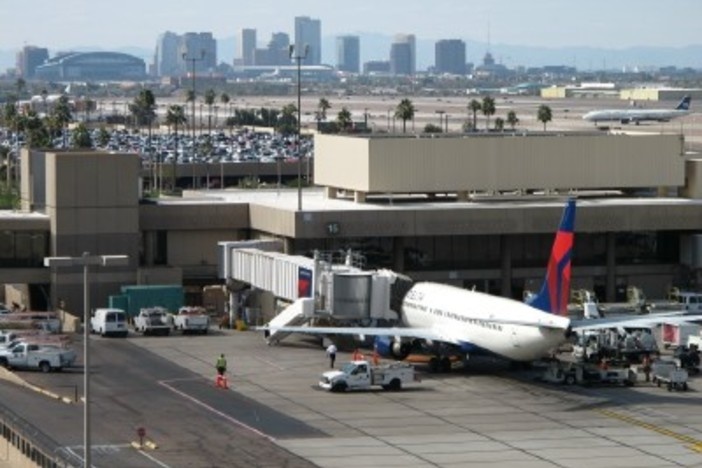 I love the airport.  Last week I went there to pick up my Mom and Dad.  They were returning from a 10-day Caribbean cruise.  I brought my daughter with me because she missed her Grandma and Papa – and the steady stream of tootsie rolls and peppermints she gets whenever my Dad is around.  He hands out candy and money to my kids without giving it a second thought.  I don’t recall him being that generous when I was growing up.

While we were waiting for my parents to get off the plane I noticed a young man standing alone near the security checkpoint.  He kept peering down the terminal hallway.  You know that look right?  The open-hand-on-your-forehead- standing-on-your tiptoes-with-neck-straining-forward look.

But this guy was different.  I could see a twinkle in his eye.  It turns out he was waiting for his girlfriend.  When she finally made it over to him they promptly kissed and kissed.  And kissed again.  A hug then followed.

This little scene took me back to the early days with my wife, Linda – pre marriage and pre kids.  For a short time I lived in Denver and she lived here in Phoenix.  About once a month Linda would fly out to see me and we’d have a similar reunion at the terminal gate.  Isn’t that romantic?  It makes me feel all warm and fuzzy inside. I love traveling on airplanes too.  There’s something about boarding a plane in a city like Phoenix, and within a few hours, being in a completely different place like Chicago that I find very cool.  Plus the view from 30,000 feet is breathtaking.  I enjoy seeing the changes in topography and weather patterns during flight.

On Tuesday, the Case-Shiller Home Price Index was released by Standard and Poors.  What is that?  Well, here’s an explanation in their words:

What the gang at S&P should really say is that the Case-Shiller Home Price Index is nothing more than a 30,000 foot view of the real estate market.  It tracks sales pairings in 20 major U.S. cities and Phoenix is one of them.  Problem is that the data is already three months old by the time it’s released to the public.  And while you can get a general sense of scenery and movements in the marketplace from this height, it’s impossible to see subtle nuances like you would from the ground. In their press release from earlier this week here’s what Case-Shiller had to say about Phoenix:

“California is doing better with gains from their low points in Los Angeles, San Diego and San Francisco.  At the other end is the Sun Belt – Las Vegas, Miami, Phoenix and Tampa. All four made new lows in December.”

Isn’t that gloomy.  If I wasn’t actively investing in real estate here I’d say that sounds downright scary.  But what if I told you that just this past weekend we got 9 offers on two houses – and that 4 of the 9 offers were for more than our list price?  That certainly doesn’t sound like a market on the way down.

So should we real estate investors care about the Case-Shiller Home Price Index?  The answer is yes.  I suggest you enjoy it as if you were looking out the window of an airplane.  Just remember the more descriptive view is from ground level.  Here we can see the sharp lines and jagged edges – where we feel the momentum in the marketplace and go against the grain.

Another Investor
Inventory is down in nearly every segment of the Phoenix market I follow. The spring selling season is well underway and it seems very strong. Almost all the decent product is under contract. Not a lot of new foreclosure product is being listed, and a lot of what is listed is grossly overpriced. Case Schiller is of some help to news reporters and other folks not directly involved in the market. Buyers, sellers and agents on the ground know the view from 30,000 feet yesterday is irrelevant to them.

Marty Boardman
The index number for Phoenix in May of 2006 was 228. In December 2010 it was 102. The last time the index was this low was April 2000. I find this information useful if I’m talking to investors that are unsure about whether or not to buy in this market. It helps illustrate how far we have fallen. And, it makes me sound really smart.

Marty Boardman
The index number for Phoenix in May of 2006 was 228. In December 2010 it was 102. The last time the index was this low was April 2000. I find this information useful if I’m talking to investors that are unsure about whether or not to buy in this market. It helps illustrate how far we have fallen. And, it makes me sound really smart.

Marty Boardman
The index number for Phoenix in May of 2006 was 228. In December 2010 it was 102. The last time the index was this low was April 2000. I find this information useful if I’m talking to investors that are unsure about whether or not to buy in this market. It helps illustrate how far we have fallen. And, it makes me sound really smart. Reply Report comment

Kevin Kaczmarek
I have found that the Case-Shiller is good in that it sparks debate. Lagging data is difficult to move forward with, but in media and professional commentary the open dialogue it creates towards future directions of the housing market it valuable.

Marty Boardman
I agree with you Kevin. The media commentary is typically negative, which can be a good thing for real estate investors with perspective. While the uniformed wait for things to turn around the educated investors are out there gobbling up cheap real estate. That’s why we’re hearing so much about all the cash buyers in the market right now. NAR is reporting that in 2010 28% of homes nationwide were paid for in cash.

Yakezie
We should care, but all real estate is local. Sam

Marty Boardman
So true Sam. I once heard Joe Williams, co-founder of Keller Williams say that “There is no such thing as a national housing market. Real Estate is a local business.”

Jeff Brown
Boots on the ground beats pretty much every other M.O. Good stuff, Marty.

Randy Michael
Not only is the Case-Schiller too general to be useful, but I believe ANY method which values houses based on a sales approach to value is an outdated and misleading methodology, at least for investors. First, you make your money when you buy real estate, not when you sell it. If you buy it right, you won’t want to sell because the cash flow and other benefits outweigh the short-term capital gains. But even if you do plan on selling the house, the assumptions behind the sales approach to value is that history will repeat itself (“comps”) , and that you actually CAN sell the house at any price in a market where bank financing doesn’t exist, especially on a flip where title seasoning is always an issue. Both assumptions are flawed in today’s market, even though it should be no surprise that the mortgage industry won’t adapt. I’ve always found that the income approach to value is a much more reasonable way for an investor to value a house. The house’s value is in direct proportion to the income it would generate as a rental. This litmus test assures the flipper that he has a viable backup plan, including the fact that even if he doesn’t want to be a landlord, he’ll be able to find an investor who does as long as it cash flows. Equity is easy, cash is king.

Matt Mathews
As Jeff B. says; Boots on the ground! On the Street in the trenches so to speak are the one’s who really know what’s happening. With that said however, keeping an eye on the big picture is a must do for the long term. More big surprises might be headed our way very soon!! Just remember; The Feds, and politicians, when making new laws, only look at the big picture. Bubbles, bailouts and band aids have been their mantra so far- What’s Next??