What I Saw at the Boston Marathon 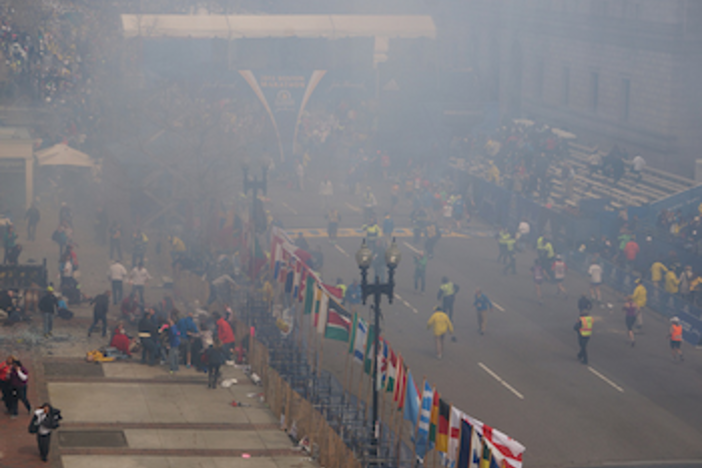 I will take a short break from posting about investing for some personal observations from last Monday. My family attended the marathon to support our niece in her run. We were stationed at the end of Heartbreak Hill a few miles from the finish line. The rest of my family [4 siblings of my wife and 6 nieces and nephews] were at the finish line. We cheered our niece on as she went by, got a real nice photo, and went to the T [subway]to head to see her finish. While on the T [it was running slow because of the amount of people]we got a text that she had finished, so we decided to head straight to the restaurant where the family would convene to celebrate.

A couple of minutes later the subway was stopped and we were directed up onto street level about 1/4 mile from the finish. We had no idea what had happened at that time. Cell service was spotty. There were tens of thousands of people walking down the street, and few of them were aware of what had happened. We were told that there was an incident at the finish line, but it wasn’t until we walked by a bar that we understood what was really going on. Somewhere along there we got a text that told us everyone in our family was OK and they were heading to a nephew’s condo.

There were constant ambulances, police, FBI, etc. streaming by at that time. We witnessed many, many acts of kindness and no panic. Still there were many who had no idea what had happened. You can imagine how hard it is to evacuate hundred’s of thousands of people with the public transportation shut down, hotels closed off, etc. But it all worked some how. We walked quite a ways until we found someone with cell service that could use their GPS to give us directions to our nephews condo. My son was petrified of course, but he has recovered nicely. We were the last of the family to get to the condo.

What my Family Saw

Our niece was yards from the finish line when the first bomb went off. The rest of my family cheered her as she went by and then saw her disappear as the smoke from the first blast obliterated their view. Talk about a scary moment! They were on the opposite side of the street from the bombs with the exception of my brother-in-law and his son who were next to the spot where the second bomb exploded. He and his son escaped through a restaurant that had its front glass blown out. One of my nephews found our runner and brought her to his apartment. Can you imagine running a marathon and then having to keep running with the blasts fresh in your memory? The police had already understood that the blasts were coming from trash barrels as they instructed folks to leave but avoid trash barrels right after the blast. They told stories of chaos at the scene.

What the Cameras Caught

Volunteers, racers, police, military all running directly to the scene and helping the victims. Beyond the carnage was an incredible group of people who immediately reacted to help. The finish line is situated just a few miles from some of the best hospitals in the world and this proved to be fortunate for many. It could have been much worse if these people hadn’t reacted the way they did and it took place at a different place.

We are thankful no one in our family got hurt. We pray for the victims and their families. One note, we were standing at the exact spot of the first bomb last year for the marathon. Life is precious, don’t take it for granted.

Thanks for letting me write this as it does help to put my thoughts down.

Sharon Vornholt
Wow David – Someone was looking after your family that day. I’m glad everyone is OK. Sharon

Dana
Wonderful that you and your family were not injured in this heinous attack. My prayers continue to go up for Boston as well as Dallas victims. Reply Report comment

Dana
Wonderful that you and your family were not injured in this heinous attack. My prayers continue to go up for Boston as well as Dallas victims.

Eric Lundberg
Thanks for sharing. It’s events like this that make us realize how precious our time with our loved ones is. Glad you are all ok.

Loretta
I can not imagine the chaos and uncertainty your family must have gone through. Thank the Lord, you and your family are safe as we all continue to pray for the citizens of Boston. Reply Report comment

Loretta
I can not imagine the chaos and uncertainty your family must have gone through. Thank the Lord, you and your family are safe as we all continue to pray for the citizens of Boston.

Loretta
I can not imagine the chaos and uncertainty your family must have gone through. Thank the Lord, you and your family are safe as we all continue to pray for the citizens of Boston.

Karen Rittenhouse
David: So glad your family is safe. What an unspeakable unnecessary tragedy. Thanks for sharing your story.

Michele Galloway
David, I am among those who are grateful to God that your testimony was favorable for your family. Thank you for sharing. These good stories help to ease the pain of the terrible ones. This lesson of appreciation for family is not lost on us.

Wilton
David, Thanks for sharing and so thankful your family are safe. At first I did not want to read this but reading this is therapeutic. I love Boston and proud to live here. Again thanks and God Bless.