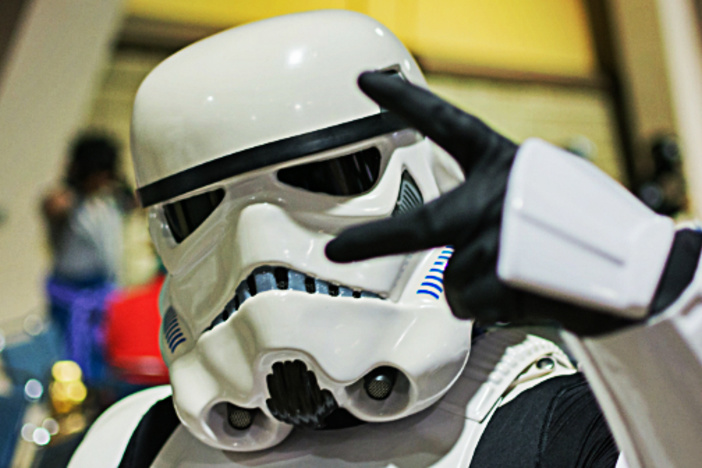 The acquisition of the Star Wars franchise by Disney may have very well been one of the best deals in the history of business. Disney CEO Bob Iger has had a lot of successful acquisitions while being the head of Disney including Pixar and Marvel. But Star Wars was probably the best.

It’s not just that The Force Awakens has set a domestic record with a $936 million gross (and $2.07 billion worldwide as of this writing). But Disney plans to make Star Wars the new Marvel with a massive cinematic universe that revolves around the core films. And then there’s Star War’s enduring ability to sell video games, toys, clothes, and well, just about everything else.

Disney bought Star Wars and LucasFilm from George Lucas for $4 billion dollars. Yet, according to Forbes, it should be worth $10 billion to Disney, which would mean they bought it for only 40 percent of its value. Indeed, Fortune Magazine estimates the total revenue thus far received from Star Wars in all its various guises at $42 billion — which, as it notes, exceeds “…the GDP of countries like Jordan and Paraguay.” With Rogue One and Star Wars Episode VIII about to come out along with a bunch more toys, books and the like, expect that number to only grow.

And not surprisingly, with such fantastic acquisitions, Disney’s stock price has gone from $27.97 in March of 2005 when Bob Iger became CEO, to $103.30 today.

Much of business is being in the right place at the right time. And of course, as they say, it’s more about who you know than what you know.

I would add to this one more component — and that is being able to tailor your offer to meet the conditions of what the seller wants instead of what you want. Bob Iger did this perfectly when acquiring Star Wars.

George Lucas noted that “I’ve never been that much of a money guy. I’m more of a film guy, and most of the money I’ve made is in defense of trying to keep creative control of my movies.” If he was going to sell Star Wars to anyone, it would be someone who respected the legacy of it and looked to continue it instead of radically changing it. In addition, such a buyer would need to allow Lucasfilm to continue to operate without too much interference and would at least allow George Lucas himself some influence.

As Bloomberg points out:

“Lucas had paid close attention to how Disney had handled Pixar… He calls Disney’s decision not to meddle with Pixar ‘brilliant.’ If he sold Lucasfilm to Disney, he figured there might still be a way to retain some influence over his fictitious universe.”

So in essence, the first thing working in Disney’s favor was that Disney had done right by others in the past and had a strong track record to point to.

The next thing was that Disney was there at the right time and made sure to keep in Lucas’s ear about their desire to purchase the franchise. This was easier for them to do because Disney World was working with George Lucas on Star Tours, an amusement park ride. As the Bloomberg piece goes on to explain:

“On the morning of the Star Tours opening, Iger met Lucas for breakfast at the Hollywood Brown Derby, one of Disney World’s restaurants. It was closed for the occasion so the two men could speak freely. Fresh from his daily workout, Iger ordered a yogurt parfait. Lucas treated himself to one of the Brown Derby’s larger omelets. The two exchanged pleasantries. Then Iger inquired whether Lucas would ever consider selling his company.

“Lucas replied that he’d recently celebrated his 67th birthday and was starting to think seriously about retiring. So perhaps the sale of his company was inevitable. ‘I’m not ready to pursue that now,’ he told Iger. ‘But when I am, I’d love to talk.'”

“Iger did his best to conceal his excitement and told him to ‘call me when you’re ready.'”

While there was plenty to work out, and Disney did have to hold their ground to make it clear to Lucas that while they would listen to him, Disney would have to retain creative control (as Lucas’s displeasure with the latest The Force Awakens shows, that’s what happened). But regardless, Disney had effectively cut off all the other competition by being the only one George Lucas was negotiating with. They had created a monopoly on buying Star Wars.

And in the end, they got an incredible deal out of it.

What Real Estate Investors Can Learn From Disney

Several months later, my friend, almost at random, looked in the paper and saw the apartment listed at $1.5 million. He jumped on it, and given that he had already evaluated it (unlike his competition), he was able to make the offer immediately and beat everyone else to the punch. Many others tried to make offers afterwards — and for more money — but by that time my friend already had the property under contract. Not long after buying it and increasing the rents, it ended up appraising for close to $3 million.

We’ve personally had several deals where we have built rapport with the seller, only for the deal to fall apart. Then, many months will pass and the deal will come back to us at the price we want. We once lost out on a fourplex that we had agreed to buy for $85,000. Over a year later (after prices had gone up considerably), the seller came back to us, and we were able to buy the property for only $78,000.

You Reap What You Sow

The same is true of networking or being active on BiggerPockets. While I had learned a lot from reading articles and the Forums on BiggerPockets, I hadn’t had any substantive benefit at first. That changed very quickly when one person I met on BiggerPockets put me in touch with two different banks that have made loans to us on 42 different properties!

Another person I met through BiggerPockets put us in touch with someone selling a portfolio of 41 houses we were able to purchase at what I think was a very good price.

And the same could be said for networking at CCIM, where I have been directed to several banks and our local real estate club, from which I have found deals through wholesalers and contractors.

But it takes time and patience. Building rapport with a seller, as Iger did with Lucas, and networking rarely have immediate benefits. It is a long term play, but a critical one. These types of things may feel like spinning your wheels, but the effects of networking and building rapport and putting yourself out there start to compound on themselves and eventually feel exponential in their contribution.

Finally, as was noted about Disney making its appeal to what Lucas wanted (some creative influence, continuity at LucasFilm, and a promise that the spirit of Star Wars would be unaltered) allowed them to get a great deal on price. Building rapport is the best way to find those areas to get a great deal by offering what is important to the seller, but may not be a concession to you.

When we purchased the package of 97 homes, one of the big advantages we had was that we planned to keep them for the long term and not just sell them off for a profit. This created sort of a continuity as the seller’s life work would be looked after well. Thus, despite our offer being no better than the others, he went with us over them.

In the end, you reap what you sow. And oftentimes you will reap it long after you sow it. Patience is a virtue, as is persistence. It would be wise to start sowing as much as possible right now.

What do you think about Disney’s deal with George Lucas? What lessons do you take from it?

Douglas Skipworth Rental Property Investor from Memphis, TN
Great article, Andrew. I have enjoyed this series so much. Please keep the comparisons coming. They give us a lot to think about as we seek to grow and improve our real estate business.

Jerry W. Investor from Thermopolis, Wyoming
Very nice article Andrew. I recently bought a 4 plex after making an offer and helping the Sellers out a few times they called me about 4 months later and said they had found out everything I told them was correct and not only sold me the property, they financed the down payment.

David Krulac from Mechanicsburg, Pennsylvania
I wrote in my book about my friend who bought his first investment property dealing with the owner directly and building a rapport. There were several other potential buyers dealing with the seller, but my friend ended up buying the property for a lower price than other competitors because of two reasons, the first being the rapport that he build with the seller and to confirm his serious intentions he offered a higher down payment .