Something major happened this week in the world of finance. The Federal Reserve has essentially given up on raising the fed funds rate any further in 2019.

This is a very “dovish” move by the Fed, signaling easy monetary policy in the future. While markets may view this as a positive in the short term, investors should be wary.

After a decade of the easiest monetary policy in the history of mankind, the Fed has found it difficult to raise interest rates as planned. It has tried to signal more aggressive rate increases, only to walk back the increases when the time comes.

As early as last fall, the plan was to raise rates four times in 2019. Now they are signaling no increases. The bond market looks like it is pricing in a cut!

Then, on Friday, March 22, the yield curve inverted. This means that the yield on the three-month treasury was higher than the 10-year treasury. This is a sign that investors are becoming very risk-averse. They believe the prospect for generating strong returns on longer term investments is weak.

It would be extremely rare for the yield curve to invert without a recession following within a couple years. Why is this important?

At this stage of the game, however, the economy is showing early signs of weakness. The housing market is slowing down. The Fed signaling a reversal in policy can be interpreted to mean that they think the economy and financial markets are too weak to support any more rate increases.

I’m afraid this is like when my gorgeous wife called me into the bedroom… to tell me that she spent this week’s golfing money on new shoes for the kids.

Markets may get excited, only to be let down by reality.

Keep in mind that the Fed’s “rate hikes” thus far have not even gotten back to what would historically be considered low rates.

Related: 6 Rules for Investing in Real Estate in the Coming Economic Shift with J Scott

In addition, the current rate is still below what would previously be considered recessionary rates. In prior expansions, that fed funds rate would reach double the current levels!

But the Fed throwing in the towel at this point says that the recovery might be over, and we should start thinking about how to protect our investments in the event of a downturn.

Before I get crushed in the comments, I am not calling for a vicious crash of epic proportions—although it’s always a possibility.

I am not advocating for buying land in Montana and stocking up on non-perishable goods. What I am saying is that this type of behavior at this stage in the cycle mimics other points in history where the economy started to turn.

Recessions typically play out over a multiyear tipping period before things get bad. Often, we’ve already been in a recession for a few months before economists even realize it.

I do think that buying the wrong deal with too much leverage can be papered over with low interest rates and a rising tide that lifts all boats. Try that now, and it’s going to hurt worse than stepping on a LEGO at 2 a.m. on the way to the kitchen.

Let’s take a look at what’s going on with housing, and think about what might happen moving forward.

State of the Housing Market

New home pricing was flat for most of 2018 before builders aggressively cut prices late in the year. Home builders don’t have the luxury of sitting on a home if they don’t get the price they like. They have to sell to generate cash flow and keep operating their business.

Once buyers stop settling for additional goodies and upgrades that don’t show up as price cuts, builders have to slash. That is what looks to be happening now.

Existing homes are also sitting on the market longer, while sales volume is declining pretty rapidly. 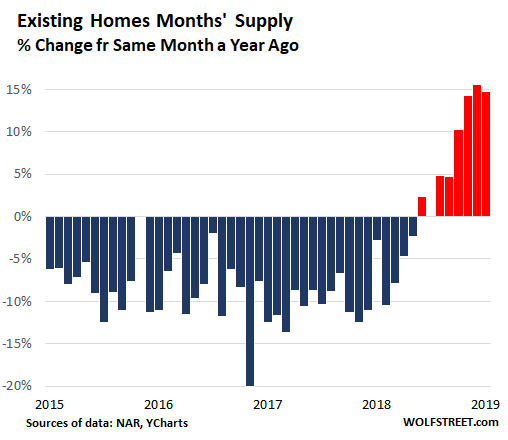 Related: This Could Devastate Your Real Estate Investing Business

Let me pull out my crystal ball for a moment.

I think a short-term rally will occur as the market’s Pavlovian response to easy policy takes hold. Cap rates may compress further as capital chases the lower financing costs.

Longer term, I believe markets will adjust. Interest rates will head back to zero as investors flee to safety. Cap rates will trend upward while stocks decline on the order of 50 percent—give or take.

Single family home prices will start to come down, albeit in a more orderly and tame fashion. It won’t be like last time, because lending practices are less ridiculous this time around.

Good deals will start to present themselves as the highly leveraged, marginal real estate players get exposed. I’ll buy great deals at high cap rates—probably from syndicators that were accountants or janitors six months ago and can’t refinance their debt.

Then, I’m going to get a boat. And the Bears are going to win the Super Bowl!

Also, Matt Nagy will ask me to be best friends, and we’ll do karate in the garage. They’ll eventually build a statue of me and “Nags” outside Soldier Field.

OK, too far. But seriously, no one has a crystal ball.

We only have two choices:

I think I know which option I’ll choose. See you in the woods!

What are your short-term predictions? Long-term?

I’d love to read them in the comments below.

Phil is the founder of The Macro Meets Real Estate Newsletter, a refreshing and entertaining take on real estate inves...Read More