Hello! This is my first post on BP, but I have been following for a little while, and been doing a LOT of reading. This year I decided I was ready to make some serious moves in REI and have begun pursuing properties and making offers in earnest. Finally have a property under contract but have some concerns as I have moved through due diligence. Here are the details:

Mixed-use building in an area of town that is seeing a resurgence, but this building isn't at the heart of it. It is about 1.5 miles from a brand new park that is very popular in town.

1818 sqft of retail on the first floor that is currently rented by 1 commercial tenant on a 3 yr (due July 2022), though the space can easily be converted into 2 spaces (would just require drywalling a door closed). Current lease for the retail space is $1200/mo 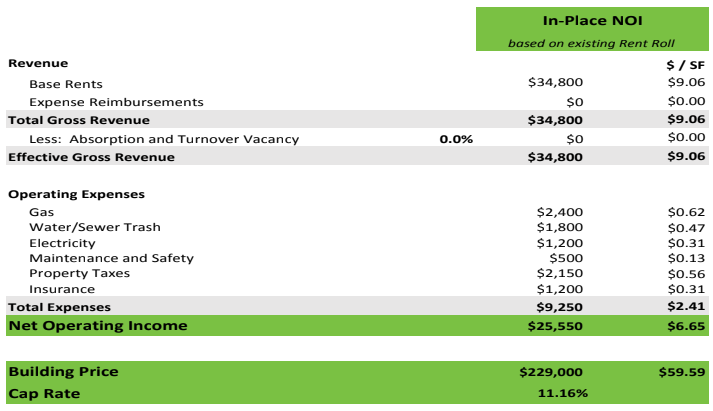 I did a walk through and the space wasn't too bad but I only got to see two of the four apartments. When I looked at Rentometer the rents in the area for a 1 bedroom were closer to $550. The tenants also only paid electric so I thought I could push the value of this thing, and since it was in a developing area of town I could ride the commercial lease for 2.5 more years and then work to find another lessee and get closer to $9.50/sqft.

So I presented the following Pro Forma based on missing costs and offered $180k: 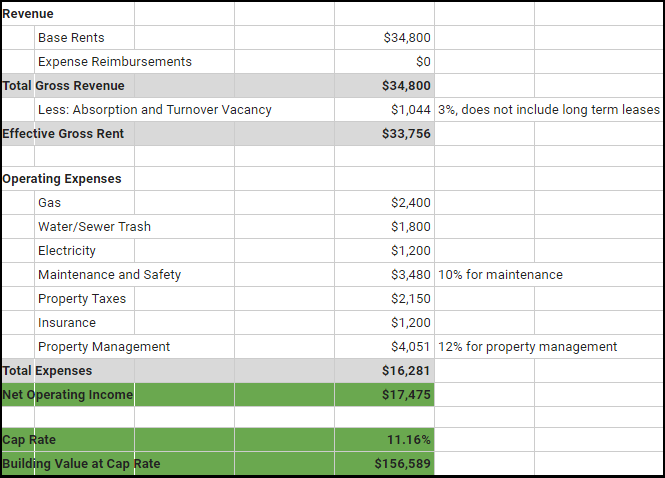 I got the deal under contract at $187.5k and have begun due diligence. Immediately some things don't start working out. First I can't insure this property for less than $2300 (unless I want to be under-insured). Secondly the leases were actually a 4-year lease, a 1-year lease, and 2 month-to-month leases. Thirdly, when I did a second walkthrough for the apartments 1 of the 2 was EXTREMELY small and could not get the $550 I thought. I think the $400 rent is about right. I also noticed on the second walk through that 3 of the apartments had active smokers in them (one of those being marijuana).

The biggest kicker to me is that the retail tenant is already 1.5 months in arrears within 5 months and has only paid on time 1 month into the deal. That worries me as I am less familiar with commercial real estate but would take it for a ride to get the multi-family portion. When I adjust my numbers to take into consideration the month to month nature of the two leases, and the credit loss from the retail client, I will have negative cash flow in year one, and it will push positive if I am able to command more rents ( I think I should be able to).

My numbers are below:

I need to decide quickly whether to move forward or to bow out due to the poor financials of the real estate client and the misrepresentation of the leases or to reoffer at $160k which makes the numbers work for me.

Thanks in advance. And thanks for having me on the forum!

Bump for the newbie

You almost lost me at a tenant owing back rent but then lost me at negative cash flow.

It's a difficult market to buy in most places, so don't get discouraged. Don't let FOMO push you into a deal you'll regret 3 months later.

@Matt Castle thanks for taking the time to look through this. I appreciate the encouragement.

I agree, it’s hard to walk in the balance of wanting the first deal badly but not driving too hard to make things work.

I decided this morning to void the contract based on the review of financials and reopen negotiations at a lower price.

I think the seller needs a little more time to get motivated.

@Gabriel Clark good man! Keep at it. DM me when you post about the next deal to make sure I see it.