I'm excited to share with you the reason why everyone is going crazy over the MSA of Nashville, TN Market. 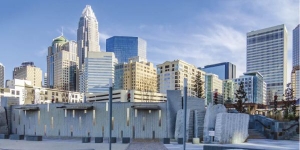 Hope you’re having a great day. Nashville Metro is home to nearly 2 million people and
more than 53,000 businesses and was named #1 MSA for
Economic Strength in 2020 (2nd year in a row) –
POLYCOM Corporation, Economic Strength Rankings. Metropolitan statistical areas (MSA) are delineated by the U.S. Office of Management and Budget (OMB) as having at least one urbanized area with a minimum population of 50,000. A great deal of the nation’s largest Metro Areas had year-to-date job losses. Yet, the Nashville MSA Region is a top choice for Multi-Family Investors, due to its rapid population and job growth, leading the nation for several consecutive years. It is the largest metropolitan area within a 5-state sector,
and the Country Music capital of the USA. According to the US Census, it grew 19% from 2010-2019. In
the Top 10 list of fastest-growing moving areas for 2019. With a diversified economy, it is ranked second hottest
job-market in 2019, up from 7th in 2018. What are Nashville’s MSA real estate market predictions for 2021? Let us look at the price trends recorded by Zillow over the past few years. Nashville’s Metro has a record of being one of the best long-term real estate investments in the U.S. Since 2015, the median home prices in the MSA of Nashville have appreciated by roughly 54.34% from $186,000 to $287,076, according to Zillow’s index. 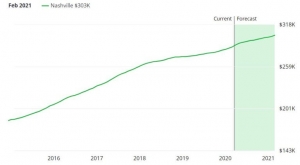 Nashville, TN real estate price appreciation graph by Zillow. It shows us the current home price appreciation forecast of 5.8% till Feb 2021. Close to half of residents in the MSA of Nashville are renters. The demand for rentals has
been steady because of this. With a historically low unemployment rate of 4.1%, compared to many
other parts of the States.

Nashville, TN Rent Trends Nashville’s Metro claim to the title was having the lowest unemployment rate of any metropolitan area with more than a million people. Nashville MSA real estate market demand will remain strong as long as people want to move here for work, and unlike some areas, they can actually find it here. The Nashville area economy includes thriving technology, service, education, health, and manufacturing sectors. Financial enterprises have also discovered the benefits of doing business in Nashville Metro, giving abundant employment prospects to bankers, accountants, and budget analysts. While the tourism industry is thriving, white-collar jobs are expanding rapidly, too. Almost anyone with a marketable skill can find a good-paying job in the MSA of Nashville. This trend is expected to continue for at least the next 10 years. Economic Resilience is Key for investing in Multi-Family.  Have a great day!
Warmest, Demetrius L. Brown
Log in or sign up to reply