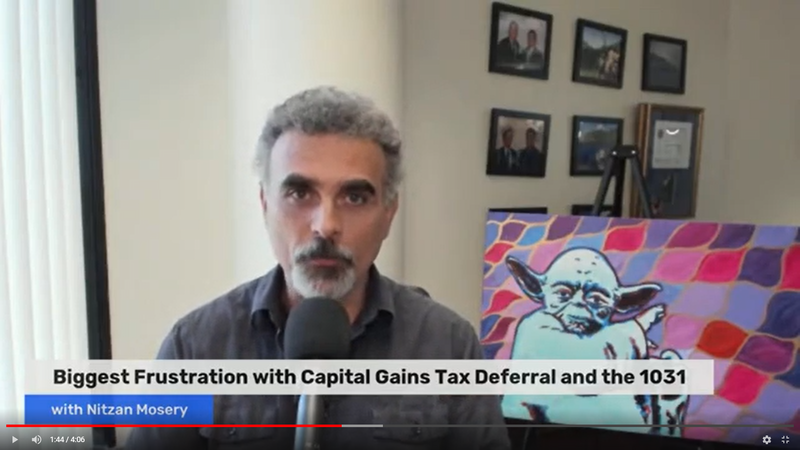 Welcome to the capital gains tax solutions podcast, also streaming Expert CRE secrets podcast. I'm your host, Brett Swarts. We're here on a quick teaser interview focused on the biggest frustration with capital gains tax pro and the 1031 exchange. And I'm putting here my new friend, Nitzan Mosery and he is out of the great state of Florida. Originally, from New York, he tells his entire story in the full interview, which you can see right now on YouTube, and soon to be released on iTunes. But in this episode, we're focusing like a laser on the biggest frustration with capital gains tax deferral, and the 1031 exchange. So, Nitzan, what comes to mind, you mentioned maybe this deal in Dallas that she did was a phenomenal deal. You bought it at five and a half million you sell it at 11 million, 21 months later on the episode that we talked about. But then there was this big tax. So what happened? And what was the frustration and why?

So, the frustration was that we wanted to do a 1031 exchange, but a couple of the investors decided not to. So, then we weren't able to go out and to take the entire entity and move it to another property and to roll back capital, and to save on the capital gains tax. That's pretty frustrating. And in today's market as well, with low inventory, and a lot of people coming into the market wanting to buy, you have such a short timeframe to do that 1031, when you close on a property, you only have 45 days to find your next project. And then you have 180 days to close on it. But to find a good asset to buy in such a tight market today. It's really frustrating and nail-biting.

Yeah, because of the shotgun wedding, right? You get engaged in 45 days and married and 180. And now we have a solution for that. It's called the deferred sales trust. In fact, there's one gentleman who in 2006, he saw the writing on the wall, he's in Minnesota Nitzan, and he's worth about $250 million. He hates the stock market, he just prints money in commercial real estate. But for the first time, like The Big Short, that movie in that book, he was like, you know, there's something weird here, I don't want to do a 1031. I mean, they're going to just pay the tax, or I'll do this deferred sales trust thing because it gives me a shot to defer the tax. So he did it. And he kind of took a step of faith and just tried something new he has never done before. And so he's sitting there and he puts it into stocks, bonds, mutual funds, very secure, very conservative portfolio, nothing too risky, okay. And five years later, the bank calls them up and said, Hey, you know that property you just saw? He says, Yeah, well, we just foreclosed on. And we're just curious, do you want to buy it back? He said, Well, maybe what's the price? And they said 60 cents on the dollar. So he says, Yeah, that sounds like a pretty good deal. So he sold, he had the trust sell out of the stock positions, and he put it into an LLC, and he purchased that property, all tax-deferred, not using a 1031. And I heard that story, like most folks that well that's too good to be true. Like No, he's done and he's worth about a half a billion now and he keeps doing these deals. He just did another one for over 100 million. So these are advanced tax strategies that you know, hear capital gains tax issues we're trying to bring to everybody, commercial real estate brokers, syndicators operators, and so you can go to capitalgainstaxsolutions.com to learn more about that. And for listeners who want to get in touch with you Nitzan and find out how you're doing brokerage in South Florida, how you're buying and syndicating deals, and doing coaching what's the best place for them to connect with you?

Sure, you can find me on my website www.investwithcip.com or via email. It's my first name, [email protected].

Perfect! Thanks so much, Nitzan and everyone looked for the full interview. Live right now on YouTube. Bye now.

Log in or sign up to reply
Related Resources Marketplace
Start Your House Hunt Right by Asking These Questions First
Is Doorvest a Good Option for Real Estate Investors?
How to Choose the Right Remote Real Estate Market for You
Home Purchase Fall Through? Don’t Panic: Here’s How to Get Your Earnest Money Back
What Is Underwriting? Here’s What to Expect
Resources Read, see, and learn more!
Real Estate Investment Calculators
BiggerPockets Blog
Path to Purchase
Mortgage Loans
Find a Contractor
Real Estate Agents
Hard Money Lenders
Real Estate Listings