I've checked around and haven't found much or heard much on that site.

Why would you want to invest in private equity versus a publicly traded stock or index fund? Publicly listed securities are so much better is so many ways.

They're a private REIT that is using Reg A rules to solicit new investors via public advertising. I've heard a lot of radio ads lately. Main strategy is to invest in NNN leased properties to national "credit" tenants, presumably to provide predictable cash flow with limited downside.

If you're just looking to park your money, it's not a bad option as the broker commissions should be low. But you're planning to use this money later, so why would you lock it up in an illiquid investment? I don't know the selling rules with these guys, but a private REIT does not have a strong secondary market so you're going to be tied up for a long time. I think there are better public REIT options out there that pay fairly stable dividends if you're willing to deal with price fluctuations.

testing it use some free money and will see how it goes.

I have not personally invested in Rich Uncles, but have reviewed their prospectus and the details on their website. As @Jim Groves mentioned, they're a PNLP ("public, non-listed REIT) using Reg A+ to offer shares to the general public. That's very similar to offerings from Fundrise and RealtyMogul, though Rich Uncles has I believe the lowest minimum among those three.

While they tout their low fees (3% vs. 7-10% in commissions for traditional PNLPs), there's are also a range of other fees outside of that 3% that investors should be aware of to be clear on how Rich Uncles in particular (and its affiliates) are compensated. For example, the REIT will pay its "Advisor" (which itself is a separate LLC, wholly owned by Rich Uncles) an Acquisition Fee of 3% of the price of a property when it purchases a new property. There is also a 0.1% monthly Asset Management Fee, as well as possible Financing Coordination Fees, Property Management Fees, Disposition Fees, Leasing Commission Fees, and Other Operating Expense Reimbursements.

As they say within the offering docs, "Investment in our shares still involves substantial fees which may exceed fees paid by other REITs for the same services." (And while there are limits imposed on some of those fees, in most cases the REIT's board of directors can unilaterally waive those limits.)

Those fees may be entirely reasonable, but you may want to be sure to review the offering docs in detail before proceeding.

On the liquidity front, there's another Reg A+ option you might take a look at, which is American Home Preservation. The investment is quite different than the REITs from Rich Uncles, RealtyMogul, and Fundrise (AHP buys non-performing mortgages in bulk at a discount), but the minimum is lower ($100) and they offer "best efforts" redemption to get your money out within 30 days if you need it (you take a slight hit on the return rate if it's earlier than 12 months IIRC -- 10% or 11% instead of 12%, but still a relatively flexible program). I have not personally invested in AHP, though intend to as soon as they re-open investments (they're digesting a big batch of new loans and have closed off new investments temporarily).

They're also being investigated currently by the SEC for their advertising practices.

@Tina Hu how has your testing gone so far? Any unexpected insights?

Rich Uncles is a great investment. I have nearly 60K with them, and I get regular installments back at 7% and 6.5% respectively. Actually, they are outperforming MogulRealty and FundRise, and I have money in both of those as well. None of the investigations these guys have been in have created problems only minor service corrections. They're truly legit. They'll call their investors regularly and leave updates about important developments. Take a look below for yourself. 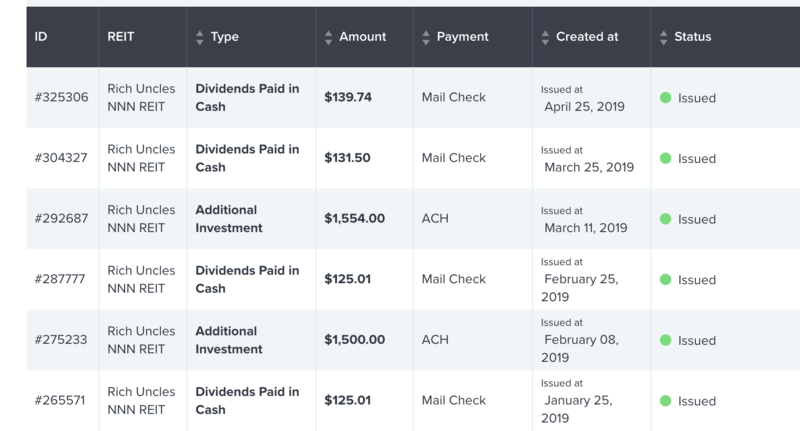 @Scott Koppel  I see that by investing $3054, your dividend increased by ~$15 - that is a return of slightly less than 6%, which may be acceptable to many investors.

Instead of saying 3% fees, they say 97% of the money is invested and the rest is used for running the REIT. @Andrew Savikas points out several other fees.

All these fees made me wonder if they can pay the advertised dividends.

@Tina Hu how has your testing gone so far? Any unexpected insights?

I have looked into it and it seems like a decent passive option despite all the fees. They are high but not that different from the kinds of fees and sponsor split you will see in direct syndications.

That said, individual NNN properties are very passive. So if you have enough capital to buy one with a long lease in a good location, from a national credit-worthy tenant, that would be the way to go.

@Rob Smith I think you can do better. Do a public reit if you want to go that route

Log in or sign up to reply
Related Resources Real Estate Crowdfunding Forums
How to Find a Bank to Refinance Your Investment Property
Your Largest Investor Backs Out 2 Weeks Before Closing—Now What?
How to Build a Million-Dollar Network of Private Money Investors
Should You Refinance While Interest Rates Are Low?
Forget Everything You Know: 15-Year Mortgages Are Best for New & Intermediate Investors
Resources Read, see, and learn more!
Real Estate Investment Calculators
BiggerPockets Blog
Path to Purchase
Mortgage Loans
Find a Contractor
Real Estate Agents
Hard Money Lenders
Real Estate Listings