Sign up to join Dawn Forshag Cazedessus, an Executive Business Coach and rockstar entreprenuer, and Courtney Fricke, an active investor and founder of Northshore Real Estate Investors Association, as they discuss effective ways that Real Estate Agents and Real Estate Investors can work together as we live in and prepare for a changing economy, including the coming Foreclosure Crisis that is looming.

You must fill out this Google Form in order to receive the Zoom Link.Google Form: https://forms.gle/d5oyBpzuigFuQZY38
Investors and Agents alike are welcomed to attend and participate in this free webinar. Spots are limited so make sure to sign up today!

Get to Know the Speakers More:

Dawn’s business experience began in 1998 when she was employed with corporate pharmaceutical giant, Merck & Co. The three years she spent under their tutorship laid the foundation for the genesis of her own small business. Mochaccino’s coffee house and café was birthed from a desire to achieve the American dream of obtaining ownership in her own company. She opened the original café in August of 2000 and then a second store in May of 2003. Shortly after the opening of that store, Dawn sold her first franchise store which led to eventually selling seven franchises that employed over 100 baristas and management teams. In 2007, Dawn sold this franchise corporation and embarked on a real estate investment journey. The year 2008 took a different turn for Dawn as she bought her first investment property and became a REALTOR®. She continued to grow her investment portfolio while also celebrating her first year in the industry as Rookie-of- the-Year! In 2012, her success opened another door and she became a productivity coach in the Mandeville market center. By 2013, her business had grown so much that she formed a real estate mega-team. Dawn continued her real estate and coaching success by taking the Team Leader/CEO position for the Mandeville Market Center and Hammond/Amite Business Center locations of Keller Williams. She is currently serving as the Regional Director for the Keller Williams Gulf States region. This gives her the opportunity to coach executive leadership teams and numerous people take a step…or two….towards their lifetime goals and achieve success.

Courtney has been investing since 2015 and has since flipped or owned over a hundred properties in the Greater New Orleans area. Since her start, she has flipped, held rentals, wholesaled, developed, bought and sold with owner financing, and handled complex title issues. Before taking the leap to work full-time for herself investing, her background was in non-profit work and then in commercial property management where she created and executed the management plan for the turnaround of a 100+ unit marina to prepare the asset for sale. As founder of Northshore Real Estate Investors Association and cohost of WWL's Home Improvement radio show, she cares about solving the real estate problems of our community through education for the public and within the industry.

You must fill out this Google Form in order to receive the Zoom Link.Google Form: https://forms.gle/d5oyBpzuigFuQZY38 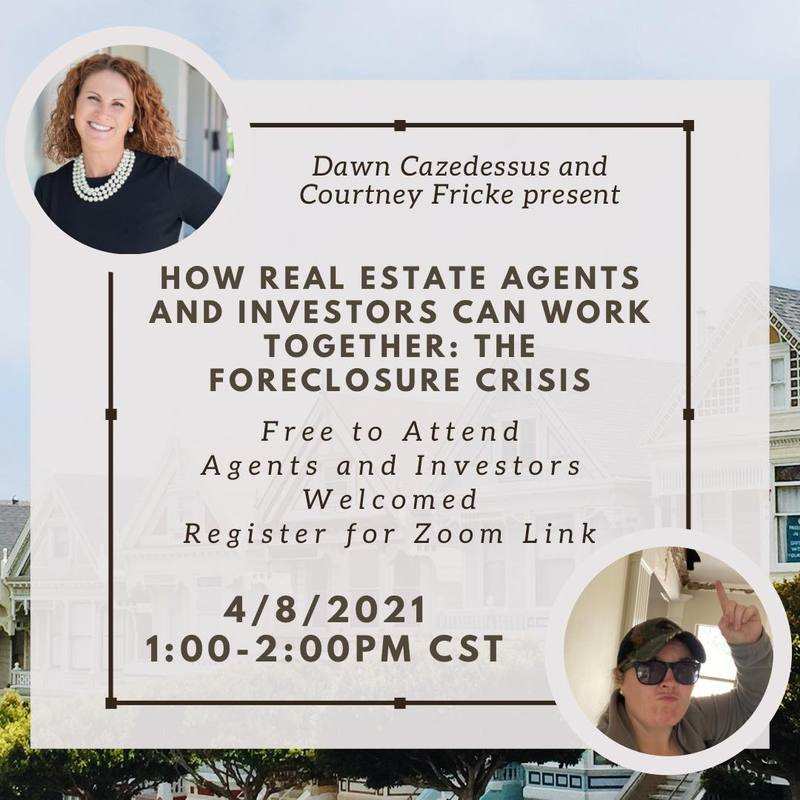 Nice topic, I will be there