This is my first deal bought through BP so I figured I'd return the favor by sharing my adventure.  I'll skip the details about myself and get right to the transaction.

*Will omit names from my story and pictures.  Living in South Florida I have learned never give out addresses or pictures of homes that are vacant, asking for trouble, sorry. Also, excuse the novel but the category listing did use the word "diary".*

Signed up for BP mid March, within 3-4 weeks found a listing on BP for a SFH in Houston that really peaked my interest.

Called up the seller (wholesaler) and immediately felt comfortable with them. They didn't try to sell me they just gave numbers, spoke about what services and help they can provide for a first time out of state investor. The house itself was very well taken care of by a retiring couple and didn't need major repairs. Small amount and short time frame from rehab. After taking time, too much time as it was my first deal analyzing with BRRRR lucky someone didn't pick it up, I advised them I was ready to take the plunge.

During final talk on numbers they received an alternate bid for the rehab at 9500 (1500 less than other bids) and we also settled at 103k purchase price.  When I asked for a reduction in price they were open and transparent about the contracted price and what they were making.  They agreed to take 2k off and that made me feel even more confident and trustworthy of who I wsa now dealing with.  Of course I would have found out their cost due to assignment but still they were right up front with it.

Plan is to buy, use the seller as my project manager and they will be my property manager as well.  This turned out to be a Turnkey type of transaction except I was getting in before rehab instead of after allowing me to take advantage of forced appreciation!

The seller connected me to a local HML who they in turn connected me to a local conventional lender. During this process I learned there is no seasoning minimum when doing a rate and term refi. So, as soon as I have a signed lease I can refi right out of the HML and not wait 6 months which is what I've been used to with cash out refi's. Not to mention on rate & term refi you can pull out 2% or 2k whichever is less I'm told so less money out of pocket.

Now comes the financing. HML orders the appraisal then sit and wait nervously to see. This was so nerve-racking. Buying sight unseen, in another state trusting people I've never met face to face only chatted over BP. Finally after waiting forever, was only 5-6 days, the appraisal came in:

Holly cow, it came in 25k more than what I was hoping for and 16k over what the seller said it would come in at. I struck gold and everyone is telling me I found a deal that doesn't exist anymore buying from resellers. I was so jacked but did my best to play it cool with the seller and HML. LOL, think I may have just blown my cover. This ARV would mean I will come out less money than expected for this project.

Now with a 175K ARV the HML was pretty much going to cover everything but they reduced the % on the loan to make sure I had some skin in the game especially being my first deal with them, I was fine with that.

10k from that loan went to escrow for rehab that I will draw on.

Once we're done rehabbing and get a signed lease I will then refi probably come out of pocket a bit more so I'm thinking if all goes well I'll be out roughly 10k. If I hit 1500 monthly rent (after appraisal came in I'm trusting the seller assumption on the higher rent) that would result in my first out of state buy returning 40% COC return!

With all of that being said, I've done a couple of deals and have a local SFH I rent out so although new to the game I know things can go south quick. I'm keeping my excitement tempered for now.

Rehab started on 6/1/17 and should take only 2-3 weeks.  I'll keep chiming in how the project goes all the way through signing a lease with a tenant.  Sorry I don't have any words of wisdom to share but I figured telling my story was a way to pay back the BP community for the help I have received so far.

Thanks for sharing! Be very curious to see how this turns out so please keep us updated!

@Nelson Leal Great job and nice ARV and COC return. Do you have this in the BP BRRRR calculator in PDF. I would love to see that.

Thank you very much for sharing Nelson!

Thanks for sharing @Nelson Leal , that's exactly what I've been trying to do. Which part of town is the property situated in?

That's awesome! I look forward to seeing photos when the rehab is completed.

@Curtis Harvey thanks. See below image for BRRRR results. The purchase and acquisition is pretty much down to the penny. Wont have exact numbers on refi until I have it rented but they are based on what I was quoted upon pre-qualification. I lowered the estimated rent back to 1400 to stay on the conservative side reducing my COC to just below 30%. 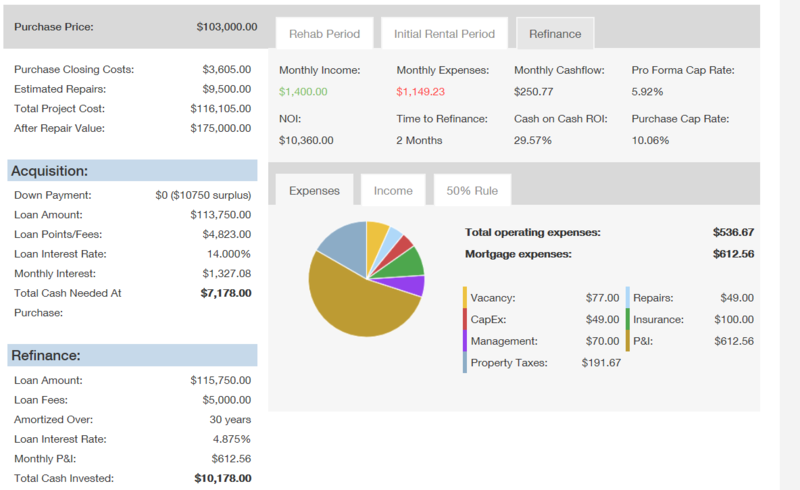 First nice surprise during rehab............Wood flooring under the carpet.  Good condition just some sanding, staining and we have wood floors at low cost! 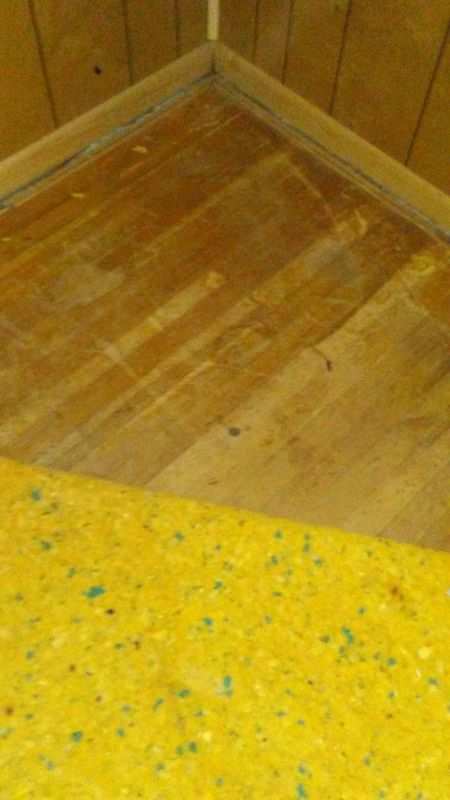 After closing last week was clean up.  This week paint, replacing doors, install kitchen counter top granite and a bunch of other misc items.  Probably will be able to start showing to prospective tenants next week during tail end of light rehab.

End of next week I'm flying out to check  the end result and take lot's of pics.  I'll post plenty of them then along with some before pics as well.

Looks like a great deal. One word of advice that was given by  @Brandon Turner in his rental property book is if you plan to rent use laminate over the hardwood, as you know it will get abused. Keep the actual hardwood floors protected and have them finished when sprucing up the property for sale. This way you only refinish once and what is there remains intact for you to cash out on later.

@Corey McKinney thanks for the tip.  I've also heard laminate is a nightmare with tenants due to bubbling up when they clean the floors.  I'm not  familiar with laminate, south florida seems to usually be tile or wood I've never come across wood on a property being rented unless higher end we usually just tile everything down here.

Any other opinions out there to share.  I have time to adjust rehab plans still.  This could be like a audience influenced project as we move forward.  In fact that is an awesome idea, I'm going to try that on my next project.  The property will probably suffer but it will be one hell of a story to tell and experience.

Related Resources Investor Deal Diaries
Do Your Due Diligence Before Digging Up Dirt: Investing in Vacant Land 101
Best Deal Ever: How a Postcard Gets the Phone Ringing
Meet the Investors: I Sold My Wife on House Hacking With a PowerPoint (& Soon We’ll Live for Free!) Featuring Joaquín Camarasa
Meet the Investors: How I Earn $800/Mo on a Single Property (That I Don’t Even Own!) Featuring Julian Sage
Best Deal Ever: How a 150-Day-Old MLS Listing Paid Off Big Featuring Joe Lieber
Resources Read, see, and learn more!
Real Estate Investment Calculators
BiggerPockets Blog
Path to Purchase
Mortgage Loans
Find a Contractor
Real Estate Agents
Hard Money Lenders
Real Estate Listings