Are there turnkey companies in Philadelphia?

So I grew up in Philly but haven't lived there since I graduated college. I visit a few times a year to see family and friends.

I'd love to get out of my own market, and maybe have a small tax deduction whenever I visit. I'm not yet at the BRRR-at-a-distance point just yet.

Hey @Chris Gordon , Id love to help but I don't 100% understand your question, what specifically are you asking?

@Sam Flannery no problem, my sense from the lack of response so far and your ask for clarification is that the answer to my question is there aren’t any.

By turn key I mean companies that acquire, rehab and then sell properties to buy-and-hold investors, typically also providing property management for those properties.

I see, so you're looking for companies that do the work above and you are looking to purchase turnkey properties from them?

@Sam Flannery basically, and ideally provide property management otherwise I’d have to seek that out.

Ok awesome, I sent you a PM, I have a guy who buys distressed properties in Deleware county at low numbers, rehabs them, and looks to sell around 120-130k. I also have someone who does this in the city but their numbers vary, I can get you in touch with them!

I'm doing my first deal with TCS investments in Philly which sells distressed properties, rehabs them and offers property management.

I suppose this is quite overdue, but I had only just closed on the house when I posted this. Several people have reached out to me over the year asking me for my experience so I thought I'd just post the facts so far.

I closed on a 3 family home in January 2019. Three 2 bedroom 1 bathroom apartments. Shortly after closing I was informed that we could add a bonus unit in the basement if we kept the ground floor commercial, as in office space, as part of an incentive from the city. I was moved by their transparency in relating this information to me, their willingness to create a fourth unit at the same cost, and relayed this information to those that reached out to me with enthusiasm. I was told the project would take about 9 months.

11 months into it, the status is that the interior has been framed out. Nothing has been done in exactly 2 months because we've been waiting on mechanical drawings for plumbing and electrical. A week ago they finally hired a new architect to render drawings but I still don't know if they're done. 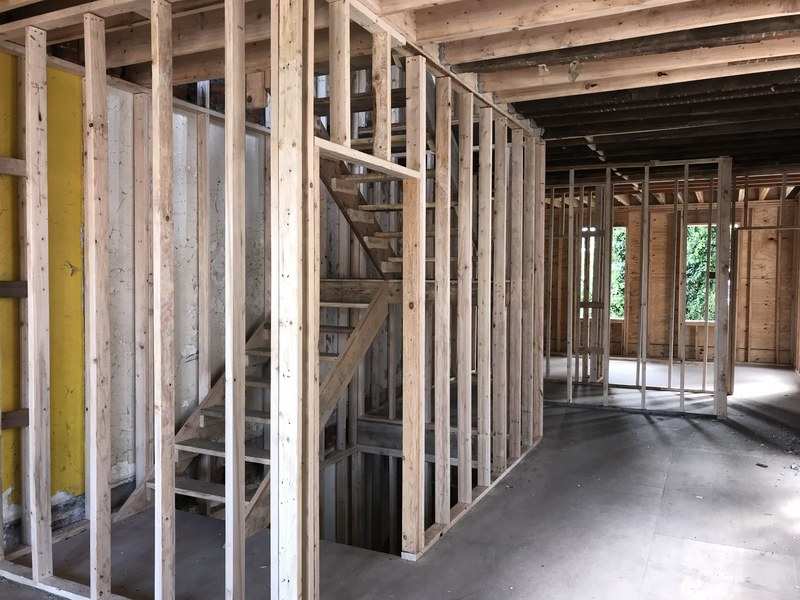 We faced another delay right out of the gate: I received make safe orders from the City, or they were going to demolish it. It turns out a prior owner had started some construction that was against code and the structure was deemed unstable. This took about 2-3 months to remediate.

TCS Investments is very good about sending weekly reports with photos, when work is being done. When nothing is being done they just drop off my radar. As I saw the project coming together I noticed nothing was being done in the basement, which I found odd given I was told there would be a unit there. It turns out the basement isn't dug deep enough in the back half of the house. There was no way to know that ahead of time, and I get that to build the walls lower in the back isn't really feasible. However, the basement in the front of the house could certainly support a one bedroom or even a studio. To this day I don't know if they plan on doing this and they do not respond to my inquiries like they did when I was a new customer. Their last official response was that they could put laundry machines in the basement so "I could make some income from the space that way!". I'm still pushing/inquiring about a small unit down there.

When I initially went out to PA to meet with a company representative I was moved by his enthusiasm, knowledge and deemed him to be trustworthy. I passed these thoughts on to a few people I sent their way and brought TCS several deals through them. I still feel that way about the representative but am disappointed they didn't keep me better informed of this recent delay and outstanding concern about the basement unit.

So, I'm frustrated that this is taking a long time, but in the end still have faith it will be a solid product. I'm sure I've lost at least 4 months in delays, which also ties up a lot of money of course. By contrast, I'm managing 2 mid-level SFH rehabs and find it difficult to keep up with from NYC. I feel more confident in the quality of work and abilities in TCS than I do, presently, in my GC. But, I'm also learning as I go.

I hope this helps, anyone with more specific questions can still always reach out to me.

I hope all works out. Please update us as the process continues. I'm looking for a home now to house hack and hopefully next year continue to expand. I'm from NY as well but I'm looking to invest in PA as well.

I feel your pain!  I suggest either spending a lot more time in Philly in the coming months or getting truly solid boots on the ground. I invest and consult in Philly and know how tough it is to navigate and to put a good team together here. I recently invested in an out of state project of course the location  played a key role in my decision but no less important - I based the decision on identifying a team I was comfortable with to manage the project.  Good luck - I hope you get it wrapped up soon!

@Jason Homa , it really stinks whats happening to you. I'm a newbie and i've been stuck in a flip for about a year now.(Stop work order, fired a contractor and just found out that my water line isn't even connected to the street:)  I'm inspired by your positivity and sense of calm, it's nice to know i'm not alone. Thanks for sharing your story with us and I hope it works out soon.

Hey @Bennett Schwartz , sorry you're going through that. Definitely seems to be a learning curve! That's one reason reason I went with turnkey. Just didn't expect the same kind of delays in that service.  Keep me updated with your own progress.

I try not to get too upset over the things I can't control, but do my best to change the things I can. As @Sheryl Sitman also suggested, I'm trying to get out there more often to monitor my own contractors work. He's been hitting me up with postponements and cancellations though. He comes from a very trusted source. But it appears he was trying to scale his own business too rapidly and got behind, hired some un-vetted subs. But I feel he's honest about it and trying to make right. It's tying my money and time up, can't move forward with the next deal until I also have proof of concept, so to speak. I do find it difficult to find boots on ground to keep an eye on things.

@Jason Homa @Bennett Schwartz @Joe Khan Wondering if you all would agree with the idea that a remote investor or a new investor should really not be relying purely on the investor - contractor relationship, but must have a reliable, trustworthy, knowledgeable intermediary looking out for his/her interests?

@Sheryl Sitman Well, this is one reason I started with a turnkey company. But since then I've gained much more confidence in the areas in which I'm investing, and the process. I belong to a very large REI group whose key members also invest in Philadelphia, which has been helpful. Lenders in our network also have firsthand experience there.

I've reviewed your website and am curious as to what exactly you mean by intermediary services. I would also like to know more about your contractors and construction team. I would be happy to chat sometime Monday, or whenever we can get on the same page.

When I hear, "we will add that in for free" I now know that means something is not right? How could some possibly build a full unit, I am assuming is around 800 sq foot for free?  There is no way that they have that much margin to play with from the beginning. I think this seems like another case of the contractor having good intentions, but not having the wherewithal to finish because of improper oversight of business or not knowing their numbers. As far as delays with make-safe, MEP those things do take some time in Philly, we have lost some months battling those.

@Jason Homa @Bennett Schwartz @Joe Khan Wondering if you all would agree with the idea that a remote investor or a new investor should really not be relying purely on the investor - contractor relationship, but must have a reliable, trustworthy, knowledgeable intermediary looking out for his/her interests?

Yes I agree. What services does your team offer. Please PM me.

@Sheryl Sitman , I definitely agree with that one. I do have my mentors that I speak to but they aren't involved in the day to day. Interested to hear about what you do.