As the traditional selling season wound down in August, the Austin-Round Rock MSA posted a 12% increase in closed sales from the same time last year and a 11% increase in median price to $335,000. According to the Austin Board of REALTORS (ABoR), Austin itself posted a hefty 14% increase in median price to $435,000. There were 22% fewer active listings in Austin compared to this time last year, with the broader MSA down a whopping 44%. Inventory in the MSA dropped to 1.4 months, which is now slightly lower than Austin’s 1.5 months of inventory.

Though it may be surprising or counterintuitive to many, the pandemic has thus far had no marked or lasting impact on the fundamental dynamic of the Austin area market. Housing inventory is critically low, and buyer demand is through the roof. Highly competitive multiple offer situations are the norm. Winning buyers often pay well above the seller's asking price and wholly or partially waive their right to terminate due to an appraisal shortfall. Without an extreme increase in new housing or listing inventory, or an extreme decrease in demand, (or both) it appears that Austin's extreme seller's market is here to stay.

Here are basic stats on residential sales for August 2020 for the City of Austin and the greater Austin area: 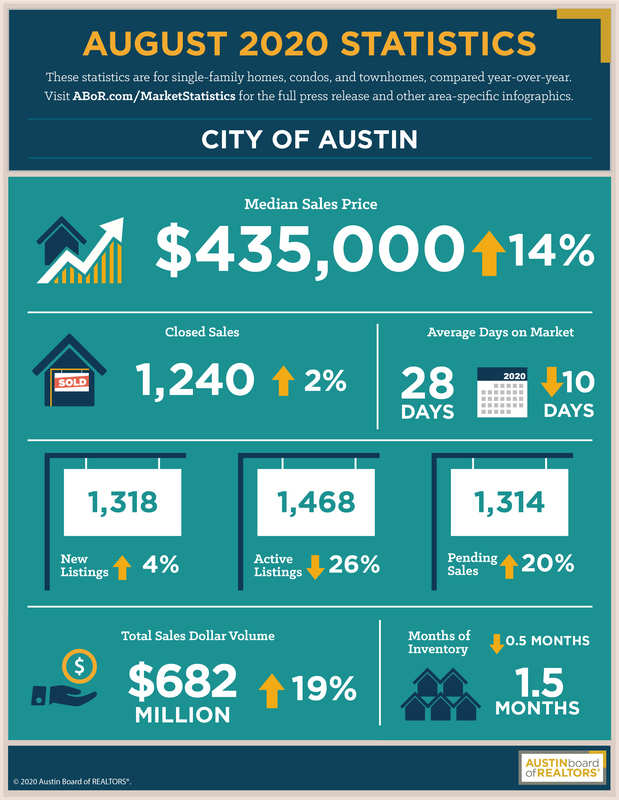 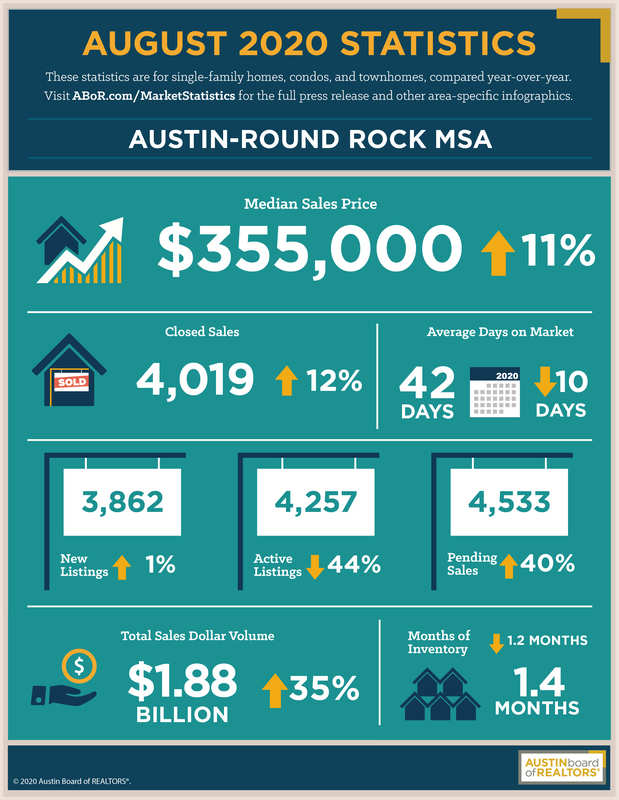 The Austin area market, like most others, is highly seasonal. New listings typically peak in June or July. In the chart below, a noticeable and abnormal dip occurred in April/May during the economic shutdown. New listings still peaked in July 2020, but at a level lower than previous years. 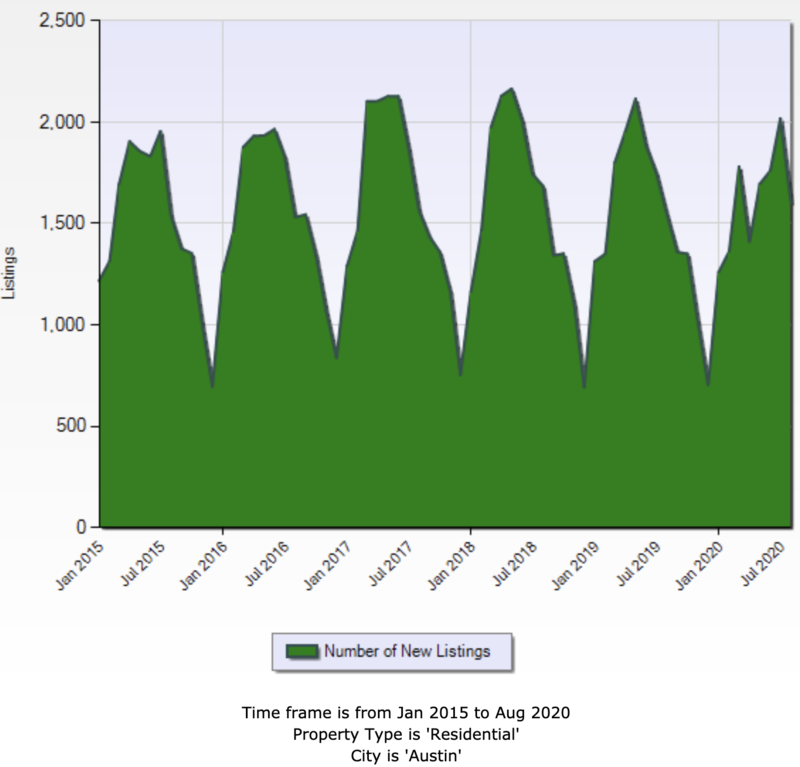 If you couple the above with extreme demand on the buying side, you get a chart like the one below. Despite the lower listing inventory, buyers closed on more of those listings than they did in any of the recent years. Some of that was pent up demand from buyers that put their plans on hold the few months prior. However, this shows that buyer demand in Austin certainly hasn't collapsed in the face of COVID. 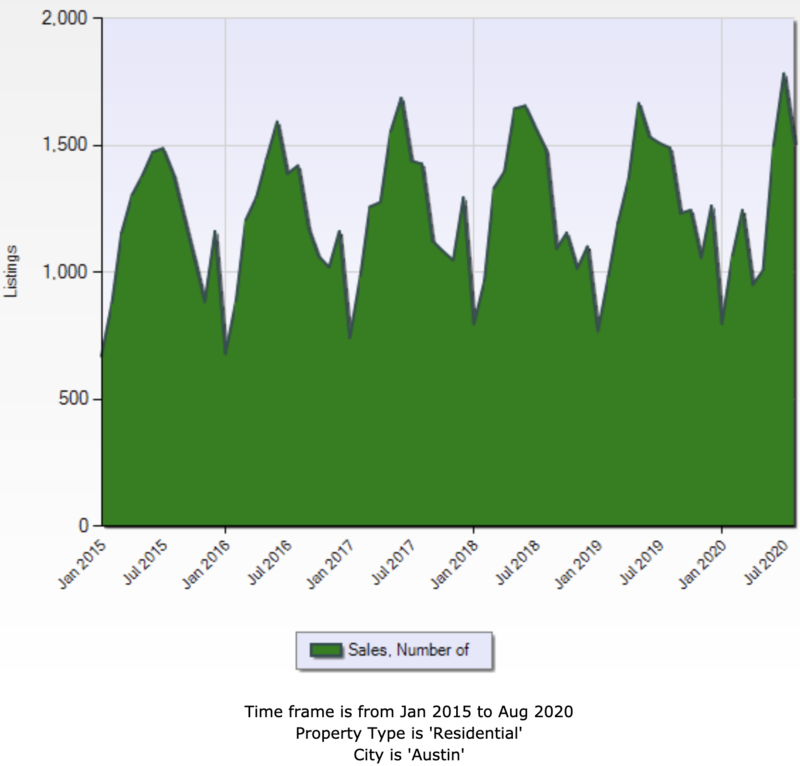 There are a number of reasons that help explain this current dynamic, historically low interest rates being one of them (see below). However, we are also in the very early days of some transformative changes in consumer behavior, workplace structure, and housing preferences. For example, it's worth noting that Austin's suburbs and outlying areas saw a 12% increase in closed sales and a 40% increase in pending sales last month accompanied by a 1.2 month decrease in inventory. Meanwhile, Austin posted a 20% increase in pending sales with basically flat closed sales (2%). Inventory outside of Austin is now technically lower than inside Austin (1.4 months vs. 1.5 months).

While interest rates will not be this low forever, the Fed has signaled that for the foreseeable future it intends to pump liquidity, keep rates low, and overall serve as a bulwark against a severe and lasting economic collapse.

Finally, I’ve shared charts of passenger traffic at Austin-Bergstrom International Airport over the past few reports. It drives home how rapidly and severely the Austin area economy changed and also shows a traffic slowly creeping up from the bottom. It’s an imperfect proxy for at least some portions of the greater Austin and Central Texas economy. However, I’m not an economist and don’t know how broad of a conclusion we can actually draw from charts like these. 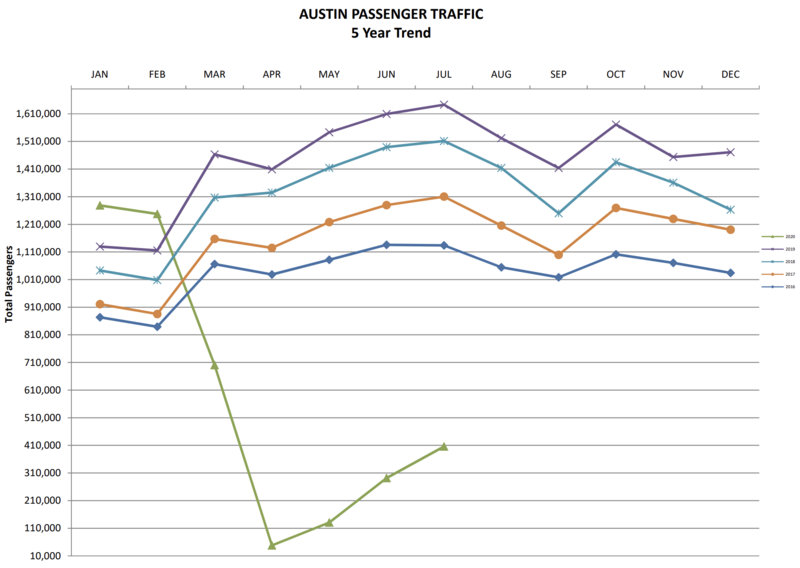 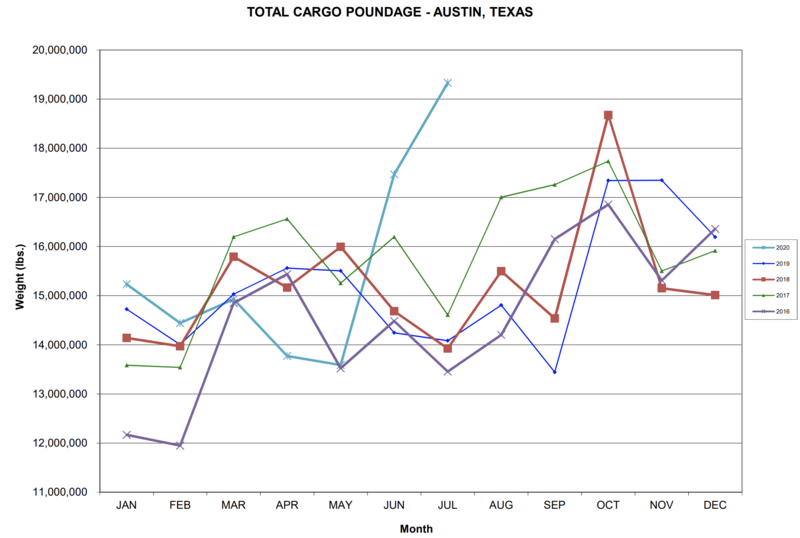 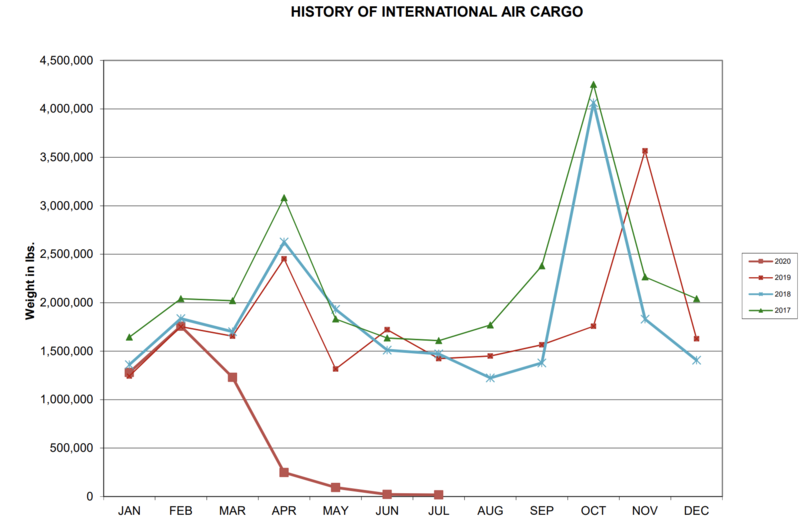 Thanks for sharing this and putting it together. Quite an interesting report and it seems like the Austin dynamic is changing quite rapidly.

With Austin gaining a lot of attention for relocation from other cities and influx of job opportunities are you expecting to see new construction to increase? How do you see that affecting the existing home prices/inventory?

@Brad Gresock Just to chime in on your question, new construction for single-family homes has not kept pace for more than a decade. The Austin metro is adding 55k-60k people per year, and only 20k single-family homes are built on average per year. Larger multi-family apartment complexes are picking up a lot of the remainder. It will be hard for the homebuilders to keep pace because they are finding it harder to find enough land, get through permits, and still provide the number of homes needed. This is why the prices will likely continue to climb - supply vs demand.

Definitely makes sense. That is great to hear for home prices. I didn’t realize there was that large of an influx of individuals. Thanks for the insight! The Austin market has always interested me.

@Brad Gresock I actually just looked up the new construction stats. It's closer to 18k new homes built per year. Even lower than I previously mentioned.

Does anyone have access to the stats on building permits? I'm wondering if some of the growth is shifting to East and South Austin with infill and gentrification. East Austin is ripe for this activity as West Austin is becoming fully developed. Less environmental red tape on the East side of town.

@Pete Harper I don't have the permit numbers, but I can attest to the growth heading northeast, east, and southeast around Austin. There is land for days and it's cheaper than west, as you mentioned. The 130 toll road built about 10 years ago has really helped spur faster development on that side. It is also focused on more affordable housing, whereas the west side still leans higher income and luxury properties.

@Pete Harper This is a very good source for permit data... Its not segmented though by area. One will have to dive further into the data to get that info. https://www.recenter.tamu.edu/...