Purchased from a wholesaler using hard money lender and equity in home. House had a terrible smoker and cat lady which made it a complete gut job. Great learning experience. Today the house is worth 180-185k. Had to test these strategies I heard of on Bigger Pockets to see if they were true and they are! I made a lot of mistakes on the repairs and overspent due to my lack of understanding of what needed to be done and what is not critical.

I met a wholesaler looking at a house on the MLS. He brought me the deal and it met the criteria I wanted and in the area I wanted.

Hardmoney to purchase then re-financed into a conventional loan. Sort of a BRRRR but I put some of my money in it too.

The house had a heavy smoker, WAY too many cats and some how a mice infestation. We had to gut everything and killz the property twice before we could start.

I learned a lot on what I should NOT do for repairs and what to look for.

Don't hire the cheapest contractor/ bid he is much more expensive and annoying.
If it aint broke don't fix it!
if you can patch it don't replace it
This deal probably was a better flip than rental but it would have helped to do repairs right to maximize my profit

Did you work with any real estate professionals (agents, lenders, etc.) that you'd recommend to others?

I worked with a wholesaler , HM lender and conventional lender for the refi. Asked a million questions bc it was my first deal and they were all instrumental in my success. 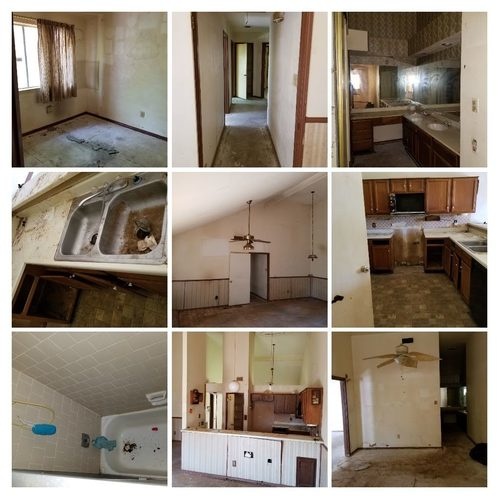 Did you do much of the work yourself? If so, how did you learn it?

No, I did not do most of the work myself.  The Hardmoney loan I got was for 130k so it helped cover a lot of contractor fees and I still had a lot of out of pocket costs due to the fact I had to fire my first GC.  Not the greatest spread but I learned a ton!

@Aaron White I've had mixed experience with contractors myself. I've learned that while a great contractor will usually provide a great experience, a good contractor can easily give you a bad one with the wrong preparation. Three things I learned the importance of:

Any nuggets of wisdom learned from the bad GC experience?

The permit point you make above is a good point I didn't consider. I did get 3 bids but foolishly went for the lowest.  The things that went well were:

1) I had them give me a scope of work which I fine tuned to be more specific.

2)I told them I would be paying the contractor by portions of the scope of work being completed.  Everyone wanted to be paid by number of days which I have heard many investors got burned on.  This kept me from loosing more money. It also aligned nicely with how I would receive hard money payouts.

Some things I learned with the GC:

1) If you break down the scope of work and find your GC is priced too high on a specific area you can ask them to drop that and outsource it yourself.  ( I did this with flooring and Granite counter tops)

2) If your GC says he can do ANYTHING you throw at him question it.  He also was not concerned about his bid going up as I added a few things.  Should have seen the red flag but didn't #rookie

3) I assumed that since he wouldn't get paid until portions of the scope were complete that he would be self motivated to complete the work in a timely manner.  I was so WRONG! This ended up costing me one month of hardmoney interest which was not cheap at all! Not only did I loose $1,200 in Hardmoney but I lost 30 days in rent which is $1,600= $2,800.  With my second GC I clarified he would need to be done by certain dates in a written agreement and explained this was one of the main reasons I took his bid even though it was the higher one.

Some things I learned about repairs:

1) if they smoke you need to tripple your paint budget!  I priced it at $1.50/ sqft thinking I would be ok but didn't think about Killz being needed.  Rooking mistake on an 1,800 sqft house that we had to Killz twice before we could paint.

2) if the plumbing has a leak just patch it don't replace the whole system. I was used to purchasing FHA previously and didn't realize conventional lenders don't have as strict of guidelines on inspection prior to refinancing. I could have saved 9k right there!!!!

3)I replaced things like doors when they really just needed paint.  Watching too much HGTV and didn't realize that these things don't impact rental decisions much at all.

4)Really large projects always have a lot of unplanned expenses and extra work.  I took most of the extras on myself to stay in budget.  I easily had a good $2,000+ of extra work I should have planned on for little extras.  Tons of extra clean up, yard work, hidden mold etc.

5) I brought all of the supplies to the property to save money.  I did a really poor job planning and getting my first contractor to give me a concise list of things needed.  This resulted in too many trips back and forth.  On future jobs I will plan more with the scope of work and get a complete list.  If the list is too big to fit in my truck I'll get a uhaul for $50 and make one run instead of 20 or just let the contractor do it.  I now realize why they charge for this, it is a pain.

Sounds like you learned a ton and still came out ahead financially - that's a home run to me! (Even if it felt like a headache most of the time.)

Congrats and thanks for sharing your insight.