The house prices under 300k in Las Vegas areas have been up every month.

On MLS, I see some properties in an area have $3k or $5k increases monthly last few months.

What are your thoughts?

I was following the market closely a year ago and didn't find it to be rising that quickly. Is this a new thing? Are you seeing these changes widespread or just certain areas?

I won't be able to research the whole city.
I saw it happen in a few areas.

I'm not sure if it happens in "those" few particular areas only, or widespread.

It could happen in just a few areas only.

Would like thoughts and more eyes from all different of you to see the trend better...

This is one of the areas I see on Redfin.

Maybe it just happens in this particular area only... 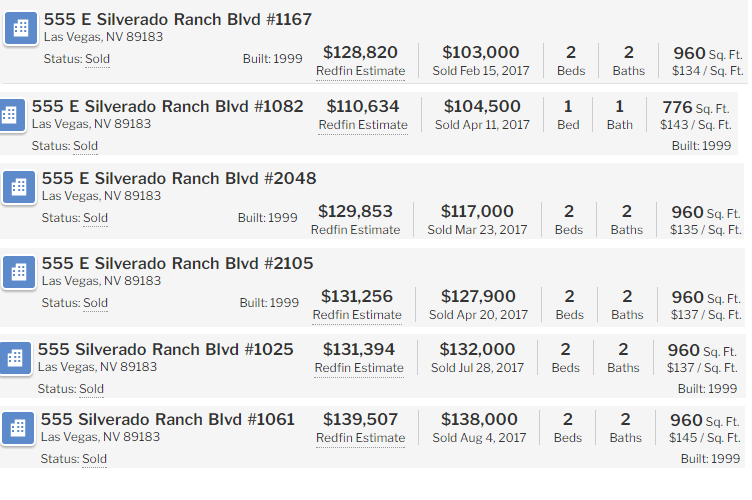 Hi @Account Closed for reports or you can connect with almost any title company that can give you various sales reports so you can get familiar with the market sales across the Valley.  Try Fidelity National Title first as they are the largest title company in Vegas and their marketing department kicks out awesome reports to those who request them.


This is one of the areas I see on Redfin.

Maybe it just happens in this particular area only...

The condos have been on fire. Those in silverado ranch have been very good,plus check out the rise of the Manhattan Condos unbelievable. The prices of sfr have risen so quickly that the have brought the condos with them. The stadium is attracting a lot of buying around the strip south end  etc

The rent rates absolutely cannot keep up with the constant increase in housing cost.

My family has multiple properties in Vegas and two flippers. All are crushing it. FYI I just visited the Seattle area It's even more pronounced there.  Just saying..all of my new money is going there. Hope this response is helpful. Jim

I'm interested in purchasing sfh in Las Vegas to hold and rent forever. Looking for houses under 250k, which areas do you think are best?

Henderson and Summerlin are the best and most expensive areas.

I just bought a house here, few weeks before the Raiders close.

The asking price was 11K over appraisal, which seems to be common in fast rising areas, the comps can never keep up. (don't worry I didn't' pay a dime over appraisal LOL)

I moved here for economics, I personally expect home trends to increase for a few years with normal hiccups along the way, I'm riding the wave upwards.

My question is, How sustainable is this run up in prices locally?  It feels like 2006 all over again, prices are getting pretty crazy.  Has anyone noticed rents going up?  My neighborhood in Green Valley has had at least 3 houses this year sit vacant for months due to ask price for rent too high.  These are houses zoned for very desirable schools as well.

Henderson and Summerlin are the best and most expensive areas.

The North LV and East LV areas certainly are rougher than Summerlin and Henderson but they're not exactly war zones.  There are nice areas and sketchy areas within those parts of town just like a lot of other areas.

And you have to sort of balance that out with what you're comparing it to.  Summerlin is a huge master-planned community with tons of gated communities and high home prices.  Personally, it feels a little too Stepford Wives to me which is why I chose to live in Henderson.  But even Henderson is a highly planned out community with pockets of insanely high priced neighborhoods.  It's just a little less master-panned than Summerlin (IMHO).

Obviously if you're looking for your own primary residence and you want to live in an upscale neighborhood, sure, pick Summerlin, Henderson, or Southern Highlands.

But if you're looking for investment properties, North and East Vegas are going to have a lot more opportunities.

For instance, I just threw N. Summerlin into Zillow and set $250K as the top price and it returns 15 homes.  Same search for North Las Vegas shows 802 homes for sale.