I have commented on others posts regarding MI and Oceanpointe, etc.  And now, let me share my fun experience.

My husband and I refinanced our home to purchase a single family in December in Indianapolis.  The seller was Oceanpointe although Clayton is the spokesperson and all discussions and contracts were through Morris Invest.  Purchased site unseen although there was a video of the property that showed the home in detail.

Fastforward, the renovation process was quiet and I didn't ask for updates, rather I waited until it should have been close to completion to reach out (purchased Dec 18th or so) and then heard no response.  I knew, deep down, that we were being screwed. NO one returned calls, emails and then I received city violations notice in the beginning of March for 5K for the exteriors condition, emergency boarding of the property (multiple times) and a variety of other issues.

At that point, I spoke with Clayton who assured me that Oceanpointe would complete all work as promised and deal with city violations.  Fast forward to the following month... I reached out to Clayton again and was told that Oceanpointe was basically not following through with any renovations and that HE was going through with developing a property management company (Blue Sky) to transfer the property and complete the renovations that weren't done by Oceanpointe.  I did the paperwork for transfer to Claytons property management team and thought that Clayton would stand by his word to do everything originally promised to us.

The city violations dept (Daniel Smith) is a hero because he went to the home April 24th or so and took tons of photos to detail the condition of the home.. he has been the most helpful person to date and I am super thankful for him.  I then sent the photos to Clayton to give him a heads-up about the extensive work still needed to be done and he again assured that the work could get underway once his crew "have legal ability to get into he house, we'll address the remaining items that need fixing and get it done."

She then told me that Clayton filed a complaint with the attorney general against Oceanpointe and that he is suggesting that everyone else do the same.  I received the forwarded email. (attached) 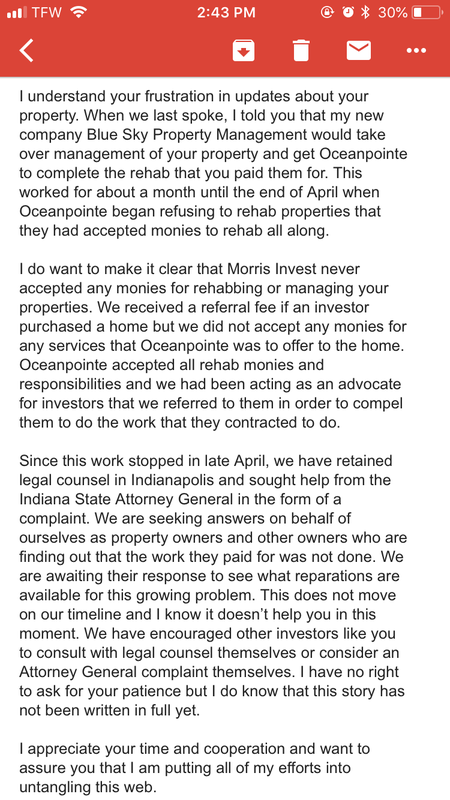 NOW, here I am left with a house in disrepair, continuing to accumulate city violations (next inspection is due May 31st), renovation insurance, nuance fees for emergent boarding up the home and garage due to squatters.  Not to mention (and YES< I'm pulling this card), that I have a very limited budget, have 2 young kids, and am 7 months pregnant dealing with this issue from the east coast while my husband works full time, me part time, while taking care of our children on a tight budget.  I just got the documents from the attorney general and reached out to the city to let them know what is happening.

In the mean time, I don't know what my next move should be in this limited capacity that we have been placed in.

With a limited budget....Id suggest cutting your losses and selling for what you can. Only a matter of time til these guys have an episode of American Greed on cnbc.

@Colleen Cimo I moved my property to PM company Home River (Brick Lane), but have yet to be directed on how to get balance out to my personal bank account. & yes, no rehab has been done to my property since acquired in March 2018; but I do have a tenant.
Log in or sign up to reply
Related Resources Ask About A Real Estate Company
7 Novel Ways to Use Credit Cards for Real Estate Investing
The Rap Against Real Estate Investors and Minorities
Home Prices: Déjà Vu All Over Again?
Its 2014: Rents and Acquisitions on the Rise
Old Cars, Baseball Cards, and Real Estate?
Resources Read, see, and learn more!
Real Estate Investment Calculators
BiggerPockets Blog
Path to Purchase
Mortgage Loans
Find a Contractor
Real Estate Agents
Hard Money Lenders
Real Estate Listings