It's now $765k in high cost areas like Oakland, LA, DC, etc. Below is my rough draft cheat sheet, with no warrants made as far as accuracy or anything else. No, I don't believe this will impact anything more than any other year that the exact same thing has happened, to answer your question. 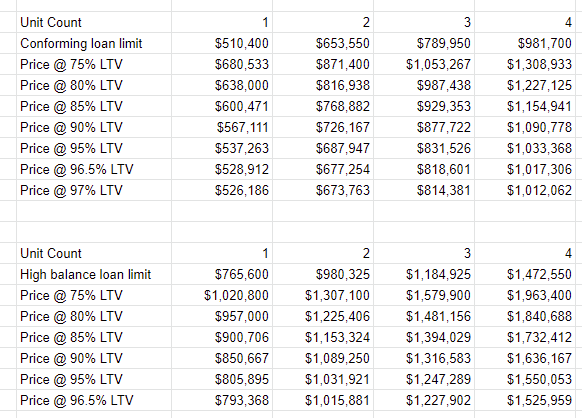 Great cheat sheet, @Chris Mason , thanks. Yes, with the 150% above base limit in high-cost areas, it really increases affordability.

Great cheat sheet, @Chris Mason, thanks. Yes, with the 150% above base limit in high-cost areas, it really increases affordability.

In the short term, yes.

Medium term, prices for "high end but entry level" homes are always sticky about that purchase price which results in loan amounts right at the limit.

As of a month ago, that same price point would have required some combination of 10% down, reserves, higher credit standards, lower DTI, etc (different banks had/have different combos of "pick your 2 or 3 from that list"). As a consequence, a lot of homes had their prices "sticky to" the old price where 5% down did the trick.

And so it continues, year after year. The kicker is that 4 out of the last 5 cyclical recessions in my market, prices still continued to go up during them.

Very interesting! Generally, do you think the lending is getting too liberal again or is the underwriting solid?

Very interesting! Generally, do you think the lending is getting too liberal again or is the underwriting solid?

Agency underwriting is solid. Plenty of predatory activity of course, it's just not where it was in 2007.

Where we see emerging predatory activities isn't in the "giving loans out to those that can't make the payments" segment, it's in the equity harvesting schemes of various sorts. "You put 10% down, we put 10% down, then when you go to sell we get 40% of the appreciation!" -- except of course it's never written in plain simple language like that (because you would correctly respond with "wait, so I put 10% down and take on 80% debt, and you come in with only 10%, but get 40% of the upside?!"). Unison is one example. That's "latest and greatest."

More established is dumb pointless refinances. Save $17.32 per month ("omg $17.32 x 360 = $6,235.20!!!"), but go $20k more in debt in the process. Nothing new here, you get the junk mail if you're a homeowner just like I do. Something like 60% of my "hey Chris should I refi?" phone calls end with "nah you're all set, not worth it, if you decide to ignore my advice give me a call and show me the proposed numbers and I'll show you why it's dumb" and, of those, I'd say about a quarter of them I'll check 2 months later and they refinanced with someone else. shrug-no-one-wants-to-listen.jpg.

There's also a lot going on with reverse mortgages. For whatever reason (AARP might have lobbied for this...), the CFPB/Congress exempted adjustable rate reverse mortgages from the LO Comp rule, meaning that with basically ONLY these types of loans, can the loan officer get paid more if the consumer (your elderly grandpa...) accepts a higher interest rate or worse terms/fees/etc. Someone focused on this can do a SINGLE reverse mortgage, screw someone, and make what I'll make on 5 or 7 vanilla home purchase mortgages.

So it's not really "can they make the payments?" today, it's more you blink 3 times and "whoa, where'd my equity go?!"

Everyone (watchdogs, consumers, etc) has their eyes on the 2004-2007 type stuff, so obviously that's no longer where the action is. Magic show at a children's birthday party: everyone is watching the right hand because that's where the "magic" happened the last time, but the magician knows that, so the left hand is where the funny business is going on this time around.

Thanks @Chris Mason - You have some great insights! Would you like to be on my podcast sometime, you would be a great interview.

Log in or sign up to reply
Related Resources Private Lending & Conventional Mortgage Advice
5 Reasons to Utilize Your Equity & How to Safely Invest It
Mortgage Lending During COVID-19: What Homebuyers Need to Know
How I Raised Over $1 Million During a Pandemic—& How You Can, Too! (Part I)
Private Money: How to Choose the Perfect Lender
The 2% Rule: Fact, Fiction, or Feasible?
Resources Read, see, and learn more!
Real Estate Investment Calculators
BiggerPockets Blog
Path to Purchase
Mortgage Loans
Find a Contractor
Real Estate Agents
Hard Money Lenders
Real Estate Listings