I know the Casa Grande inclusion is a little throwing but I have faith in the growth of that market long-term (the kind of investing I am doing). My general question is just what can I look forward to in Mesa or Glendale. If anyone has experience in Casa Grande that insight would be awesome but I understand if its limited data points. Anything specific about Mesa or Glendale that would trip me up? Haven't yet picked a property so still in the research stage. Any help would be great!

I like East Mesa, the area around the airport (Mesa Gateway) should explode with jobs over the next few years.

Those jobs and the road improvements (freeways) are going to really change Queen Creek and San Tan Valley also.

Casa Grande should have a bright future as well, maybe even Coolidge.

I think Casa Grande is going to continue going up. Median sales price has gone up 12% over the past year and with the theme park project moving along I think they will continue to go up. You can actually pick up decent rentals in the area as well, close to the 1% rule depending on your acquisition price.

Mesa, AZ had an appreciation rate of roughly 5.96% last year. The median home price started off 2017 at $218k and ended the year at $231k. I think you're going to see continued growth into the future because that's still roughly $16k below the median sales price for the entire Phoenix Metro Area. Glendale is tracking right below Mesa at $220k and they experience the same ups and down throughout the season.

Overall, a rising tide lifts all boats, and Phoenix lead the nation in population growth last year. So there probably won't be too much of a difference in appreciation between Mesa and Glendale in that regards since they're both priced similarly.

For Mesa, I would stick to the north and far east side if you can. Taking a look at the violent crime map over the past six months, the large majority of it is grouped on the western side of town. See below:

Glendale on the other hand doesn't seem to have any areas relatively free from violent crime like Mesa does, so if I had to choose between the two I would pick Mesa because it's less likely you'll accidentally buy in the wrong part of town: 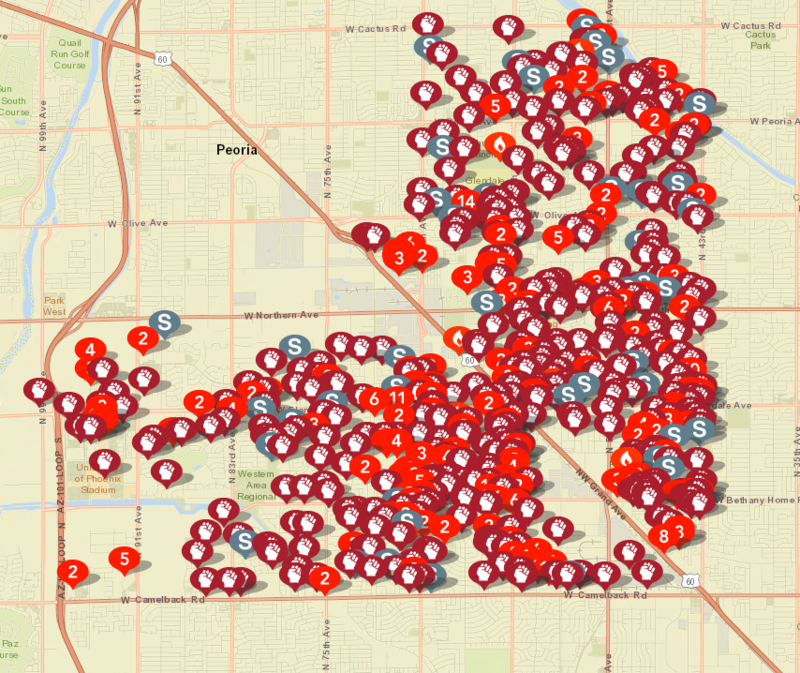 Casa Grande on the other hand is relatively light. Being a smaller city, it doesn't attract as much homelessness, gangs, and general poverty as larger metros do. 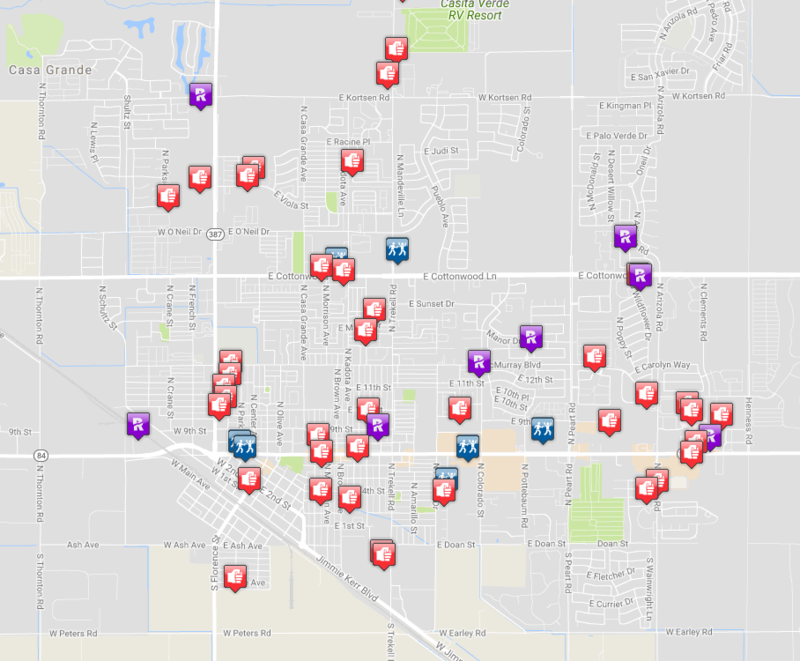 The thing about Casa Grande is many people coming from out of state are going to say "Casa What?" and have no idea where that's at. Being a smaller market it will also have less jobs, and let's face it... probably the most important thing about deciding where to live in the Phoenix metro area is proximity to work.

And that's why it's a "cool" market according to Zillow, while Glendale and Mesa are "Hot" and "Very Hot"

So taking all of the above into consideration, I would confidently say that Mesa is your best choice. You can buy in an area free of crime, it's a hot market so housing prices are going up, and it's bringing more jobs into the other as the other posters have stated above.

The only real positive I see to Casa Grande is (1) it's cheaper, so perhaps you might get better cashflow or ROI, and (2) it's in the path of the Arizona Sun Corridor (Phoenix to Tucson) so there is the potential that over the next 30 years as the area doubles in population from 6 million to 12 million you might experience some significant appreciation.

Hope this information helped! If you have any more questions just reach out and ask and we'll all get you pointed in the right direction :-)

Personally I’d stay away from Glendale for the long game and here’s why. Property value especially around Grand Canyon University has gone up. The college has poured tons of resources into the community but I don’t trust it long term. The guy running Grand Canyon is the same guy who was running University of Phoenix and while that place grew like crazy while he was there it kinda tanked after he left. So if your doing a quick flip and you can find a deal I’d say go for it but I wouldn’t personally tackle a buy and hold in that market because I think the appreciation is fake and could be a bubble based on the University. Just my two cents. Glendale’s got a lot of problems with drugs and crime as well. Ask any cop. I’d especially steer clear of Grand Ave and pretty much anything south of Grand. North Glendale has some potential but the spread is usually pretty thin from what I’ve seen. Happy Hunting!