I recently had a very bad flooring contractor experience I wanted to share.  Lesson I learned, DO NOT make final payment until you have approved the work and are happy with it!!!  DO NOT hire people who don't have credibility ratings and a reputable name, or hire at your own risk

WOW, where to start..... a month later and my floors still aren't complete. I've had to cancel my moving crew 3 times now.

I hired Ralph to refinish my hardwood floors. He came to my house, looked at the floors and gave me a quote. He came a few days later to do the job. He seemed like a nice guy, saying "we're cool man, I trust you, I got you, you're good people, etc etc." After 3 days he mentioned the floors were in really bad shape and there was some type of waxy coating which is why it took so long (as an experienced professional, something he should have noticed from the start I would think). He completed the job. Once I reviewed the work, I noticed there were several issues. There was a 12"x12ft strip where the stain was very inconsistent from tthe rest of the floor, there were polyurethane drip marks, bubbling from the polyurethane, parts of wood which didn't get any polyurethane, staples and nails left in the floor, all together, about 10 spots which needed to be corrected. Gaps in the wood which weren't filled, didn't even buff the closet. He came back a few days later (at this point I didn't pay him yet besides the $500 down payment) to fix the errors. He re-stained some spots and put polyurethane over the errors. Once the poly is put on, it needs to be buffed which means it needs to dry...which means thats needs to be left for another day.........After he started to fix the corrections, he made it very clear he expected payment at this point, so I paid him the full amount of the project NOT realizing that I already gave him the 50% down payment which I told him about within a few days of noticing my mistake.

A MONTH LATER!!! and ****8***** blown off appointments and he still has not come back to fix the floors and give me back the overage I mistakenly paid him. He's accepted multiple new projects since he "finished" my project, he's told me several times he couldn't get to my house because he was working on others. As an already paid customer, Ralph, if you haven't completed 1 job, don't start another one, don't argue with the customer, if you made mistakes, you say "sorry Mr. Customer, i'll fix them asap" until they are satisfied. He has missed appointments now because "his tire blew out, he needed brakes, it was raining, he fell asleep, he forgot, he had a bad day, he was backed up...the list goes on and on. Ralph, why don't you tell another customer THEY have to wait because you need to finish a job you started long before theirs!

After speaking with Ralph recently, he claims that I have been "harassing" him. Well, after blowing off a customer 8 times over the course of 3 weeks, and not paying them the money you owe them, i'd say yeah, most people are going to start to light up your phone! I have a signed contract by both of us stating that I paid him in full, PLUS the check image proving I over-paid him by $500. He claims I tracked mud on the floors (while it was covered in saw dust), in all reality, it was a few pieces of DIRT, which i knew could be easily vacuumed up with the saw dust.  He claims I was not available for a few of the appointments, which is comical because I usually left the back door open for him and other contractors to enter my home.  Not once did he show up and say "Hey, where are you, im here" or "im heading to your house later, can you make sure the door is open".  I could always make sure the door was open (if it wasn't already) or leave a key around, or make sure someone in my family could open the door.

The last POV is that most of these errors weren't because of condition of the floor, but how they were re-finished.

Lets let the investment world decide...am I being picky?

DO THE HONORABLE THING, OWN YOUR MISTAKES, MAKE IT RIGHT, FINISH THE JOB! 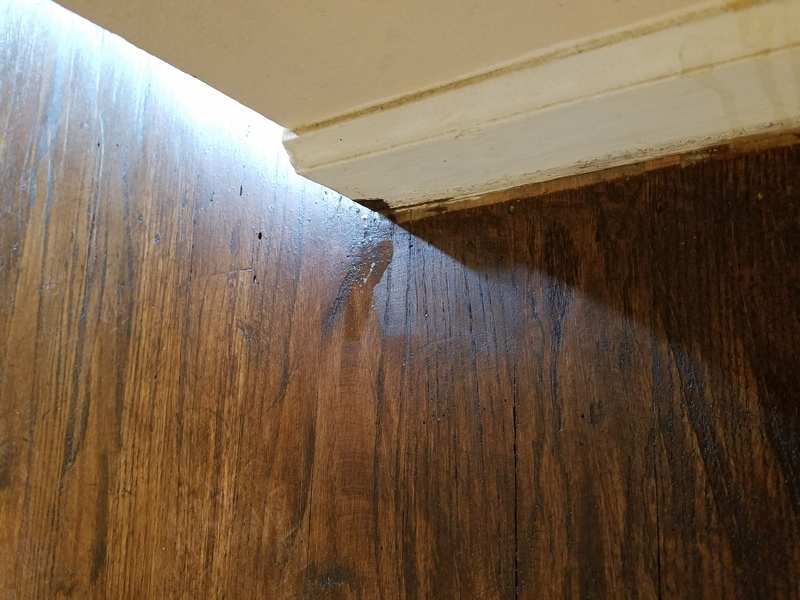 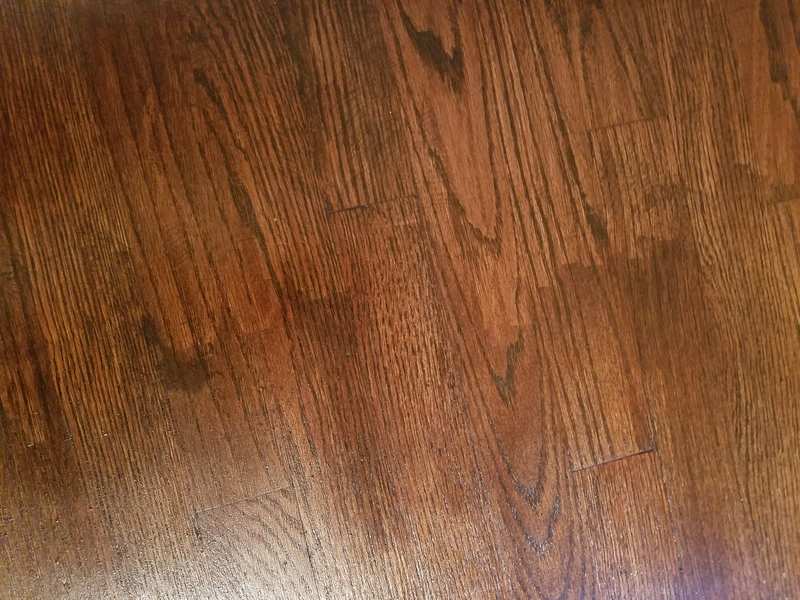 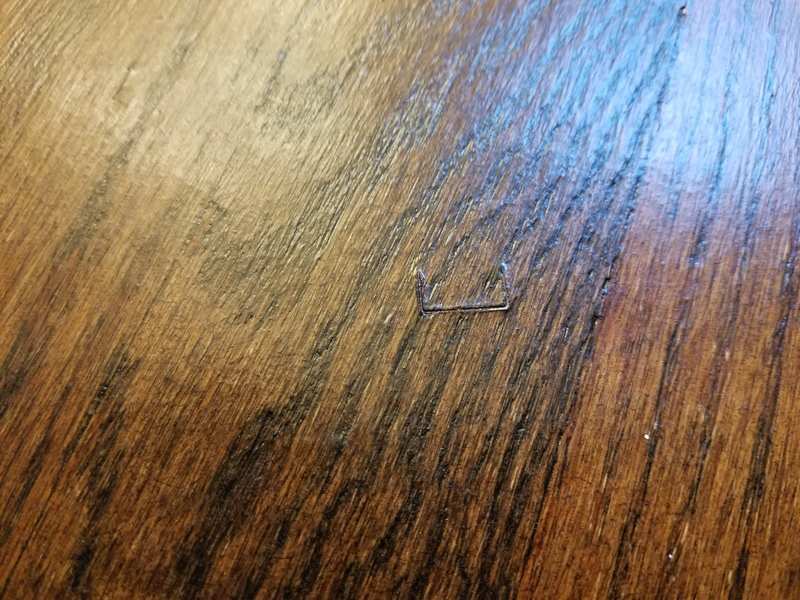 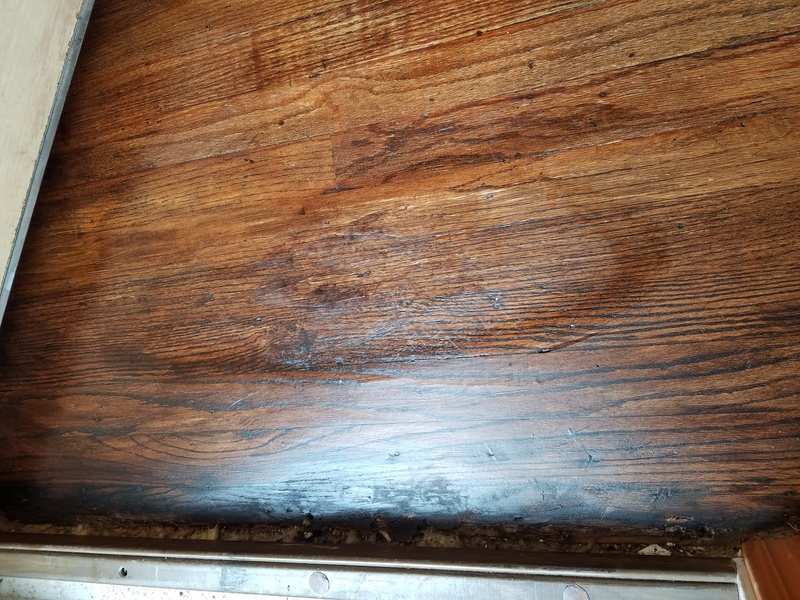 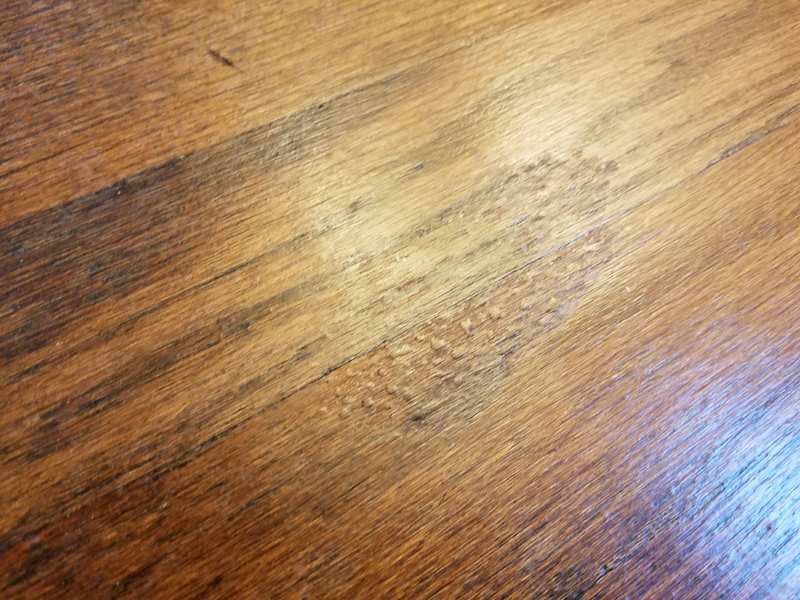 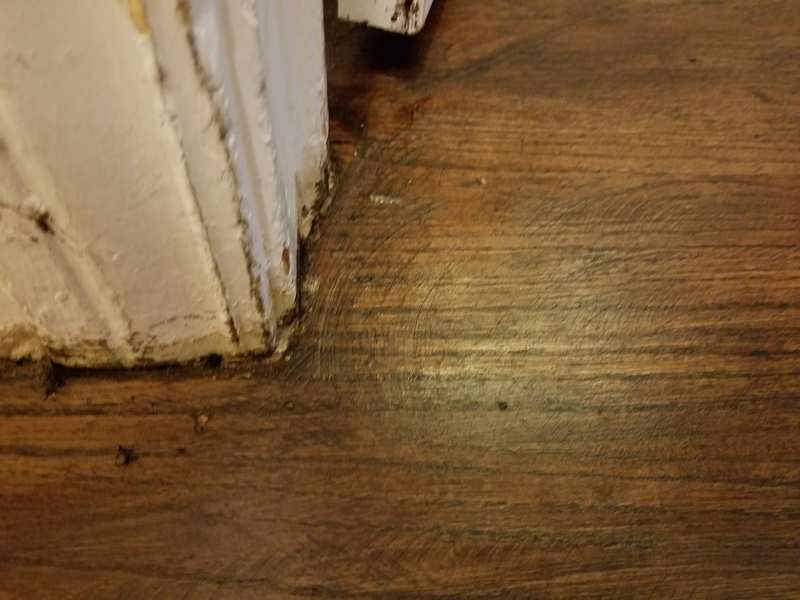 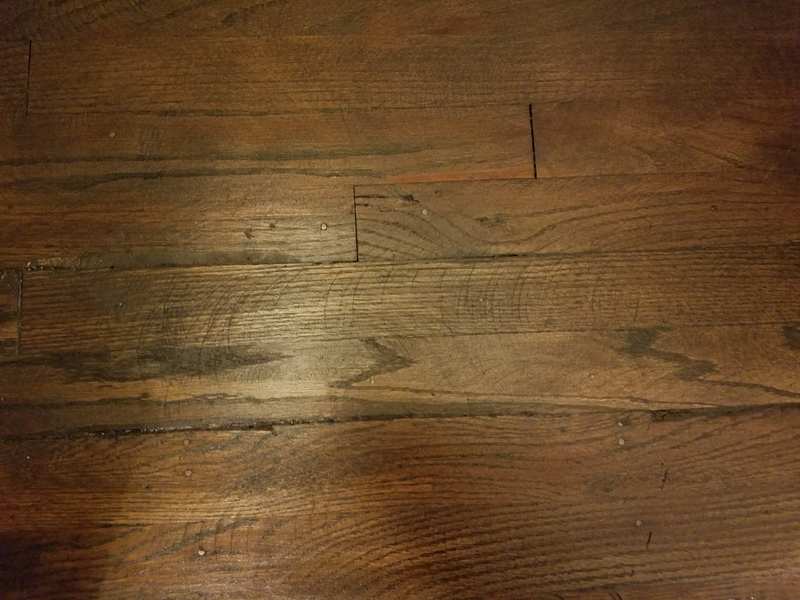 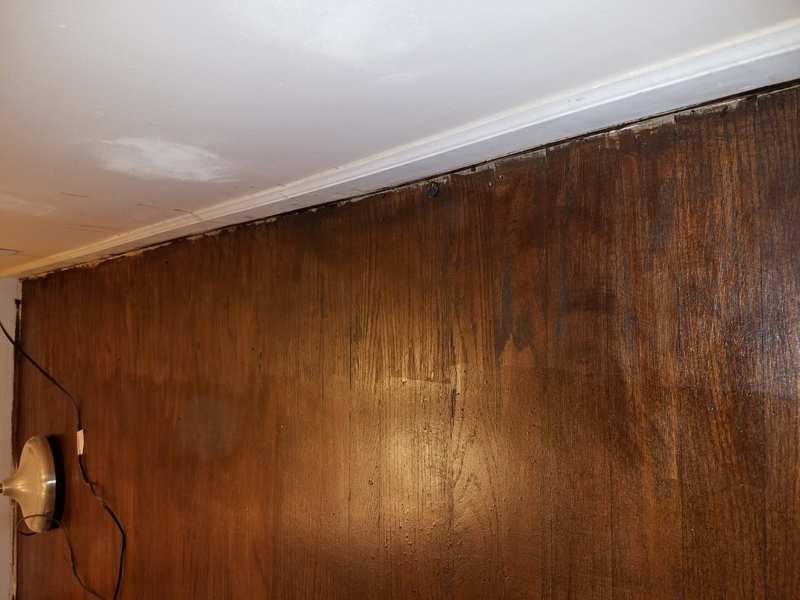 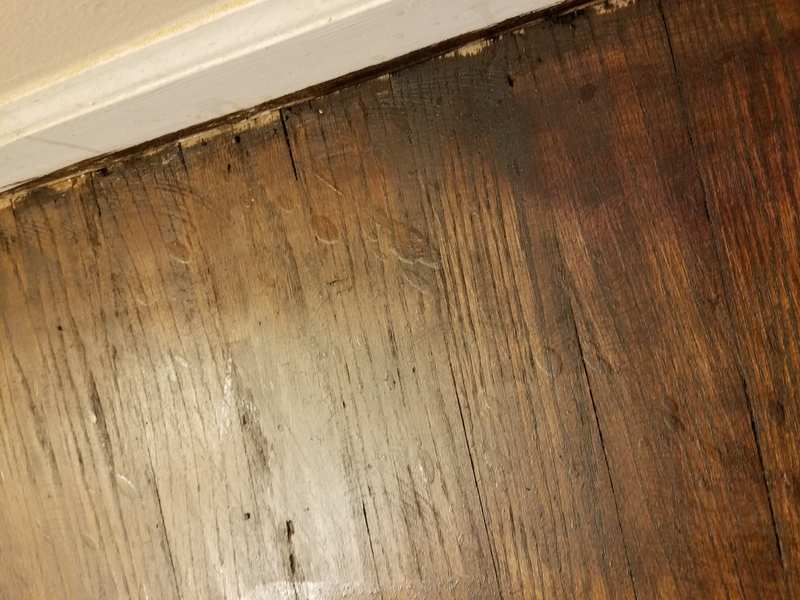 ^^^poly drip marks which were requested to be removed 3 times 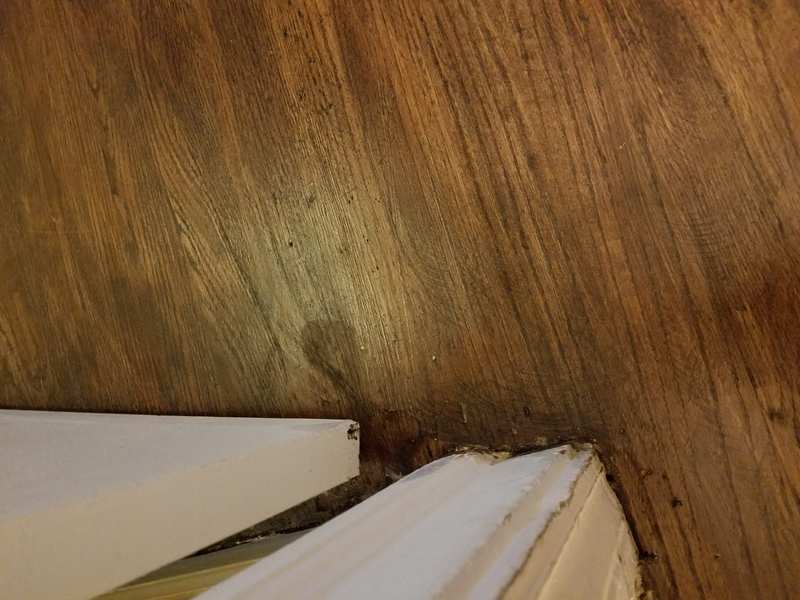 Updated over 3 years ago

Since I posted this, Ralph returned the money he owed me and came back to refinish the floors. They now look much better, and he also agreed they did need to be redone. This has been resolved and Ralph and I are back on good terms

I'm unsure of the amount you paid, but it doesn't matter. You don't approve, so it needs to be fixed. It doesn't look like the prep was done very well (the staple). It also looks like someone inexperienced did the work. Poly/stain is one of the most difficult products to use and achieve a photo finish.

Ouch!  Sorry this happened to you.  You'll be lucky to ever see your money back.

I agree with you - a shoddy job!

I think your contractor is in "broke-contractor" mode. He probably doesn't have the money anymore - he blew it or used it for another job.  This is where contractors get into trouble.  He has to go do another job to pay you back or fund the completion of your project, (in this case - your over payment refund), because he has already spent your money.  It could also be that he is just dishonest.

Hope you can get your money back.  Let us know what happens.

Yeah, that's some rough work. It should be redone to your satisfaction, but good luck. Never complete payment until you are satisfied. If a contractor requests payment in full prior to completion, then like @Ritch Bonisa said, they are in broke mode or are just flat out taking advantage of someone. I took a $6k hit on a roof on my second house, hard lessons learned best.

Call 3 flooring guys and have them bid what needs to be done to get it right, pick the best and move on.

@Steve Balinski Wow, that's some work there alright. Sometimes my guys work rough but I'll own it. Too bad this happened to you, there's only one path for you from here, complain to the state contractors board and hope you have a chance at a contractors bond (if your state requires them), then hire someone else to re-do it. That's all you can do. For your next job, hire better contractors. I have done a 22k painting job and about to finish a 38k job next week, I haven't seen a dime on both, won't get paid until mid sept on both, am not even worried. And, all materials and labor are paid for on both jobs. No deposits, no partial payments, nothing, job done.

Hello Steve.  I would like to speak with you.  Ralph is currently working or should I say not working in my home.  He started May 15- today is July 17 and we do not have one room finished.  He is installing hardwood floors.  I have heard the same excuses as you and we have given him thousands of dollars.  Currently he will not reply to phone calls or texts and he has not shown up for the last two weeks.  He took all of his tools so he has no reason to return.  What do we do?  Get a lawyer?  Can you help me?  patricia