You can buzz that off with a diamond saw on a grinder, you could also trim the portion of the schluter edge off that would normally sit under the tile and just use your colour match caulk to adhere it to the tile edge. Could even use a grout removal tool for a job this small likely. You are going to have some drywall touch up though, I don’t see any way around that. Don’t hire these guys for detail work again.

I'm no help, learned tile from one of the best tile men in the country... when I see stuff like this, just want to tear the entire wall out and slap whoever did it.

@Forrest Williams Rental or flip? Maybe try touching up with wall paint. I see grouted edges all the time and do the same myself...not a flipper though . I don’t care for the metal edging, looks industrial cafeteria to me. There isn’t a lot of bullnose solutions for that edge...go look at model homes. You can sand stray grout off the wall and cut in a straight line with wall paint, make the joint look smaller and straighter with wall paint. You can also probably use a utility knife to straighten the line if the grout is fresh, maybe to dampen it would help. Or maybe a grout knife to sand the edges down. I don’t think it will bother you as much as you think...these are just areas where the painter has already painted but the tile guy is invariably going to need the painter back. Painter is the aesthetics pro. Imo

@Marian Smith actually looks like problem is the cut edge shouldn’t be there but at inside corner. If I cannot avoid cutting the exposed edge I pull off the cut pieces and flip them. He may have had to cover cut glass sharp edges with grout...so yes metal strip would have worked better. The cut tiles add to the unfinished edge look compounding it. 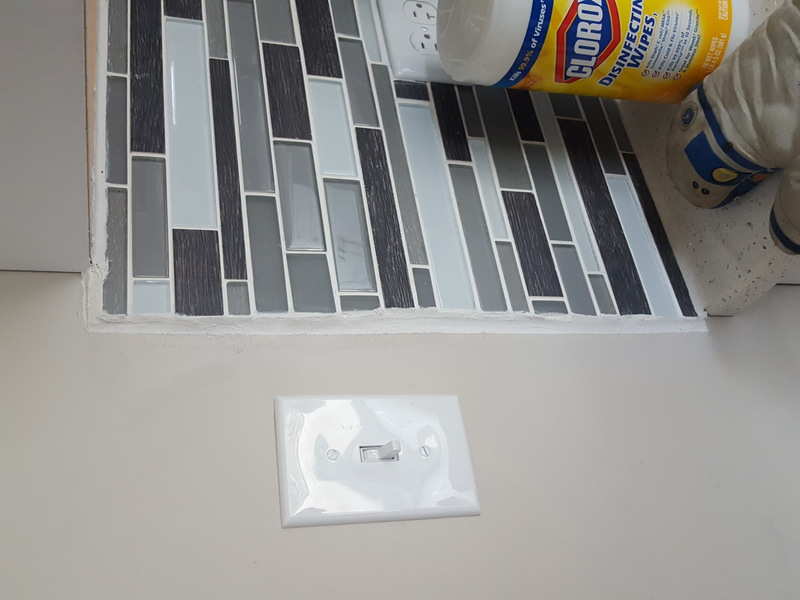 Yea, that looks like hell. Some really good responses from other posters so far.

My first consideration would be what the property is. If it's a rental in anything other than a higher-end locale, I might suggest just leaving it alone. Yea, it's ugly, but it is functional. However, if crap work bugs you like it bugs me well, then you can make it better. How much better depends on how much you are willing to rip out and replace.

So for starters, as you now know, that is not how to edge tile to drywall. Ideally, you would install a finished, not cut, edge of the tile to face the outside edge. That would give a nice sanded factory edge free of a sharp edge. Second, the grout and mortar should be entirely absent from the outer edge - neither belong there at all. Once you have a factory-cut edge without grout or mortar, depending on what it looks like at that point, you can take a very thin bead of painters caulk (use painters tape if you need to) to pretty-up the small void behind the tile and where it meets the drywall (the space created from the mortar). Then use your paint to create a nice edge. If it's not too bad in the first place, you might be able to get away with just a nice paint edge, but it probably will need the caulk. The result will be that edge of the tile is exposed (not covered up with grout or caulk like it is now), and where it meets will be tied together nicely. The other option, which many tile guys will do, is to take a very small amount of grout to fill the small void at the edge, using that in place of caulk, still leaving the factory edge of the tile exposed. There is nothing wrong with that method, until you want to change the paint color and then have bleed from the paint into the grout, which as you know is more difficult to remove - many people would not worry about such things.

Methods to remove the existing grout have been stated already (and yes, you might be able to cover it up with a trim piece). One problem you are going to have with any method is cleaning that grout off the tile edge and any cut tile edges that are sharp or uneven (which makes using a trim piece a decent option). It might be quicker with a better result to pull off all the edge tiles and replace them (do you have extra tile or can you can you get some more?).

One method not discussed is getting behind the grout layer and into the drywall layer with a utility knife. That is probably the easiest however, you will then need to mud the drywall a bit too. Again, that does not solve the issue of the grout on the tile edges (some will not pop off) but, you can get behind the drywall to pull off tiles too if you choose to take it that far. If it were me, I would rip out all the edge tiles and replace them, simply from a momentum and finished result aspect.

Your tile guy should have used a Schluter Strip there. That is a no brainer for that kind of edge. What a hack!

lol these are actually stick-on tiles (i.e., fake). that's awesome that you guys couldn't tell them from the real deal, tho. the only way i knew is that i've purchased the same exact kit for my kitchen! (see below) I would probably cut them to line up with the cabinet instead and add some trim to that part only. the wall will need to be mudded and painted (unless that caulk comes off nice and clean).

Can I get a referral to your tile installer? I want to refer him to all my competitors!

Thanks for the tips everyone, I'm going to reach out to other tile pros in the area. If it's too expensive, I'm going to try the oscilating tool trick a few of you mentioned; then clean up the drywal damage. It is a flip, so I'd like it to look nice.

@Victor S. these are real glass tiles, not the stick on ones.