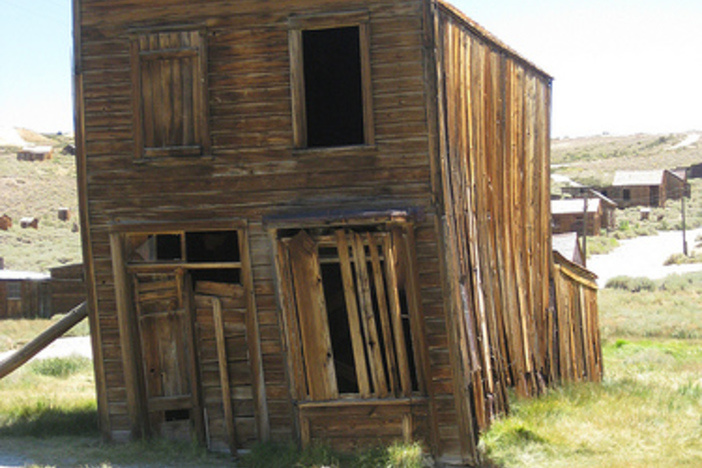 Visitors to Las Vegas and other parts of southern Nevada often take a break from the gaming tables to visit nearby ghost towns. These vestiges of mining booms gone bust are rich in history and folklore. Places like Goldfield, Rhyolite, Calico, and others offer a glimpse into days gone by and while walking among the remnants of towns once teeming with life it’s easy to conjure up images of what once was.

The few scattered buildings left standing despite being beaten down by the harsh desert climate for a century or more are a reminder of those who risked it all for a shot and living the American Dream. Most people have at least some knowledge of the great California gold rush; Nevada and other parts of the desert southwest experienced similar booms with gold, silver, and other precious minerals. Miners would stake their claim and towns would spring up seemingly overnight only to vanish into thin air when the mines played out and the prospectors sought greener pastures.

I am struck by the parallel of the mining boom to the recent housing bubble. Many of those 19th century prospectors were amateurs seeking a better life. They had no experience and packed little more than a pick, a shovel and a dream. They swarmed over the west and created a boom that changed the course of history. The modern day prospectors sought out real estate riches and untold wealth armed only with books touting the virtues of buying with nothing down and packing the promises of gurus who sold them the “secrets” they desperately wanted to believe. Like the dreamers of days gone by, many of those who entered the boom in the early stages did well. Those that came later or refused to cash in their profits suffered the consequences of a boom gone bust.

Those old mining camps litter the western landscape with relics of once vibrant towns. The people moved on a century or more ago and only a few scattered buildings remain. The harsh desert environment will eventually claim those that are not protected by some historical society and one day there will be no sign that they ever existed at all.  The modern day prospectors have left ghost towns of a different kind.

The southern Nevada city of Las Vegas now has ghost towns of its own made up of residential homes, condominiums, and high-rises. Builders were all too eager to build housing tract after housing tract to sell to the neophytes and   wanna-be tycoons. Many of these projects are looking like those ghost towns of a different era. Once vibrant communities are now littered with bank-owned properties sporting dead landscaping and swimming pools gone green with algae.  The housing boom turned into a foreclosure wave as homeowners lost their homes to the banks because of job loss, hardship, or simply because they walked away.

Investors are once again coming into the marketplace lured by what they perceive as bargains. A prudent investor needs to look beyond the numbers. The bottom line is important for sure, but it is not a sufficient measure of a deal’s worthiness. While a house swimming in a sea of foreclosures may seem attractive based on price, it may be a poor deal in the long-term. Before investing in one of these ghost towns, be sure that you are clear about what your goals are and that you have thought through your exit strategies. A bargain doesn’t seem like such a good deal if you are stuck holding it far longer than you had initially planned.

Robert W.
Las Vegas is an amazing place. It is so far out there on the extreme scale with bright lights, incredible stage shows, and unbelievable hotels & resort. Then a few short miles you have these old broken down ghost towns from the past. Polar opposite extremes. Maybe one day, we’ll see a new Vegas resort that uses an old silver mining ghost town as a theme?

John Roberts
After reading this post, I’m thinking about a place somewhere in the Nevada desert where people are slowly developing lots for residential purposes. And sometimes new concepts bring in more people than anticipated. It would be nice to know the home sales in that specific area boom sometime in the future.