When I evaluate real estate, whether it’s a market, a deal, or the broader economy, I try to pick a few key variables to examine. These variables can be almost anything: job growth, population growth, the school system, proximity to a great deli, building permits, and so on.

The problem is that if you pick too many variables, you can get stuck in analysis paralysis. Pick too few, and your analysis is overly simplistic. It’s important to use variables that are simple to measure, easy to understand, and able to answer your questions.

For me, I have some favorites: interest rates, housing affordability, and population growth, to name a few.

But today we’re going to talk about another variable: income growth. It may seem like an obvious metric, but we’re going to do a deep dive and learn exactly what this metric can tell us and what it cannot.

And best of all, this concept is super easy to apply to your own real estate investing. Yes, there will be charts! There will be math! There will be a lot of good old common sense! But all of that is just to show you why income growth is a useful variable. From there, using it in your own investing is simple.

What is income growth?

Income can be measured in a few ways, but for the purposes of this study, we are going to use census data (more specifically for those who will ask me later, the American Communities Survey [ACS] from 2010 and 2019).

What the ACS shows is the median household income, which for the remainder of this article I’m just going to call “income” since it’s shorter and I don’t get paid by the word.

Simple! So this passes my first two criteria for a good metric–simple to measure and easy to understand.

What does income growth tell us?

There are all sorts of ways to measure whether a variable helps us answer the question at hand. One of the simplest and most reliable ways is to plot the variables in a chart.

The questions I was asking when I undertook this project were:

So I plotted it out. On the vertical axis, we have rent growth (I used BPInsights data and calculated the CAGR from 2010-2019). On the horizontal axis, we have income growth.

What we see here is pretty self-explanatory: When income growth goes up (to the right), rent tends to go up too! Hurray! 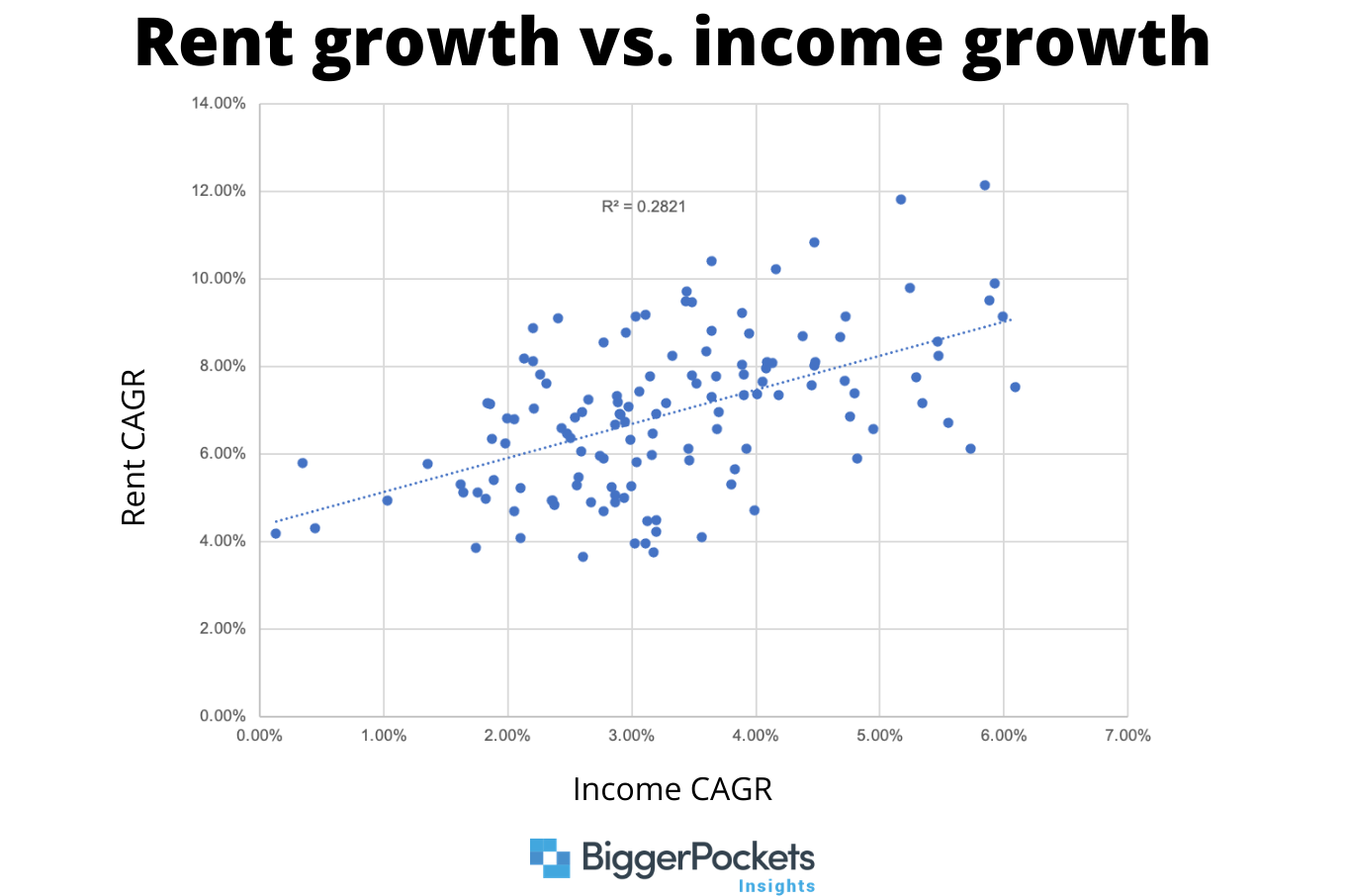 To further measure the interplay between these two metrics, I added a trendline to the graph, and even displayed the R2 number (coefficient of determination). The math behind all this can get complicated, but here’s what’s important to know: the R2 essentially indicates what percentage of the change in Rent CAGR is explained by the change in Income CAGR. For this, the answer is about 28%.

Think about that—we can explain about 28% of the change in rent growth from 2010-2019 by looking at a single variable! If you’re new to this kind of analysis, you’re probably thinking, “28% is for chumps, give me more!” but trust me, this is great. Think of how many possible variables contribute to how rent grows over time, and in just this one metric we can explain 28%.

I also plotted something similar for home prices: 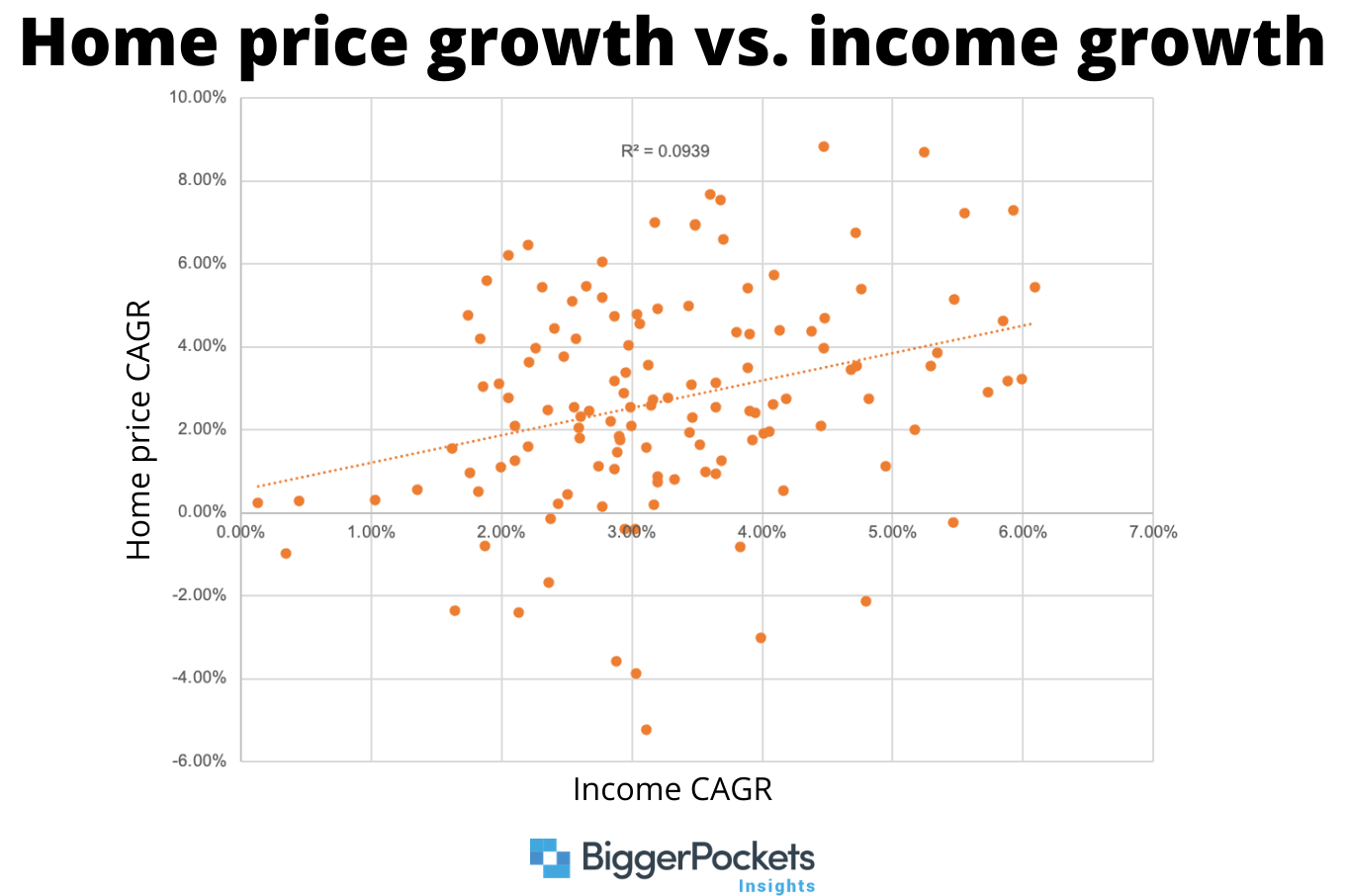 As you’ll see, in this graph, the dots are a lot more spread out, which we don’t like because it generally means we’ll learn less. The numbers bear that out, with our R2 coming in at about 9%. That’s not as good as rent, but it’s still pretty good. Again, think about how many crazy factors contribute to whether a house appreciates or not, and with this one factor we can explain 9% of appreciation.

So, this passes my last criteria: Does the metric actually answer the question at hand. In this case, yes!

Since all the data we’ve looked at so far is historical, the question is, how can we forecast where income growth is likely to occur? Here are a few things I like to look at:

Another thing about income growth is to look at the rent-to-income (RTI) ratio. I’ve written about this in the past, so you can check out that article here, but here are the basics.

RTI measures what percentage of a renter’s income goes towards their housing. Generally, anything under 30% is considered “affordable” and anything above is considered “unaffordable.” Personally, when RTI gets above 30% I think the prospect of rent appreciation goes down considerably—as it should, people shouldn’t be spending more than that on rent.

I hope I’ve now convinced you to use income growth as one of the tools in your toolkit when evaluating where and when to invest in real estate. If you want to get a head start on looking at some markets, here are the top 20 markets for income growth between 2010-2019. There are some obvious ones here (San Francisco, Seattle), but some other less-known markets that have strong cash flow potential.

In addition to the metrics we discussed above (income, rent, appreciation CAGR), I also threw in the rent-to-price (RTP) ratios for these markets as well. I did this because my initial bias was that these cities were all going to be super expensive and therefore wouldn’t have strong cash flow prospects. That is not the case, however.

Remember that RTP is a good proxy for cash flow, and anything above .5% is considered good. So while cities like Seattle, San Francisco, Denver, and Washington D.C. don’t offer the best cash flow prospects there are some gems on this list. Take a look at Cape Coral, Florida, and Reading, Pennsylvania, for example!

And don’t get discouraged if you live in or near some of those bigger cities. Oftentimes the income growth extends beyond the city boundaries and helps raise rent and home prices in the adjacent suburbs and towns–so check those out!