BiggerPockets Publishing recently released my fourth book, Recession-Proof Real Estate Investing. My goal in writing the book was to teach investors how the economy works, how economic cycles work, and how to use this information to modify investing strategies and tactics to ensure they maintain profits and minimize risk under any economic condition—not just during recessions.

That said, these days, there’s a lot of discussion about when the next recession is going to hit and how we can prepare for it. Those are big questions!

I can’t address all of it here, which is why I wrote the book. But I can highlight a particularly important aspect of economic forecasting, one that can be used to help predict how close—or far—we may be from the next economic downturn.

There are three methods of forecasting that can be used to better understand where we are in the economic cycle and how close we may be to a significant economic shift:

I’m a numbers guy, so to me, economic data is by far the most interesting. There are dozens of pieces of data that can be used to assess when an economic shift might occur.

But one, specifically, has proven to be the most reliable over the past 60+ years. It’s called the yield curve.

What is the Yield Curve?

The yield curve represents the change in interest rates for government bonds of different expiration dates. To make sense of what this means, it’s important to understand two facts:

When you buy bonds that expire quickly, expect that you’ll generally get a lower return than if you bought a similar bond with a much longer expiration date. This is because being a long-term bondholder is considered an opportunity cost for an investor. They’re sacrificing using that money for potentially better investments for the duration of the bond.

What Does the Yield Curve Look Like When the Economy is Healthy?

In a healthy economy, there’s a vast difference in the return of short-term bonds versus the return of long-term bonds. On any given day, if you were to plot different expiration dates along with the amount of interest each pays, your graph would start low to the left and end high to the right.

For example, here’s data from January 2004, during a time of strong and vibrant economic expansion: 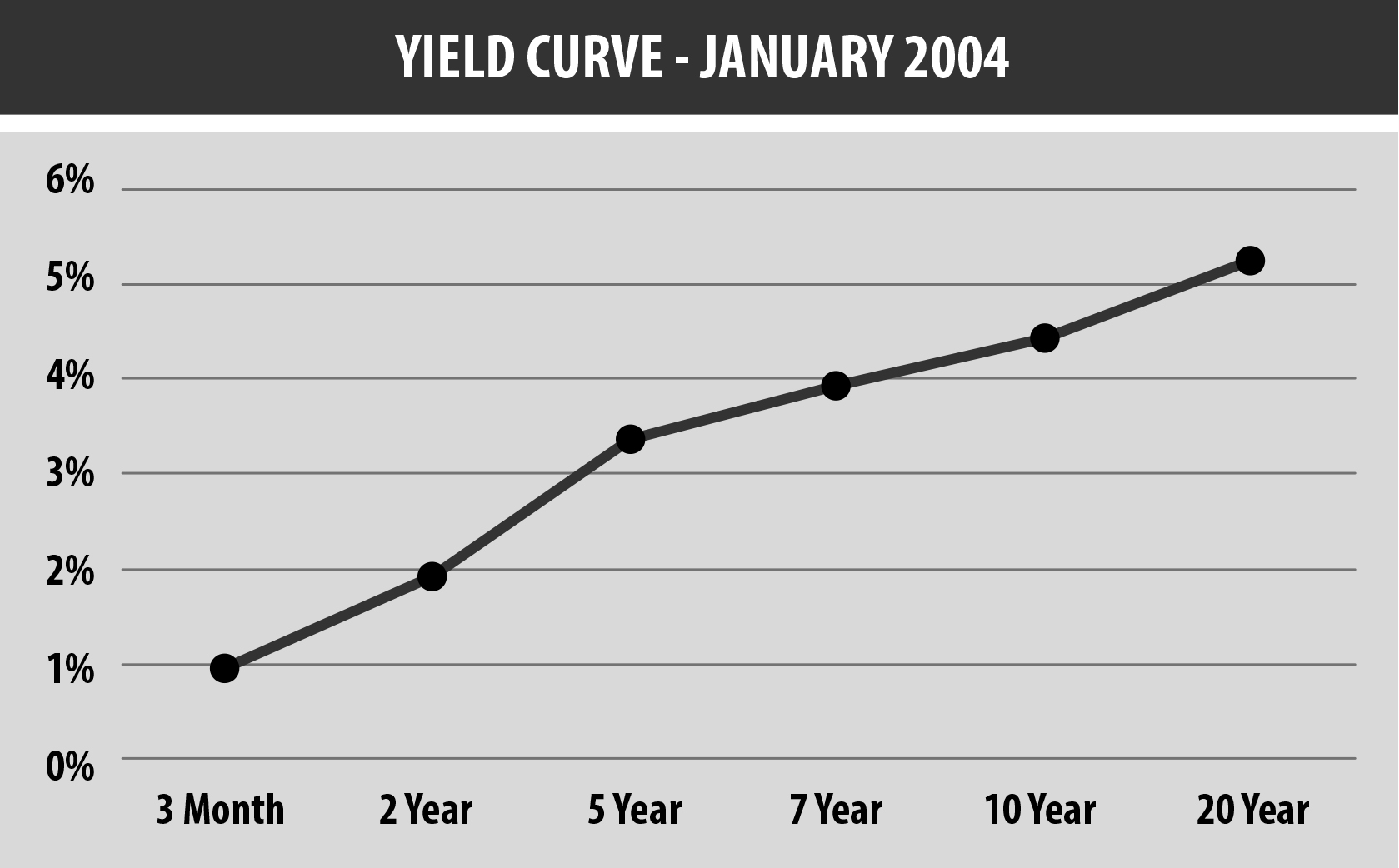 The plotted points indicating the bond expiration dates and their associated interest rates is the yield curve. (“Yield” is just another term for interest, especially when referring to the returns that bonds pay.) Bond yields change daily, so the yield curve changes each day, too.

The curve above makes sense. For those people who are willing to invest their money for longer periods of time, the government provides higher returns.

But the government doesn’t actually control the returns on these bonds. It’s simply a matter of supply and demand.

Yep, you read that right. For in-demand bonds, people are willing to accept lower returns. The opposite is true when there is less demand.

As investors grow wary about the economy, they start to move money out of other investments and into long-term bonds for longer-term security. They don’t want their money in real estate or the stock market, because they are concerned about where the values are heading. In contrast, government bonds seem safe and promise a fixed return.

This is what the yield curve looked like in March 2006, about 18 months before the Great Recession started: 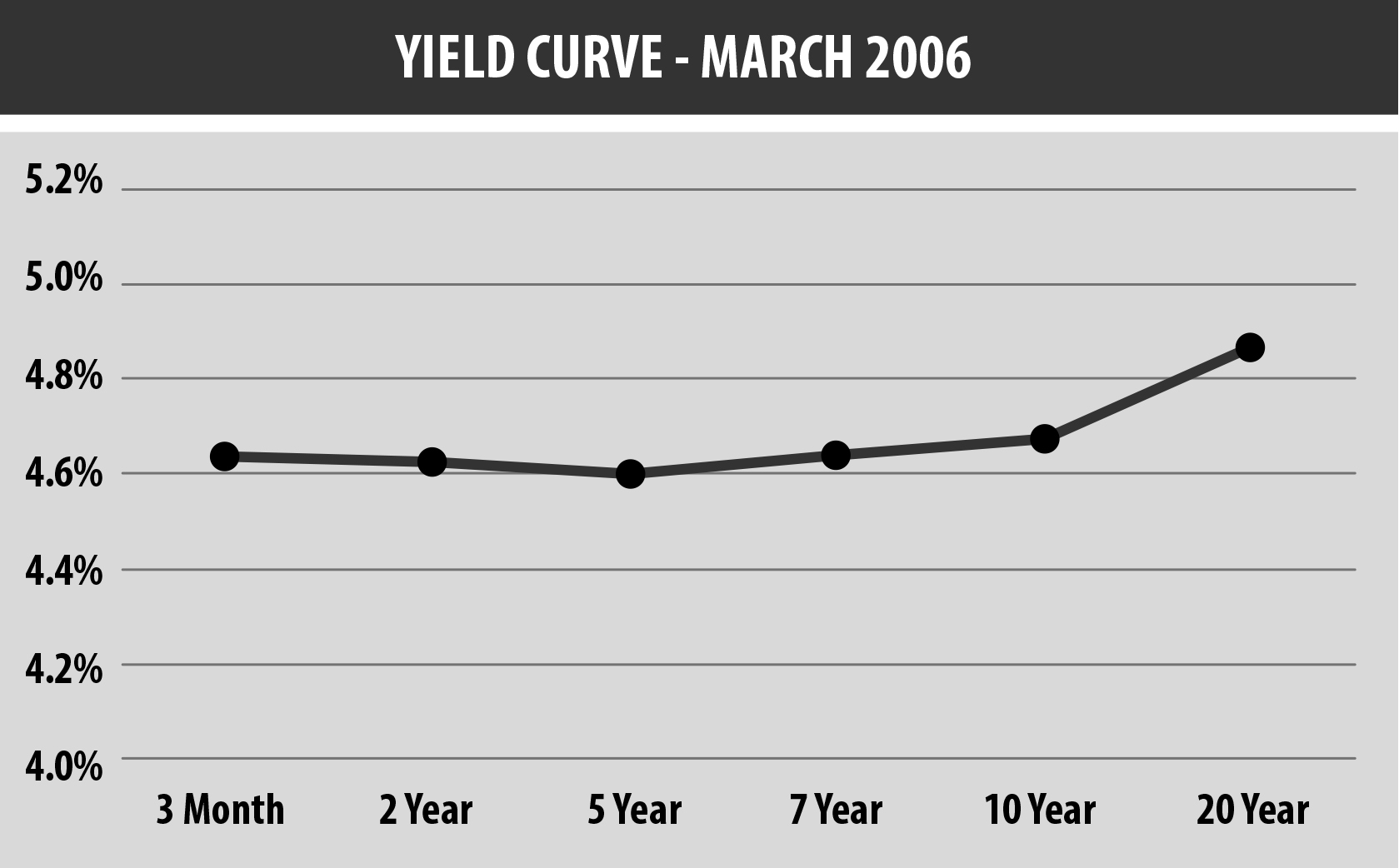 It turns out that the yield curve is one of the best predictors of an impending recession. Right before one hits, it typically transitions from flat to inverted, meaning the the left and right ends of the curve will be higher than the middle.

Here’s what the yield curve looked like just a few months later in August 2006, about a year before the Great Recession began: 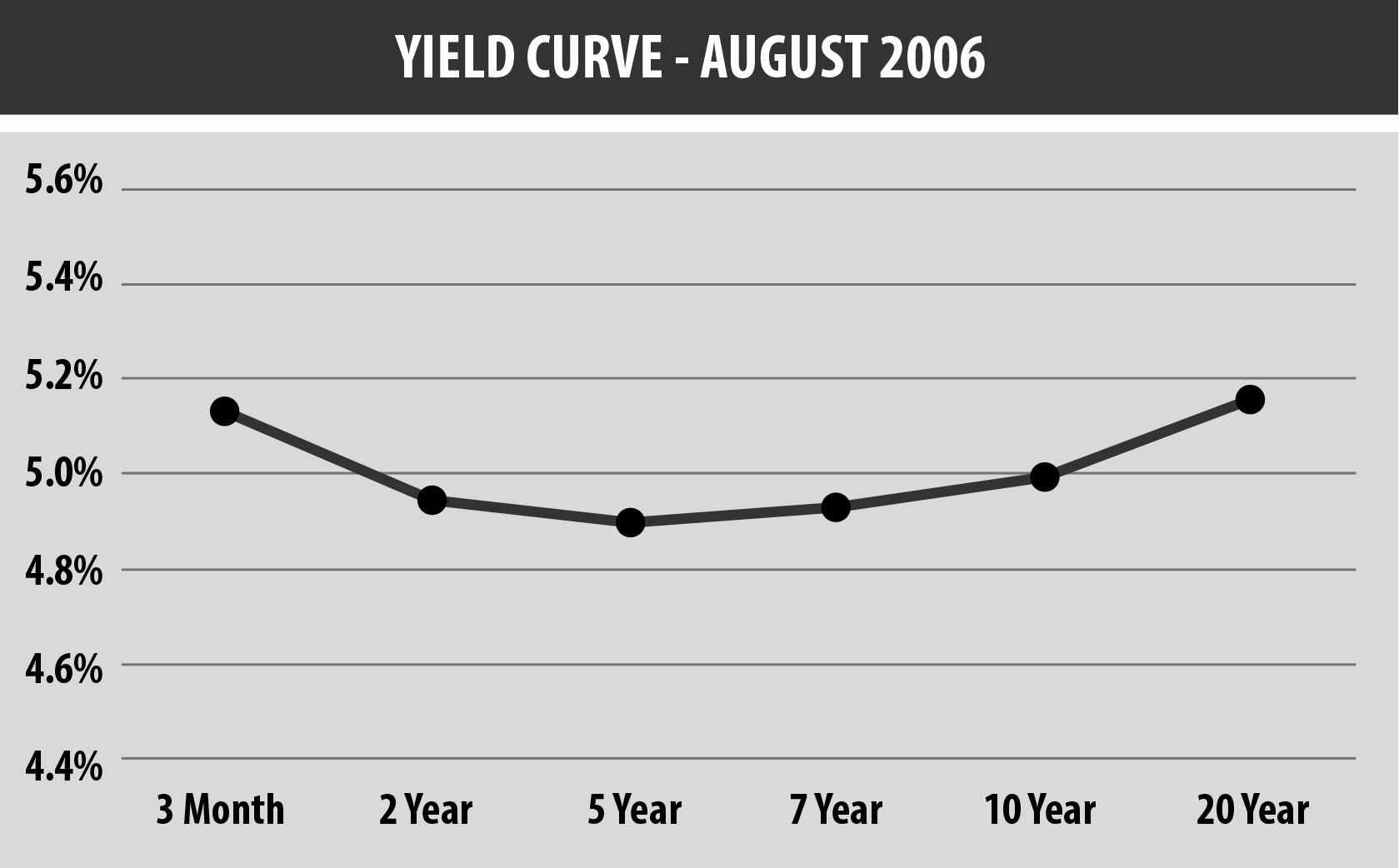 With only two exceptions since 1959, any time the yield curve has inverted, a recession has followed. The inversion typically occurs between six and 18 months before the downturn becomes evident.

So, where are we today with respect to the yield curve? More on that and what it portends for the future of the market next time!

Prepare yourself to take any recession in stride! After reading this e-book, you will never be intimidated by a market shift—and you’ll never look at your real estate business the same way again. Pick up your copy today!

Does this make sense? Do you have any questions?