From buzzy restaurants and tightly packed bars to live concerts and giant sporting events, nearly every attraction that makes big city living worth the sizable rent has been basically nonexistent since COVID-19 shut down in-person gatherings.

In notoriously expensive cities like New York City, Los Angeles, and San Francisco, where one-bedroom apartments were going for more than $3,500 a month in some neighborhoods before the pandemic struck, many of the young professionals who were paying so much to live close to the office have taken the term “remote work” literally, packing up for faraway destinations in the Sun Belt or even just the nearby ‘burbs.

In 37 of the largest 100 counties in the United States, rents for one-bedroom apartments were falling year-over-year, according to a recent Realtor.com report.

“Because employers are doing their part to stop the spread of COVID-19, many white-collar workers, who tend to be concentrated in major urban areas, have the flexibility to work remotely,” says Danielle Hale, chief economist for Realtor.com. “This means that one of the major factors (being close to your job) that attracts dwellers to dense downtowns is no longer relevant.”

Then add into the overall housing equation record low mortgage rates and fewer expenses for many of the folks working from home, and many of the urban renters who have chosen to stay put have decided to pour their monthly housing costs into buying a home. According to Zillow data, while rent prices fell in many metros, home values increased in all of the 100 largest cities in the United States.

From infamously pricey big cities to tech hubs and major tourism centers, here’s where rents have dropped the most since the start of the novel coronavirus pandemic. 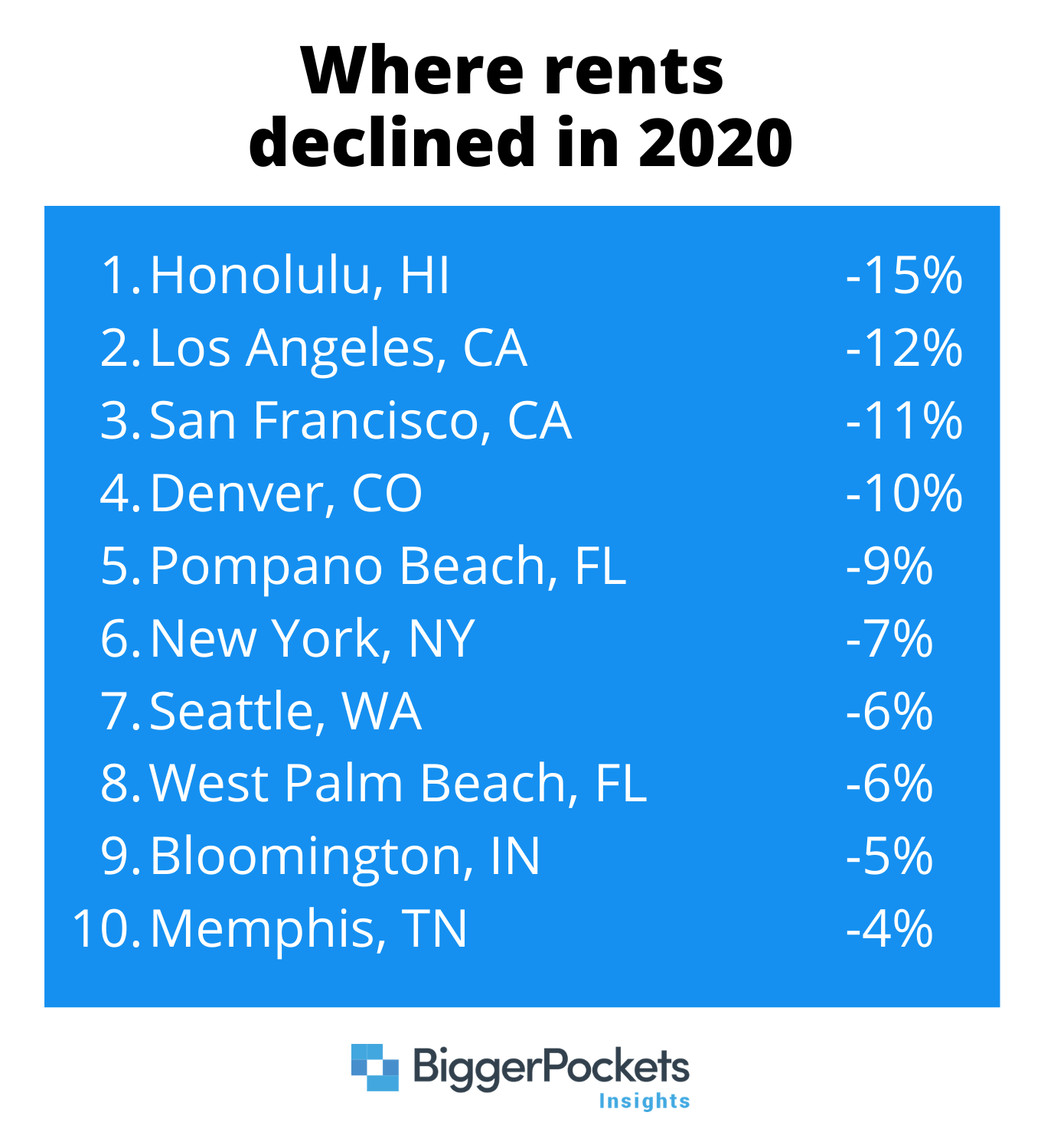 There have been hundreds of stories about the mass exodus from New York City since COVID-19 swept through—and devastated—the five boroughs last spring. In those early days of lockdown, Manhattan lost somewhere around 170,000 residents to nearby suburbs like Westchester and New Jersey, as well as second homes in the Hamptons or Catskills. According to BiggerPockets data, rents in New York City have declined 7% year-over-year.

“One of the key reasons is because renters were less anchored to their location—in other words, more mobile—they simply left if they couldn’t get a better deal,” says Jonathan Miller of Miller Samuel Real Estate Appraisers & Consultants. “Most of the metrics that cover the rental market have been showing a severe adverse impact. Vacancy rate has tripled; the market share of rentals that have some concessions with them has hit record highs; the amount of concessions in the context of monthly rent has also hit record levels.”

On the other side of the country, Los Angeles is in a similar boat, with rents declining 12% year-over-year according to our stats. While buyers who have the funds and want to take advantage of low interest rates are buying up houses in the city and surrounding towns, leading to a surge in home prices, those who aren’t ready or are unable to make the jump into homeownership are moving to larger rentals to work from home in more affordable suburbs farther from the coast in places like the Inland Empire.

In nearby Riverside County, rent for vacant units actually increased by 6.9% between January and October, according to Apartment List data, and in San Bernardino County, rent jumped up by an impressive 9.1%.

The same goes for California’s other major city, the techie hub of San Francisco. As many of the hoodie-clad workers have become untethered from their corporate headquarters, the Golden City has experienced a huge drop in rental prices and a giant increase in vacancies. Year-over-year, rents are down 11% according to BiggerPockets’ numbers.

Hale told Bloomberg in December that tech companies, “have been among the most flexible with allowing people to work remotely and a lot of workers are taking advantage of that,” which has been a big contributing factor to the steep declines in SF rental prices. However, she and many other economists do expect rents to recover eventually, depending on when workers do return to the office.

While San Francisco may be the techie mothership, it is far from the only tech hub to see rents drop due to remote work. Seattle—home to Amazon, Microsoft, and more—is also experiencing a decline in rental prices. According to BiggerPockets data, year-over-year rents have gone down 8%. In fact, Zillow experts claim nearly half of all rental listings are offering some sort of concession on parking or rent.

And Denver, which has earned itself the nickname “Silicone Mountain” due to its increasing number of tech startups, is experiencing a similar phenomenon to other expensive cities with a large share of employees working from home. Rents are down 10% in the city itself, while nearby cities that are less expensive, including Aurora and Colorado Springs, have experienced rent increases.

Well before the pandemic shut down restaurants, theaters, and every other activity that doesn’t include six feet of personal space, rents in Honolulu and larger Oahu had already been sliding. More than 3,000 new units had come onto the market in the past three years alone, which led to less demand and lower monthly rents for landlords.

Then came COVID-19. A long, mandatory quarantine dissuaded short-term visitors from coming in, prompting many local hospitality workers, who were furloughed or laid off, to leave town. Even more apartments went vacant, adding to the oversupply. In the past year, rents have slid another 15%.

On the flip side, with Northerners fleeing winter—and the lack of outdoor entertainment—rents and home prices have been skyrocketing across Florida. St. Petersburg is up substantially and so are many other cities. But according to BiggerPockets’ data, suburban Pompano Beach and West Palm Beach have experienced a decline in monthly rental fees, which are down 9% and 6% respectively.

Memphis, Tennessee, has been hit by a couple of factors. Normally, the city known as the “Home of the Blues & Birthplace of Rock ‘n’ Roll” attracts music lovers from all over the world. In 2019, the city had 12.4 million visitors, over three-quarters of whom came to pay their respects to the city’s music legends including Elvis, B.B. King, and Johnny Cash; experience live music on Beale Street; and get a taste of the city’s famous ribs. Obviously, COVID-19 hit the tourism industry hard, leading to furloughs, layoffs, and many struggling workers combining households.

But Memphis also has another factor that led to a decline in rents, which are down 4% through 2020: a lack of college students. With 34 colleges and universities within 50 miles of downtown, the area normally boasts 52,748 students per year. Right near the heart of the city center, University of Memphis’ 21,000+ students were not coming in for face-to-face or hybrid classes until February 1, creating even lower demand for rentals.

Bloomington, Indiana, is in a similar boat. The city is home to highly respected Indiana University and its groundbreaking sex research center, the Kinsey Institute. Nearly half of its 85,000 residents are students. Though rents have decreased 5%, home values have ticked up 3.7% year-over-year.

When looking at where rents decreased, there are some clear trends. Big-city living, for example, appears to be on its way out—at least until the world recovers from COVID-19. Will rents in these cities keep dropping, or will they slowly recover as the United States reopens?

Investors should keep a close eye on these towns. They may offer great opportunities for rent growth in the future—or be ideal cities to temporarily avoid.

Dave Meyer is a real estate investor and the VP of Data & Analytics at BiggerPockets. Follow him @thedatadeli.

New Redfin Report Shows Which Housing Markets Are Gaining—And Losing
NAR Economist Thinks Housing Prices Could Rise In 2023—Is That Possible?
These Housing Markets Will Be The Most Resilient During The Correction