Our MHP is located in Maine. Water is submetered, but a tenant in the throes of eviction had a pipe burst, didn't do anything about it and now I'm on the hook for a hefty water bill.

Since we're in Maine, freezing pipes is a big concern. Does anyone know of any auto water shutoff valve or similar way to monitor for freezing pipes?  (It's a BIG water bill.)

Saw this in a recent trade magazine but have no experience with it. Costly but probably cheaper than your water bill and clean up costs. Some of them are WiFi enabled so I'm not sure how that fits in with your situation.

The idea of running a little water to keep things from freezing in the cold is common.

It seems that practice was a contributing factor in this mess:

I'd look into a thermostatically controlled heat tape system on all the under trailer supply lines, along with insulating the lines.

You would really be looking for something closer to this:

Most of the automatic valves out there work off of sensing standing water somewhere, which isn't going to do any good if the line breaks someplace you can't leave a sensor. This device monitors usage, so it would (should) recognize the large spike in consumption that a main break would create.

@JD Martin I like this one too. Probably a better option for the reasons you stated.

There are several types.  One has a sensor on the floor which will send a signal to an electronically activated shut off valve when it gets wet.

Best use for that type would be to shut down water main in front of sub meters (assuming you don't need constant supply of water for steam boiler-type heating systems).

Then you would get calls from other tenants about no running water, send maintenance, and get problem resolved.

Here in NEPA, it can get chilly too.  We often opt for insulation, sealing all cracks/drafts, rotating/circulating fan, and thermostatically controlled space heater (all on house meter).

It would need to be a flow indicator type - the moisture sensor version would be useless in this application as @JD Martin pointed out.

Has anyone ever used them on a water system equivalent to that found in a 50 lot park? I'm not sure installing one on every home would be worth the cost but I don't believe we could just install one on the main line for the whole park and have it function as desired either. I've heard of pressure loss issues and false shutdowns, if it would even work at all.

How about isolating groups of homes and installing one of these shut off valves for every 6 or 8 homes on the same line? Anybody here ever tried that?

And in the case that Mindy is referencing here - all the heat tape and insulation in the world doesn't help when the tenant skips town and shuts the heat and power off...


It would need to be a flow indicator type - the moisture sensor version would be useless in this application as @JD Martin pointed out.

Has anyone ever used them on a water system equivalent to that found in a 50 lot park? I'm not sure installing one on every home would be worth the cost but I don't believe we could just install one on the main line for the whole park and have it function as desired either. I've heard of pressure loss issues and false shutdowns, if it would even work at all.

How about isolating groups of homes and installing one of these shut off valves for every 6 or 8 homes on the same line? Anybody here ever tried that?

And in the case that Mindy is referencing here - all the heat tape and insulation in the world doesn't help when the tenant skips town and shuts the heat and power off...

The more homes on the line, the more difficulty the device will have in identifying water use that's beyond normal. In the water industry we have equipment available to use that serves to identify leaks on mains, which is kind of what you're aiming for, but it's nowhere near cost effective for your application here. More cost effective, if someone time consuming, would be to change the most vulnerable pipe to high pressure PEX; I've seen demonstrations of PEX expanded absurdly beyond its size, with pressure and temperature, before busting. In fact, I watched a guy once bend a pipe 100 times until it had a crease in it like you'd find in a paperback, then use a torch to heat it back to normal. None of the earlier poly pipe, and certainly not CPVC/PVC, copper or galvanized is going to absorb anything like that.

@JD Martin I'm definitely a big fan of PEX and am always happy when I inspect a home and find that it has already been replumbed with it. Any new plumbing we do is always PEX. While obviously much more forgiving than any other material when frozen the weak point then becomes the fixtures themselves, or, in the case of anything with hot water baseboard, the baseboards are always still copper and will split quickly once they freeze.

When cold enough I've seen interior pipes split within a matter of a couple hours of a heating system failure.

I'm veering a little off track now but when you live in a climate that sustains -20F for weeks on end you get pretty well versed in the freeze threshold of a lot of different materials.

This toilet took longer than a couple hours to finally give up but it's pretty good example of the kind of damage that can result. I found this in a foreclosure a couple years ago and it's a common sight. Now picture water gushing out of that toilet, unrestricted, until someone notices a frozen river creeping down the street. 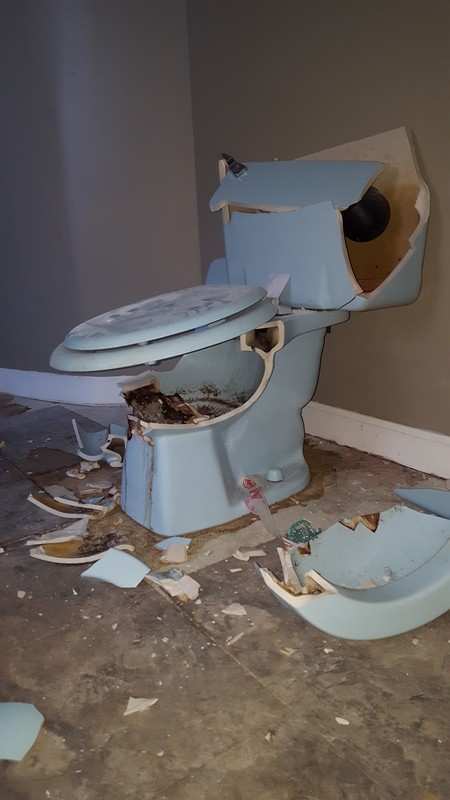 @Ryan Murdock Yes, that's a problem you northern guys deal with way more than us. Although I have my own frozen story - back almost 20 years ago I moved out of state for a couple of years for a job. The first winter, I had my house on the market and the realtor insisted on keeping the water on for showing clients, and said he'd make sure the heat stayed on. Nope. A vent pipe came loose on the furnace, which wouldn't allow it to fire. We got a record one week cold spell, and when the water guys came out to read the meter they saw mine flying. They turned off the water and called me; I got in my car and drove 8 hours back to the house, to find a glacier a foot thick and 5 feet wide, and the height of my house (two story on that side) attached to the brick. Every pipe inside the house (cpvc) had frozen and busted and run a million gallons of water through the finished basement. Needless to say, it was an insurance claim. The clean up crew brought in these massive dehumidifiers and fans; I slept in the house that night and it was like sleeping inside a tornado. The electric bill for running the cleanup stuff for a week was over $1,000.

The best you could hope for in a situation like what you described above would be for the main line to freeze so as to create a block in the pipe. A frozen slug in a pipe can hold back an amazing amount of water - but your baseboard stuff, yeah that would be toast for sure!

@Mindy Jensen is it a main water line that you get billed for, then submetered out so you charge the tenants? If they are your sub meters, I am wondering if you could use software to read them daily and alert you to usage above a certain threshold. I am assuming you are adding the water bill to the monetary rewards that you are seeking during the eviction? Not that you will ever see a penny but at least get the judgement and try to collect it if you can.

As others have suggested, make sure the pipes all have heating cable on them. Mobile homes are especially prone to frozen pipes due to exposed pipes under the mobile home and very poor insulation. Of course heating cable only works if you have electricity, so you need to make sure that stays on too.

Good luck! How is the MHP going other than this road bump?

I'm a plumber who works in maintence. What Marc Winter said is accurate. I would just add that there are some that will also send an alarm to your smart phone.

They would need to be tested periodically. Often what happens is people install back up systems/ safety systems and don't maintain them. Then when you need them they don't work.

There are also low temp alarms that can alert if, lets say, a basement gets under 50 degrees. This might help, but freezing pipes can happen in unexpected areas.

The properties I manage are protected by a "Water Cop"

There are sensors tied to a security system, which when they detect water, shut off water wherever the water cop is. You can have it on the Main, or anywhere downline. It's how you set up the alarm system that tells it how to notify you (dispatch/personal phone/ subscription center etc)

I have used this ( https://www.lowes.com/pd/LeakSmart-Brass-3-4-in-Co... ) with the Iris system, not only does it shut off, but I also get a notification on my phone, which I find incredibly useful.

lets all invent a device and patent it. i propose we call it tenant wrecking water flow control terminator device or t-wrexs for short.

Similar to @JD Martin  I would look at it from the usage view point. One of the condo associations I am involved in uses http://watersignal.com and I would highly recommend it. It works great and has already paid for it self as we have been able to find leaks quickly.

@Mindy Jensen , you mentioned that your water is submetered already. I would look into digital meters with a service like Conservice or PayLease. That way you can get realtime updates and alerts for irregular usage. Plus, if you use RentManager, the readings can feed directly into the software.