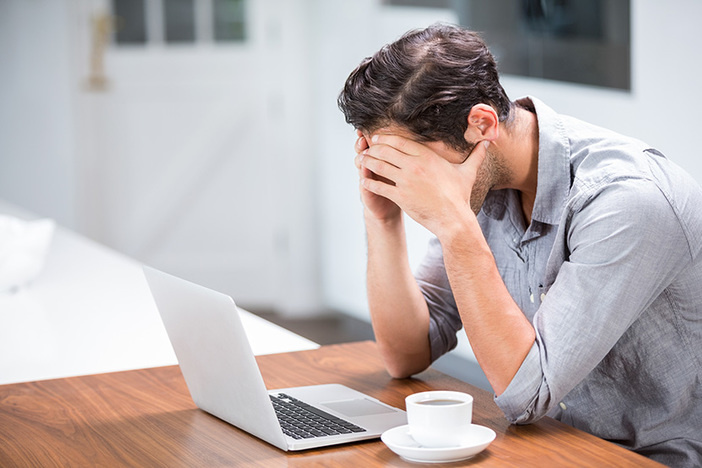 Just a few years ago, I was completely against real estate. I wanted nothing to do with it. I thought that in order to qualify as a real estate investor, you had to pass this unofficial test to prove that you were a money-grubbing jerk who would step over your mother's dead body for a dollar.

Nine months of landlording later, despite all of the research I did, I still made mistakes. Since I learned so much from other people, I am morally obligated to share with you my three biggest mistakes that I made as a first-time landlord and home owner.

My first purchase was an up/down duplex. My plan? To rent the top half and Airbnb the bedroom in the bottom half while making a quasi-bedroom out of the living room. That plan 85 percent succeeded.

What I did not realize was the noise transfer from the top to bottom floor in an up/down duplex is almost unbearable. I can hear EVERYTHING that the folks on the top floor are doing. And yes, I mean everything—from them walking, to their TV, to normal conversations and other noises you don’t want to hear (peeing, sex noises, etc.). This gets very annoying, very quickly.

Aside from the noise, another problem with the up/down duplex is gravity. Everything runs down. That includes plumbing. The water that my top tenants use comes through their pipes down the pipes in my unit into the main line and out to the street. What does that mean? If there is a blockage, guess whose unit gets flooded with a disgusting mixture of kitchen sink and toilet water? ME! Related: Why I’m Not House Hacking (& the Strategy That Will Cover More of My Rent)

This is not to say all up/down duplexes are like this. My advice to you is that if you are thinking of purchasing an up/down duplex, make sure you are with someone else. When you visit the property, have them walk around upstairs while you are downstairs. Have them walk and talk, as noise transfer can be both on impact (walking, dancing, etc.) or airborne (talking, music, etc.). If it seems kind of loud, then it will be almost unbearable when you are dealing with it every day.

On the plumbing issue, it is tough to test this before getting in. I suggest getting a sewer scope done and asking the technician to scope the plumbing lines within the property as well, from the sink of the top unit, through the bottom unit, the main line, and out to the street (or septic tank). This will make sure that the pipes are not blocked, in good shape, and will have a lower probability of clogging.

The up/down duplex I purchased was a complete gut and remodel. The only thing that remained the same was the exterior wall—at least that’s what they said. Supposedly, there was all new plumbing, HVAC, water heater, electrical, roof, and appliances, all of which were under warranty.

The problem with all these systems working together is that they had not yet been tested in a living situation. Most of these upgrades would have failed the "real life" test. For example, it turns out that only 50 percent of the plumbing was replaced. The sludge from the previous occupants was clogging the pipes, which caused a backup in the lines such that my unit flooded every time I turned the kitchen faucet on. The smell was rancid, but the hundreds of flies loved it!

Plumbing was not the only issue. For two to three weeks in the heat of the summer, the AC would continuously trip the electrical breaker and stop working. My Airbnb guests (and I) were not happy. After the electrician and the HVAC company played the blame game for a few weeks, the HVAC company replaced the unit free of charge, but it was very expensive in terms of comfort.

In the winter, one of the PVC pipes on the furnace disconnected and caused a leak. This wasn’t too destructive, but the constant dripping each time the heater turned on and off was quite the annoyance. The HVAC company came to fix it. Again, $0 but a huge pain in the butt.

Then, one of the fuses that transfers electricity from the utility company to the property stopped working 100 percent. This was the line to a couple of the bedrooms and the hot water heater. So, I had a day of cold showers and really creepy electrical problems, with the lights consistently flickering, weird ticking noises, or half-lit rooms. This also was under warranty, but what the heck?! Can’t I just live like a normal human who is lucky enough to live in a developed society?

There have been a few other smaller problems that have resulted from these issues, including some broken drywall, fly infestation, etc. I pray that the large issues are fixed.

Do not purchase an untested new build or a complete remodel. If you do, make sure you do your due diligence not only on the property but also on the person or company who performed the remodel. Do they have a reputation of putting lipstick on a pig?

Putting lipstick on a pig means that they made the place look beautiful to increase the price, but the guts of the property are less than satisfactory. For example, they opted for new stainless steel appliances, hardwood floors, etc. However, the parts you can’t see (plumbing, HVAC, etc.) are not up to par.

Mistake #3: Accepting Too Much Rent

My property was the only one of its kind in the neighborhood. Believe it or not, there was only one newly remodeled up/down duplex attached to a row home. In fact, there were hardly even any one-bedroom up/down duplexes at all. How did I know what to price this unit at? I didn’t. So, this is what I did.

Once I went under contract, I listed the property for rent and started showing it. I started off at a high price and incrementally lowered it until I got a qualified tenant. The price we settled at was a two-year lease at $1,700 plus a $50 monthly pet fee. So, the total was $1,750, which I later learned was likely $200-$300 above market rent.

What’s the mistake here? Well, to start out, despite signing a two-year lease, the tenants no longer live there. We mutually terminated the lease due to a combination of it being too expensive and them not having the space they needed. They would frequently fight, the dog would bark at odd hours, and they would dance across the hardwood floors. The noise made it almost impossible to live beneath them.

Fortunately, I do have enough buffer such that if I reduce the rent, my deal still works. It just doesn’t work as well as it did initially.

Make sure you set the price such that you have a swarm of people interested in your place. After you’ve dwindled it down to three to five candidates who are interested and qualified, make your pick as to whom you think will be the highest quality tenants. Be careful to watch for any discrimination laws!

While this is something I did not learn firsthand, be sure there is a buffer in your rents. Can you reduce your rents by $200 and still make the deal work? If not, you may have yourself a risky deal. If so, there is a high probability you will be able to withstand a market downturn or lower rents.

Don’t get me wrong, I could write a book on all the mistakes I made on my first property. Instead, I spared you the small, insignificant ones and left you with the three largest. Hopefully, this article did not scare you. Clearly, I have made some big mistakes that I am dealing with appropriately, but I am still doing well. And hopefully now you won’t repeat them! Happy investing!

What are the biggest mistakes you learned from your first investing adventures?

Sara Kennedy from Greater Hartford, CT
Craig – this article was SO, so helpful. As someone who is seriously considering house hacking to begin with, I probably would have been blinded with excitement to not even think about these things. And I live in an up/down apartment! Definitely writing down your tips and advice and will do them once we finally start looking. Thanks for sharing your experience!

Tyler Work Rental Property Investor from Denver, CO
I know this one is a year old but thank you Craig! We were just under contract on an up/down duplex (of which contract was terminated) and we brushed aside many of the issues you bring up at the time because the numbers looked so good. This reinforces our decision and provides some additional insight we didn't think of.

Trevor Day from Buffalo, NY
In my area, most (95%) of duplexes are up/down. My understanding is that the lower unit tends to rent for more. Given what you have just said, wouldn't it make sense to live in the upper unit, and then rent the lower? Upper units makes moving in and out tougher, and stairs are annoying, but I've been renting an upper unit for two years now, and noise is rarely an issue. But I'm sure the people people in the lower have heard footsteps, conversations, and other misc "noises".

Patrick Harrington Investor from Bridgewater, Ma
I agree with Trevor, if you move upstairs it would be quieter and you could get more rent for the first floor and the tenants would be happier on the first floor. Also some good points on when rehabbing the house spent the extra money on sound proofing the units better. It is cheaper to install when the walls and floor are I open during the remodel. You will appreciate it and when you move out your new tenants will also appreciate it.

Robert Soto lopez
Thanks Craig, i read a little late, i happen to buy mi first duplex, tomorow im going to do the sound check, thanks for all the tips im going to follow.

Daniel Gengaro from Bloomsbury, NJ
Appreciate this valuable info Craig. I am currently on my way to landing my first HH but reading your book first!

Nidia C. from Northern New Jersey, New Jersey
Thanks Craig! Bought my first house hack this year. Definitely a lot of things you don’t think about until you are actually living in the house!