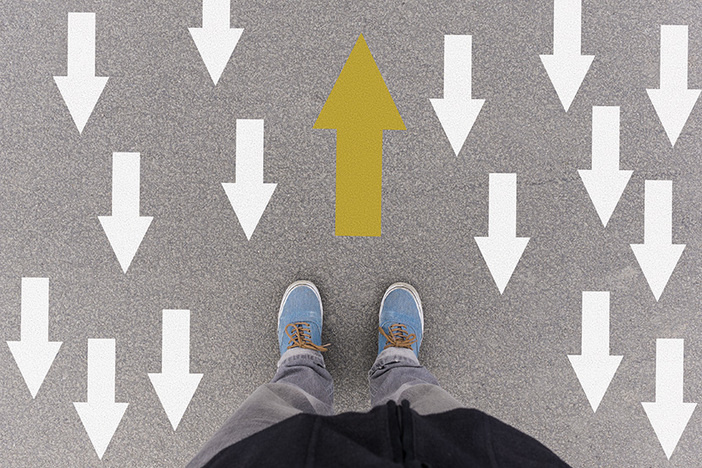 Today I will once again turn to Peter Drucker, the “father of modern management,” regarding how to make effective decisions.

As he notes in The Essential Drucker,

“Effective people do not make a great many decisions. They concentrate on the important ones. They try to think through what is strategic and generic, rather than ‘solve problems.’ They try to make the few important decisions on the highest level of conceptual understanding.”

It’s important to remember that each decision we make zaps a bit of our energy. It’s called decision fatigue, and if you spend all your time making trivial decisions, you won’t have nearly as much mental energy and focus to concentrate on the big ones. Instead, such decisions should become routine, systematized, or delegated whenever possible.

There are, of course, decisions that you will have to make. Drucker outlines the following five steps to the decision process:

1. “The clear realization that the problem was generic and could only be solved through a decision that established a rule, a principle.”

Drucker recommends first asking, “Is this a generic situation or an exception?” If it’s truly generic, it’s probably fairly simple and routine and possibly trivial. When possible, it is best to delegate such decisions or do them as your routine/system specifies.

Related: How Using a Score Card Can Keep Your Real Estate Business on Track

So if you get an application from a renter who has a recent eviction and your policy is not to rent to people with recent evictions, well, that decision is obvious. In fact, it doesn’t really qualify as a decision. You just apply the procedure. Similarly, if it’s a generic decision but you don’t have a policy or procedure in place for it, this is a good time to put one together.

2. “The definition of the specifications that the answer to the problem had to satisfy, that is, of the ‘boundary condition.'”

Here you are asking, “What are the minimum goals it must attain?” The minimum is known as the “boundary condition.” If the question in front of you is whether or not to move to a fancy new office even though your current one is sufficient, ask yourself, “What is the goal here?” If your overall goal at this time is to cut costs, such a move is probably not a good idea.

Drucker makes a special point to warn about “the most dangerous of all possible decisions.” This is a decision that “…might—just might—work if nothing whatsoever goes wrong.” Entrepreneurs are often overly optimistic, which often comes back to bite them. Don’t ever make a decision that needs every little thing to go right in order to work. Something always goes wrong.

3. “The thinking through what is ‘right,’ that is, the solution that will fully satisfy the specifications before attention is given to the compromises, adaptations, and concessions needed to make the decision acceptable.”

Drucker stresses that you must first know what is right before you “can distinguish between the right compromise and wrong compromise.” In other words, you need to approach the decision-making process in a systematic way, rather than haphazardly. Start by figuring out what will actually help achieve the goal you’ve clearly outlined in step number two. Then you can start picking away at it, if need be, with compromises and concessions.

Related: How to Use Key Performance Indicators to Fine-Tune Your Business

The most obvious example of this in real estate is the strike price. It's important to figure out the maximum price you are willing to pay along with your opening offer (or the minimum acceptable sale price and list price when selling). Then negotiate, and make whatever concessions fall below that strike price. If you go in without first deciding the max you will pay, the idea of "winning" will often get the best of you. This is why so many people overpay at auctions.

4. “The building into the decision of the action to carry it out.”

It’s amazing how many great ideas never go anywhere. Without action an idea isn’t really anything at all.

A friend of mine had wholesaled five houses in Indianapolis in 2016, before leaping ahead to wholesale 75 the following year. When asked how he made such a jump, he said it started with reading The Miracle Morning. During his early morning routine, he realized that while he had all of these "great ideas," they just lingered about in his mind and on pieces of scrap paper with scribbled notes on them. He finally started focusing on the actual action steps to finding and flipping more properties. And it increased his production by 1,500 percent!

5. “The ‘feedback’ which tests validity and effectiveness of the decision against the actual course of events.”

A decision, even if carried out, cannot be determined to have been good or bad if there’s no way to measure it. This is why I am a big fan of implementing key performance indicators (KPIs) in every area of your business that you can. Effective measurement can let you know what is working and what isn’t and help clue you in as to whether a decision was effective or not. I discuss KPIs in more detail in this article.

Decision making should not be a willy-nilly process (or more aptly, a lack of a process). It is important to cut out as many trivial decisions as possible and focus on the large ones. And do so in a systematic and effective way.

What tips do you use to streamline the decision-making process?

Sandeep S. Investor from Cupertino, California
Excellent post, Andrew! The reference to Peter Drucker’s philosophy is so apt. The key to growing in business (and life) is to make decisions that matter, are significant and long lasting. Most of us our brain cycles are usually wasted in making trivial decisions.

Andrew Syrios Residential Real Estate Investor from Kansas City, MO
Drucker is certainly great and I really liked the breakdown he gives, especially deciding whether a decision is something that needs to be made into a broader rule.

Cornelius Charles Investor from Oxnard, California
Thanks Andrew. I enjoy your posts. You can find 100s of post about wholesaling, turnkey properties, out-of-state investing, etc., but most of your posts are truly unique and informative.

Frankie Woods Investor from Albuquerque, NM
Fantastic analysis of these principles and application to real estate! Thanks for sharing!