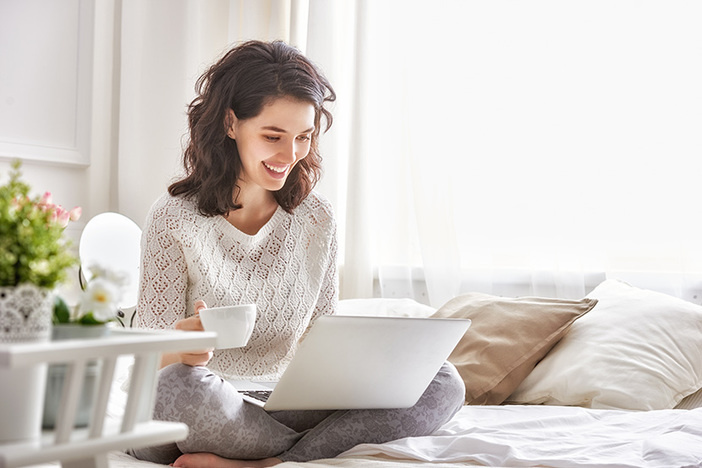 It's hard to imagine having more to juggle than Maria Moser. Maria is a single mother of three, a full-time entrepreneur (with not one but two companies), and a real estate investor.

Amazingly, it’s actually Maria’s duplex that has helped provide stability throughout the ups and downs of entrepreneurship. Here’s the story of how she bought her first rental property, warts and all.

From the comfort—but not quiet—of her house, Maria Moser owns and operates Change-Diapers.com. She offers tips, guidance, and products designed to help parents go green with cloth diapers.

In addition, Maria works with other small businesses to provide social media and other digital marketing services. As if that’s not enough to keep her busy, she also volunteers for a non-profit, providing low-income parents with cloth diapers.

Oh, and did we mention she’s a single mother with three children?

A few years ago, Maria bought her first rental property. It’s a duplex, and through the stormy weather of divorce and the roller coaster of small business revenue, this duplex has helped provide some padding and stability to Maria’s life.

Related: Nakeisha’s Story: From 0-6 Rentals in One Year as a Single Mom

“I’d been interested in creating long-term income and diversified investments for many years,” Maria recounted. But she didn’t know where to start. What kind of neighborhood? What kind of property?

So, she enlisted the help of a long-time friend and real estate agent. "I initially looked into a multi-unit property in my own town (at more than three times the cost of what I ended up purchasing)." But it quickly became clear it was too expensive; the cash flow numbers didn't make sense.

“I searched a good bit in the next town over from me, as well, and as I was asking questions about that one, my real estate agent mentioned one she had listed in the next county over that might be just what I was looking for.”

It’s a quiet urban neighborhood in a small city, “close to shopping and within walking distance to a family-owned doughnut shop. This was not initially my target area at all, but finding it was rather serendipitous.”

What about the property itself? One side of the duplex boasted three bedrooms and two baths, and the other two bedrooms, two baths, and a large laundry room. And it was turnkey, already rented to long-term tenants.

To avoid a conflict of interest, Maria's real estate agent insisted they bring in a new buyer's agent to represent her since she had the listing. The final negotiated price: $129,000.

Pop the champagne corks, right? Sit back and just start collecting rent checks? Not so fast.

After a few short weeks of owning the duplex, repairs started rearing their ugly head. "I was initiated into the landlord life when my soon-to-be ex-husband ("wasband?") told me fixing the slight bathtub leak was a simple repair that he could handle."

We all know how stories like that end—repeat trips to the hardware store, many nights and weekends spent trying in vain to fix the problem. Then there’s the bitter taste of defeat when you end up having to call a plumber after all that wasted time and money.

Nor was that the end of it. “Just a few months later, I paid another $471 to fix a toilet leak on the same side. This may not seem like a lot, but I wasn’t prepared to have all these expenses within a few months of purchase.”

Later that same year came a love letter from the city government. "I received notification from the city that they had conducted an exterior inspection and that the fence was ‘deteriorating' and needed to be repaired or replaced."

The bill for this city-imposed repair? Another $2,525.

It only continued the following year. “The next year saw a $700 plumber bill to replace the toilet on the other side. This was followed by another $700 to replace a bathroom faucet, then $650 to unclog a kitchen drain, add a trap, and repair a leak.

“When the tenant on the other side complained of a leak at the kitchen faucet, my husband declined to have me call the plumber again and replaced it himself at a cost of $96.44. Fortunately, that didn’t end in disaster like the first repair.”

Then one tenant reported seeing mice. Cue a contract with a pest control company to the tune of nearly $1,500/year.

Related: An FHA-Financed Duplex is an Ideal First Investment Property: Here’s Why

More Love from the City

Maria’s first run-in with the city was their demand that she upgrade the fence (cost: $2,525). It wasn’t her last.

When she had her first turnover, she was in for a rude awakening. She learned that in between each tenancy, the city requires an interior inspection of the unit. In my experience, that means work orders every single time—it’s the easiest way for inspectors to prove to their supervisors that they’re actually visiting each property.

Sure enough, the inspector required a handrail be installed leading to the unfinished attic—never mind that it was kept padlocked shut and the tenants had no access to it.

The inspector didn’t stop there. He ordered extra paint work done to comply with the city’s aggressive lead paint regulations. All porches must be painted! Total cost: $1,042.

“Then I had to purchase and install new carbon monoxide detectors to comply with a new requirement from the city,” Maria explained wearily.

When Does This Story Turn Positive?

Amazingly, despite all of these unexpected repairs, work orders, and expenses, Maria still earns positive cash flow. She bought the property for $129,000 and put down 25 percent ($32,250), borrowing a 15-year mortgage for the other $96,750.

The combined rent from both units is $1,600/month, which has left Maria with roughly $550/month in positive cash flow—that’s after she’s averaged out all of the repair costs, vacancy costs, mandatory work orders from the city, her taxes, insurance, and interest.

It does not include her principal paydown, however. Sure, she could be earning much more in cash flow with a 30-year mortgage, but Maria is looking at the long-term. At an interest rate of 6 percent, Maria's loan would cost $50,207.40 for a 15-year amortization. That would have more than doubled if she had borrowed a 30-year loan, with total interest of $112,075.20.

Another cost Maria avoided is private mortgage insurance (PMI). Because she put down 25 percent, she doesn't throw money away each month for PMI.

Despite all those repair bills, in most months Maria earns much, much more than $550/month. She puts aside money for repairs and CapEx to keep a cushion for when it comes time to pay the piper.

“Expect the unexpected. Have a cash reserve of at least six months’ rent,” Maria recommended when I asked her about her advice.

As an entrepreneur, she already had experience with how uneven the profits can be in ventures like this. Saving money has become second nature to her, and while it may not be as fun as spending it, learning to live on a fraction of your income pays incredible dividends.

“With rental properties, it can be months of smooth sailing with no issues whatsoever, followed by a 9:00 p.m. phone call that there’s a squirrel in a tenant’s bathroom or a call from the city saying you need to replace your fence.”

Maria has also had a positive experience with property managers. When she first bought the duplex, it was already occupied, so she managed the property herself. After her first turnover, she hired a property manager for that unit.

“The manager was able to rent the property for $150/month more than the previous tenant (who came with the property) was paying, so it is still earning me more.”

Perhaps best of all, Maria no longer has to directly deal with the tedious demands of the city or coordinate the repairs. After all, she’s busy growing two businesses, volunteering, and, oh right, raising three kids by herself!

How did you come to buy your first property? What challenges have you faced? How have you minimized the risk of incessant work orders from your local government?

Ben Ruskin
Good story Brian. It’s a good reminder that most people are not too busy to invest in real estate. And if we think we are too busy, it very well might mean that we aren’t prioritizing our money and time correctly. “But I don’t want to deal with plumbing or city assessments…” Well, like in your example, when people invest smart, the property pays for its own expenses and cash flows most months of the year.

G. Brian Davis from Baltimore, MD
So true Ben! It’s a matter of priorities. And I’m a huge believer that investors should always include property management fees in their cash flow calculations, regardless of whether they intend to manage the property themselves. It’s a labor expense either way, and you never know when you’ll want to outsource management.

Michael O'Leary
What percentage of the rent goes to the property management fee?

Rachel Luoto Rental Property Investor from Bremerton, WA
$700 for a bathroom faucet!? Dang. When we don’t know how to do something, we negotiate with the contractors to teach us how to do it as part of the job. More knowledge, and money and time saved!