Ever wonder whether people really do vote with their feet?

Each year, nationwide moving service United Van Lines releases sweeping data on where Americans are moving. These reports reveal a great deal about where to expect economic growth in the years to come and how the country is shifting. They released their 2016 report a week or so ago, around the same time as I read Attom Data Solutions’ latest report on property taxes, and I noticed a curious pattern. Americans seem to be leaving many of the same states with the highest property taxes.

But as I poured over the property tax map, immediately a huge outlier jumped out at me. Texas imposes high property taxes but no income tax, and it has more people moving in than moving out. Clearly, property taxes only tell part of the story.

How do migration patterns within the U.S. relate to the total tax burden in each state? How have real estate values recovered in states with high inbound migration compared to high outbound migration? And what actionable information can real estate investors take away from all of this data?

Total Tax Burden for Each State

State taxes come in three primary colors: property tax, income tax, and sales/excise taxes. Together, they form what WalletHub refers to as a state’s “tax burden.”

Tax burden is a nifty measure, totaling the percentage of the average resident’s income that goes toward property tax, income tax, and sales tax in a given state.

New York, imposing the highest tax burden, demands nearly two-and-a-half times the portion of its residents’ paychecks as Delaware does, with its low tax burden.

Here’s a map of the United States, with each state ranked by tax burden:

To gain a better grip of what the highest and lowest tax states look like, let’s list them out, with a breakdown of each tax type. Below are the states with the highest tax burden:

Now for the states with the lowest tax burden:

So, which states are Americans leaving, and where are they moving?

For years now, Americans have been moving away from the cold, high-tax states of the Northeast and Midwest. Where are they moving? South and west.

As 2016’s data indicates, this migration trend is only increasing.

Take a look for yourself:

See that big swath of yellow in the Northeast, running through the Midwest?

But this data is best seen by cross-referencing migration rank with tax burden rank:

Oh, and in case you’re wondering the degree of these migration imbalances? They’re high: Almost twice as many people moved out of New Jersey, Illinois, and New York last year as moved in.

There are exceptions, of course. Look at Vermont—it’s cold, the taxes are high, yet people are flooding this small northeastern state. Why? It’s tough to say, but it doesn’t hurt that Vermont has a friendly culture, low crime rates, great skiing, and good beer. We’ll revisit Vermont later in looking at its real estate recovery, though.

For real estate investors, property taxes matter more than the other state and local tax types. After all, you’ll owe property taxes no matter what if you own property in a given state, but you’ll only pay income and sales taxes if you actually live there.

But unlike sales and income taxes, property taxes vary by county, not by state. Still, a similar pattern emerges, when you look at a county-by-county map of property taxes: 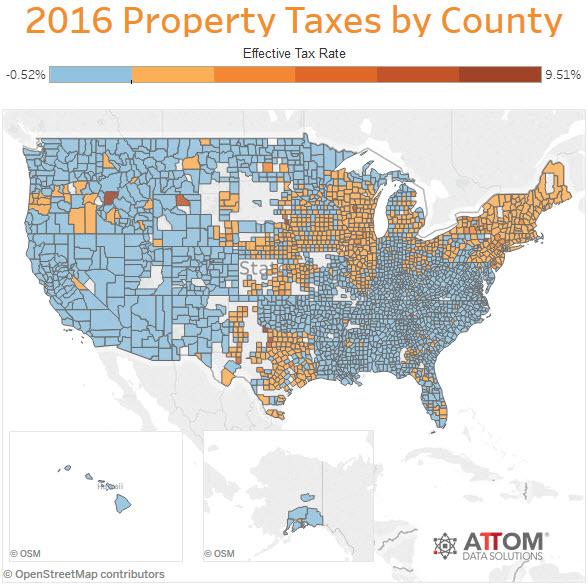 Yep, still a big ol’ swath of orange running through the Northeast and Midwest.

You’ll also notice Texas lit up in orange, but as mentioned above, Texas offsets its high property taxes by not charging its residents income tax. Its total tax burden is relatively low (ranked 34), and more people are moving in (54% of moves) than out (46% of moves).

Real Estate Recovery Since the Recession

Here’s a breakdown of real estate appreciation in the top inbound and top outbound states, over the last five years:

As for those outliers, did you notice anything funny about them? Vermont ring any bells? Its high tax burden may not have prevented inbound migration, but it doesn’t seem to have done any favors to its real estate appreciation. Most notably, Vermont has especially high property taxes, with a property tax burden of 4.96%.

Likewise, Kentucky suffered plenty of outbound migration, yet its real estate appreciated at a whopping 41.9%. It’s also a lower-tax state compared to others on the outbound list, with particularly low property tax burden of 1.99%

What does all this mean for investors?

Second, tax burdens have a direct impact on real estate investors’ bottom lines. Property taxes affect cash flow and margins in a significant way. Here’s a quick illustration: The average annual tax bill in Alabama in 2016 was $776. In New Jersey, it was $8,477. That means that the average New Jersey property tax bill cost almost the same amount in a month as the entire year’s bill in Alabama.

High income and sales taxes further eat into margins and take-home income if the investor lives there.

In other words, states with high inbound migration rates and low tax rates are a great place for investors to look for growth and returns.

Proponents of high taxes will argue that correlation does not necessarily indicate causation. Maybe people aren’t leaving because of the taxes, but because of some other reason? In other words, maybe it’s just a coincidence?

Taxes aren’t the whole story, of course. Climate, culture, economic growth, and cost of living all impact where people choose to move, in addition to tax burdens. But economic growth is driven by population growth, as well as greater spending and investing by local residents. All of these appear to be happening more in lower-tax states.

Entrenched defenders of high taxes can contend that it’s just a coincidence, but no matter how your slice it, the fact remains that Americans are moving away from high-tax states and into lower-tax states. It’s those states that will see the economic benefits of all these new residents.

As a parting thought, consider a poll released this week by NPR that found that 77% of Americans believe their income taxes are too high. If you’re one of those who agree, well, it’s never too late to vote with your feet—or at least invest with your wallet in lower-tax states.

Fire in the hole! Cue the political debate, and the accusations of cherry-picking data (which, of course, I didn’t—these are all politically-neutral data sources and the best and most recent available). But seriously, what do you all think about these trends? On a more personal level, have you considered taxes as part of an interstate moving decision?