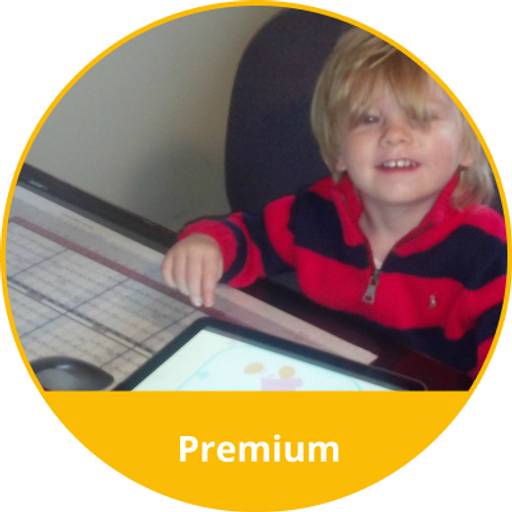 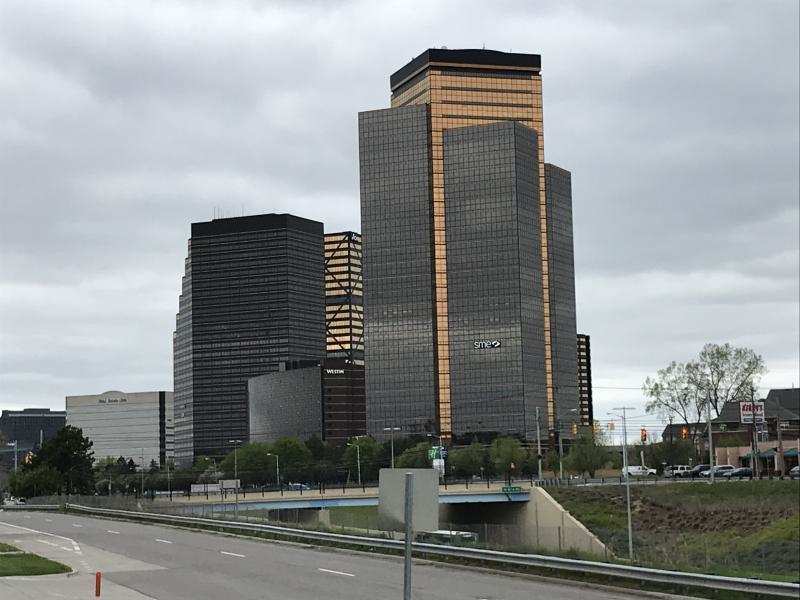 Metro Detroit is famous for its strong rental market scene and affordable housing stock. So if you're an investor looking for buy-and-hold rental opportunities, Metro Detroit is probably already on your radar.

However, the area is also notorious for confusing investors, especially those investing from out-of-state or country. With a total of 185 cities and 290 neighborhoods, you may be overwhelmed and unsure of where to look for investment opportunities in Metro Detroit.

Well, you've found your solution. This is our Deep Dive series that evaluates each city and neighborhood in Metro Detroit—one at a time. We based our evaluation on the factors contributing the most to a successful investment, including the expected returns and the type of property management required.

Not only will these guides be highly informative, but they will point you towards the specific area you should expand or begin your rental investment portfolio in. We're not covering just the City of Detroit, but the greater Detroit-Warren-Dearborn Metropolitan Statistical Area (MSA) area—Metro Detroit, for short.

In writing this “Deep Dive into Metro Detroit Neighborhoods” series, we used our 20+ years of experience (both as residents and property managers in Metro Detroit) and in-depth research from multiple data points. These articles will give you all the details you need to identify the strengths and weaknesses of each area—positioning you to make well-informed decisions for your investments.

Southfield is a medium-sized city in Oakland County, Michigan. Because of its location, we consider Southfield to be a "Ring City"—a term we coined for the cities directly bordering the City of Detroit.

Southfield currently has 73,174 residents living in 23 neighborhoods. The population density is estimated to be 2,747 people per square mile (7,114.697 km2). There are 72,700 households here—where the majority of households are composed of 1-2 members. This number is generally lower than the national average household size of 3.14 per home.

Niche ranked Southfield as #57 in "Best Places to Retire in Michigan". The city mixes an urban and suburban feel with many restaurants, coffee shops, and parks. The locals are largely young professionals and retirees looking to have a laid-back lifestyle. The majority of them (85.6%) drive their own cars to get to their place of employment. Their jobs are a mix of both white- and blue-collar positions in administration (13.36%), management (9.12%), and sales (8.78%).

Compared to other Metro Detroit cities around it, Southfield's average rent for a three-bedroom house is more expensive than Oak Park and the City of Detroit. However, it's more affordable than some more affluent areas, such as Farmington Hills and Berkley.

Southfield was incorporated into a city only 63 years ago, in 1958. Nevertheless, it's now home to offices of more than a hundred Fortune 500 companies. Within the city also stands the Southfield Town Center complex with five interconnected office buildings—one of them being the majestic 3000 Town Center standing at 402 feet (122.5 m) tall. The building is Michigan's second-tallest building outside the City of Detroit and the 16th tallest building in the state overall.

Southfield is easily considered a commercial and business center of Metro Detroit. It has the second-largest amount of office space at 27,000,000 square feet (2,508,400 m2), next to the City of Detroit's central business district. As a result, many young, single, and mobile-first professionals are attracted to the city.

Is all this info enough to say that Southfield is a good place to invest? Let's take a look at the numbers.

We’ll use rent-to-price ratios to estimate the quality of cash flow you can expect from rentals in Southfield. You ideally want to have a ratio that is at least 1%—indicating strong cash flow generating properties.

According to City-data, the median gross rent (as of 2019) is $1,133 per month. We can see this average reflected in current listings of homes for rent in Zillow: 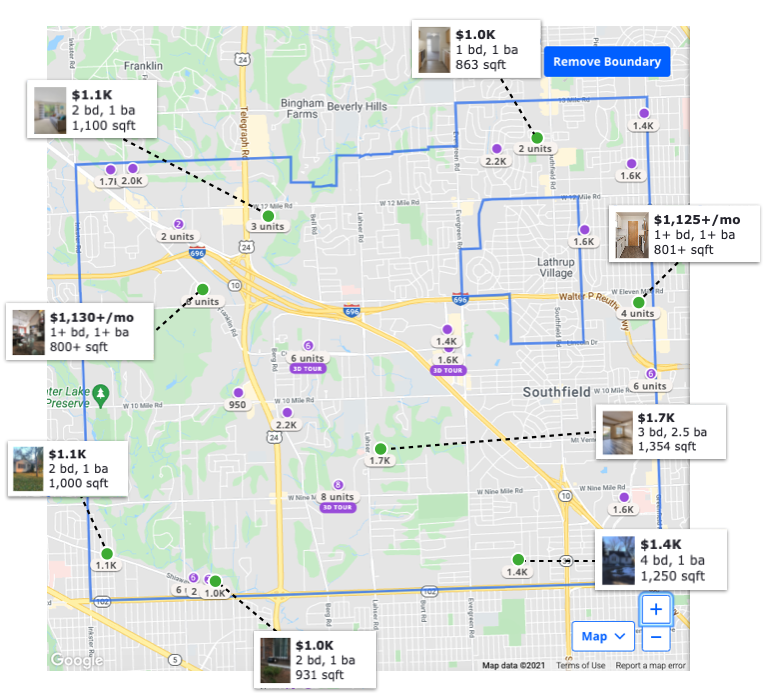 According to BestPlaces, the rent average in Southfield is generally higher than the rest of Metro Detroit MSA and the state of Michigan. Here is an overview of the rent for each housing size/type in Southfield (keep in mind that this data is outdated, and doesn’t reflect the higher rent amounts currently on Zillow in 2021). 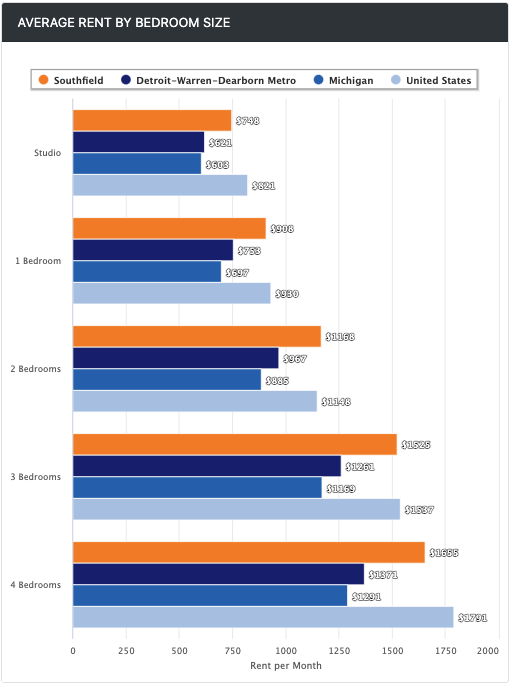 Although it’s a bit lower than what we’d like, it’s relatively near to the average 1.0-1.5% ratios of the Ring Cities around the City of Detroit. Rent averages and purchase prices can still vary from one Southfield neighborhood to another, which means there are still good cash flow opportunities in the city if you know where to look. To the western side of Southfield is where you’ll generally find more affordable properties with higher cash flow potential.

According to Zillow.com, the average house value in Southfield is $215,553. This number is an increased by 10.7% over the past year. Zillow adjusts this value seasonally and only considers homes in the middle-price tier. 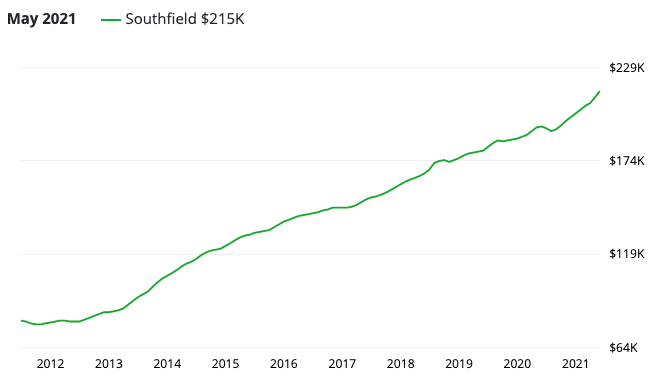 Looking at Redfin's data from June 2021, we can see that home prices in Southfield were up 15.6% versus the previous year and sold for a median price of $211K. Many homes in Southfield get multiple offers, with some having waived contingencies as well.

On average, houses in Southfield sell for 1% above the list price and go pending in less than two weeks. If these are "hot homes" (a term coined by Redfin to describe the homes they expect to be competitive in the market), they can sell for as much as 7% above the list price. These numbers make Southfield a "very competitive" real estate market, based on Redfin's Compete Score. 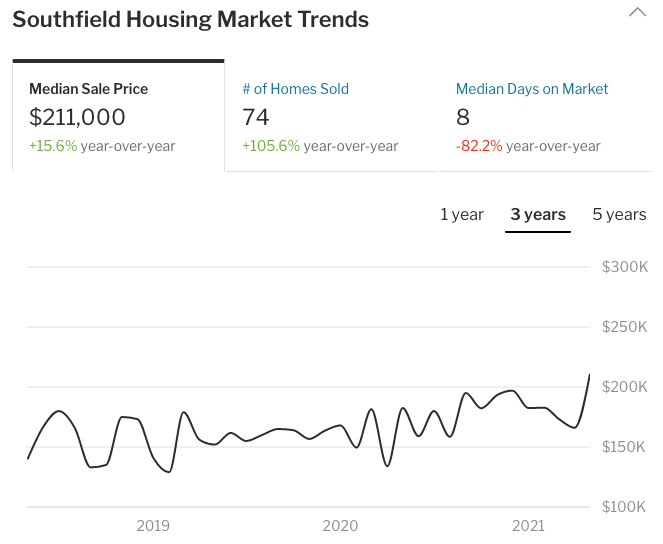 A quick browse in Zillow shows that the homes for sale are considerably larger, with three-bedroom homes being the most popular, next to four-bedroom ones. Properties in Southfield are mostly SFH properties (46.7%), with apartment complexes closely behind (39.1%). There are also a handful of townhomes (8.3%) and small apartment buildings (5.5%).

While there are exceptions, properties nearer to the shared border with the City of Detroit tend to be more affordable than those in the north. Properties along Eight Mile are generally priced below $200k, while those nearer to Berkley (a more expensive area) cost above $200k: 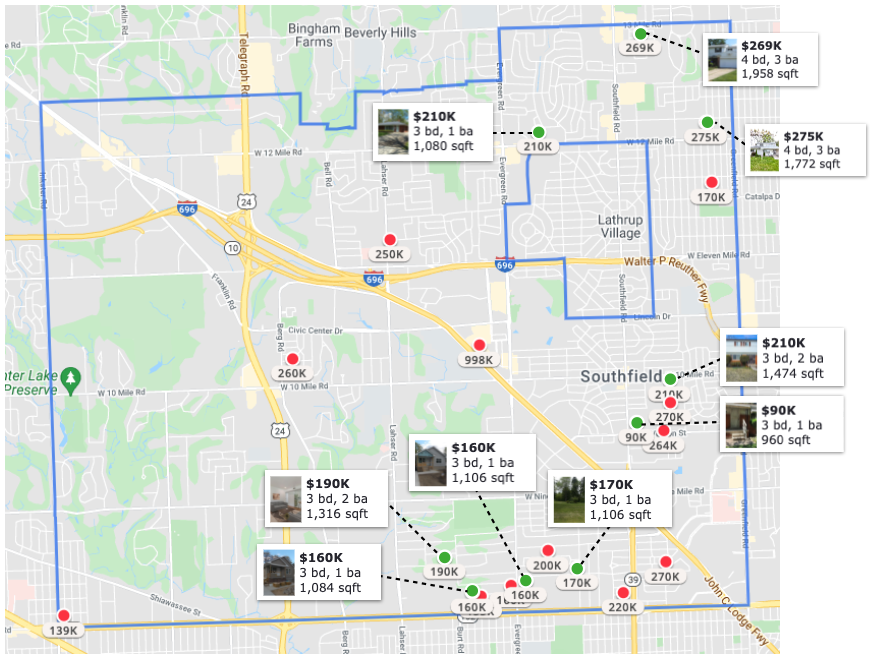 In terms of appreciation, Southfield is an attractive place to invest in equity gains. Based on the map from Neighborhoodscout, a good portion of the city falls on the higher end of their appreciation scale: 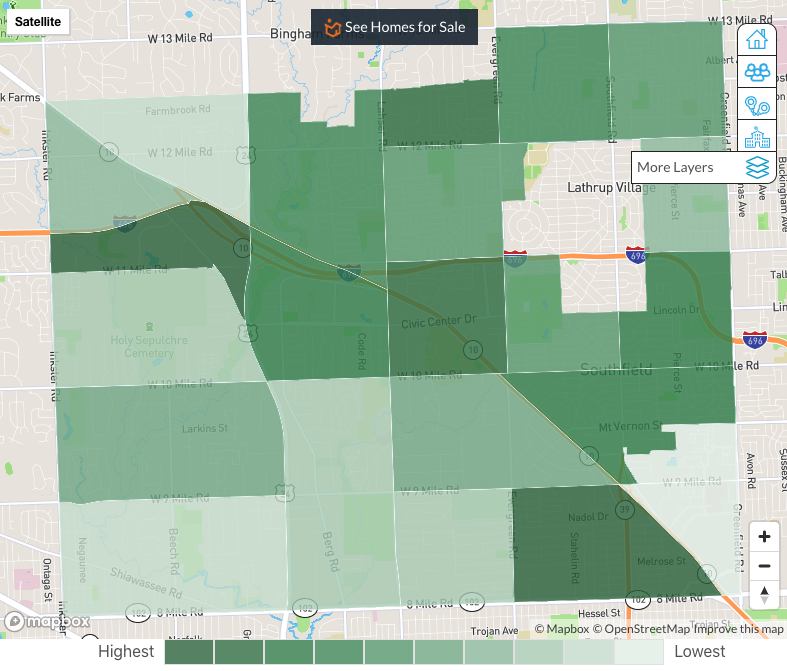 Quality of Tenants, Properties, and Living

As a rental property investor, you need to consider the tenants you’ll attract, the property conditions, and the overall attractiveness of the city you’ll invest in. We’ve done the research for you to score Southfield based on these three factors.

We used our local knowledge and various data points to give you an accurate overview of the area. However, take these results as a guide—not definitive measures—to understand the factors contributing to your success as a rental investor.

Average Property Class and Condition: B+ 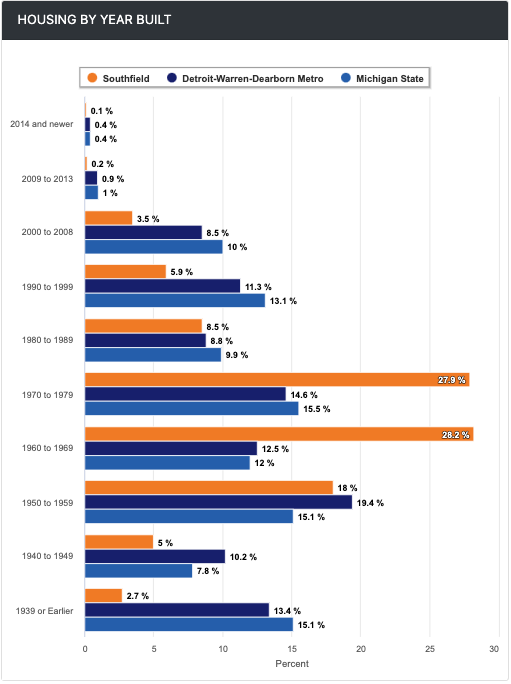 Generally, homes that are above 50 years old are considered “old” homes. Since properties in Southfield have an average age of only 48, you have a lesser chance of running into properties that require rigorous maintenance and repairs before renting them out. Most of them only need a few touch-ups and a fresh coat of paint before they’re good to go.

Quality of Life in the Neighborhood: A

It's important to choose neighborhoods with a good quality of life even if you won't live in your own rentals. These kinds of neighborhoods would naturally attract high-quality, responsible tenants who'll pay rent and care for your property. In other words, neighborhood class and livability will impact your rental's profitability more than any other factor.

Let’s take a look at the quality of life in Southfield:

Southfield is nicknamed “the center of it all,” referring to its ideal position at the heart of Metro Detroit. As described earlier, Southfield is home to many businesses across multiple industries. Some of them are noted by Bonner Advisory Group in 2016:

According to GreatSchools, you can find 54 schools in Southfield—including 11 public district schools and 34 private schools. Some of the top-rated ones include AGBU AlexMarie Manoogian School and Vandenberg Elementary School, among many other options.

These schools will attract tenant families with younger children who are still in school.

Bestplaces further supports the crime and safety rates in Southfield: 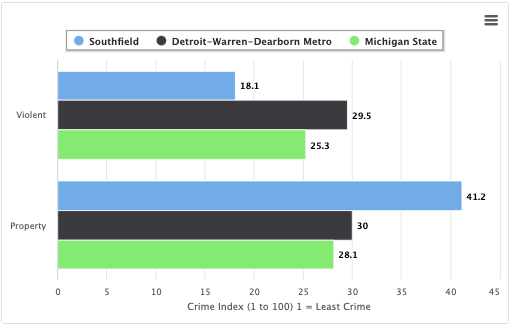 It must be said that the crime rates will vary from one neighborhood to another, much like other cities in Metro Detroit. You can find a property in an area deemed “unsafe,” only to find perfectly safe neighborhoods just a few streets away.

In terms of overall livability, Areavibes gives Southfield an “excellent livability score” of 72. Based on this number, Southfield livability ranks #307 city in the state of Michigan and #10,906 in the entire country.

Life in Southfield is attractive to retirees and young professionals. These demographics seek affordable housing near downtown areas but may be priced out of nearby Farmington Hills, Beverly Hills, Royal Oak, and Huntington Woods: 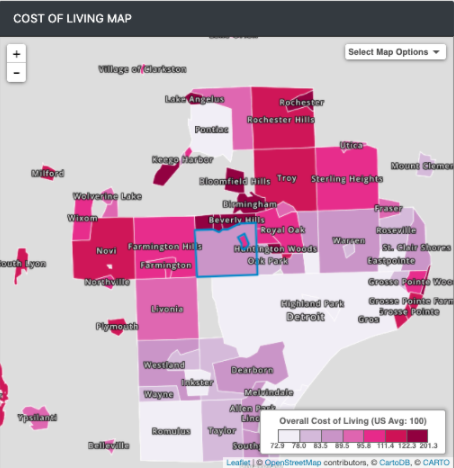 Tenant Class and Demographics: B-

Tenant quality is the difference between responsible tenants (those who pay on time and maintain the property) and problematic ones who will do the exact opposite. Since you're a rental property investor, you need to carefully evaluate the tenant pool quality in your area of investment.

We’ve assessed the tenant pool of Southfield based on the key factors related to tenant class and demographics. But with the effects of COVID-19 still lingering, it must be said that some of these factors (e.g., income and employment) might still be affected. 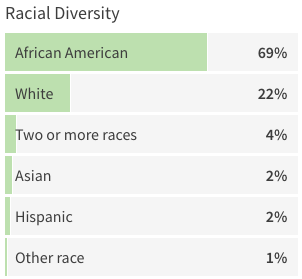 Based on this information, you can expect the tenant pool in Southfield to be in the middle of the spectrum. Even after learning these things, it's still best that you conduct a thorough screening of applicants to ensure that you secure responsible (or manageable) tenants. Doing so will make Southfield a relatively low-risk investment area for rental properties. 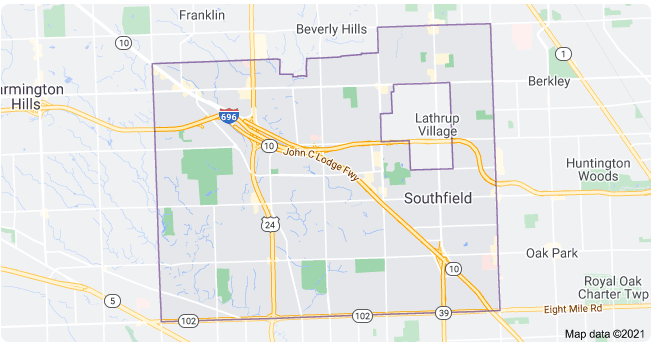 We gave Southfield an overall rental investment score of A. This is score is based on the following key factors, where we gave more weight to the financial viability of Southfield’s properties:

Moreover, the average property quality in Southfield is ideal (there aren't many old homes), the quality of life is attractive, and the tenant class and demographics make the city a relatively safe investment area.

Based on our knowledge and experience, rental investors should strongly consider Southfield—an up-and-coming area filled with investment opportunities. If you're looking to buy, rent, or invest in the Metro Detroit area, we'd highly suggest that you start with Southfield—one of Michigan's major commercial areas. The city boasts of its property appreciation rates and is equally attractive to those investing for cash flow.

Nevertheless, every property scoring system will inevitably be subjective. The best advice we can give you is to visit the city yourself and look for specific properties that can give a good balance of cash flow and appreciation. If you need more guidance before investing in Metro Detroit, feel free to reach out to us, we'd be glad to help.

This article is part of our ongoing series that covers all the cities and neighborhoods in Metro Detroit. We won’t stop until we’ve covered them all!

Any other areas you’d like us to prioritize in our next deep dive? 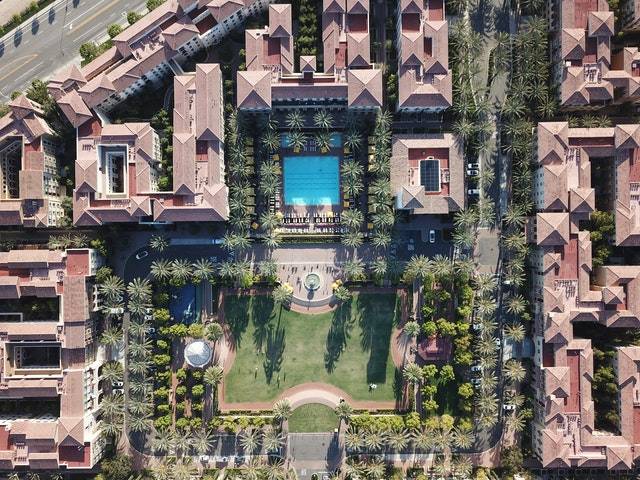 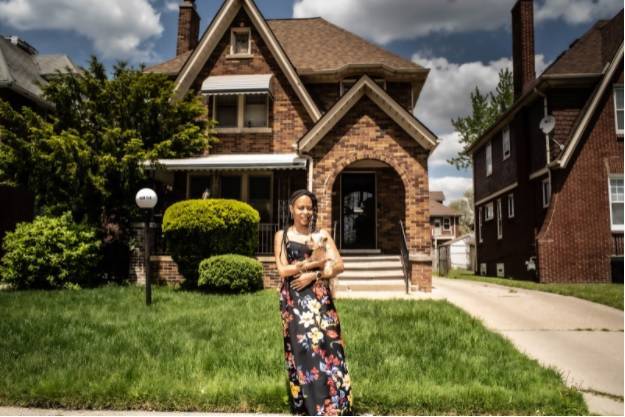 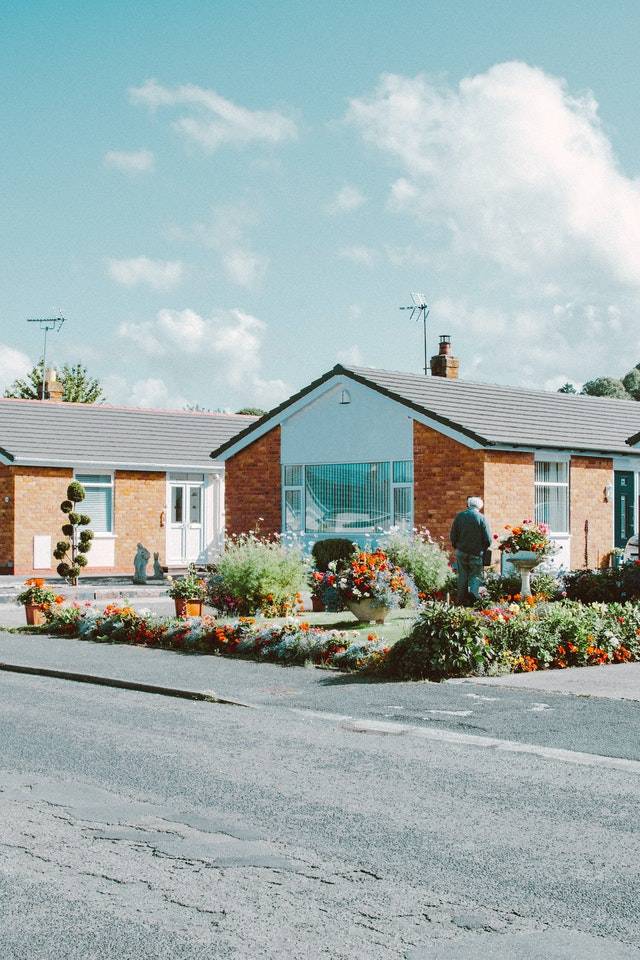