History repeats itself. But never identically and never waving a giant neon sign reading, “This happened before!”

To glean insights into the future based on the past, you need a genuine understanding of that past, and you need to contextualize how the present looks similar—and how it’s different.

The Great Recession was different in many ways from today’s COVID-19 recession. Over a decade ago, the world plunged into a recession based on economic fundamentals: a housing bubble, irresponsible securitization of mortgages, over-accommodative monetary policy, overleveraged banks and corporations. This recession was caused by an external force, and the collapse happened far faster than the slow-burning crisis of 2007-2009.

Yet plenty of parallels remain, and in those parallels, we can not only make more educated guesses about the future but use them to protect our assets—and perhaps even come out ahead financially when the dust settles.

Related: 5 Ways the Next Recession Can Make You Rich

It Takes Longer to Stand Up Than to Fall

Going back to World War II, the average bear market has taken 13 months for stocks to fall from their zenith to their nadir. But they take longer to recover: From the trough to climbing back to the pre-bear market high took an average of 22 months.

It took 16 months for the S&P 500 to reach its lowest point during the Great Recession. Investors had to wait another four years before stocks recovered their lost ground in 2013.

If that sounds bleak, consider that stocks recover faster than just about any other financial indicator. Take the unemployment rate for example. It reached a recent low point of 4.7% in 2007, then surged over 10% during the Great Recession. It didn’t reach 4.7% again until almost halfway through 2016. When the stock market had fully recovered in 2013, the unemployment rate in the U.S. was still over 8%.

Which raises a related point: businesses and investment assets (the foundation of the wealthy’s income) recover faster and farther than wage incomes (that sustain the working- and middle-classes).

The Working- & Middle-Classes Get Hit Harder

Adjusting for inflation, median U.S. incomes peaked in 2007, before collapsing nearly 10% over the next five years. This means real incomes kept falling years after the Great Recession technically ended in 2009.

It took nearly 10 years for the average American to recover their pre-recession income. Inflation-adjusted incomes didn’t surpass their 2007 levels until 2016.

Next, consider net worth. The bottom 50% of Americans reached peak asset holdings in early 2008 and didn’t surpass that peak again until late 2017.

In contrast, the top 90-99th percentile of Americans recovered their previous peak in net worth by early 2011. And by the end of 2019, they had nearly doubled their net worth since the Great Recession’s trough.

That jump in net worth among wealthier Americans was largely driven by stocks. The top 10% of U.S. households own roughly 84% of the country’s stocks. Making matters worse for “Joe Six-Pack,” the percentage of Americans who own any stocks at all has dropped since the Great Recession, as middle-class workers got spooked.

From a pre-recession high of 62% of Americans owning at least some stocks, that number dropped to a post-recession low of 52% before rebounding slightly to 55%. 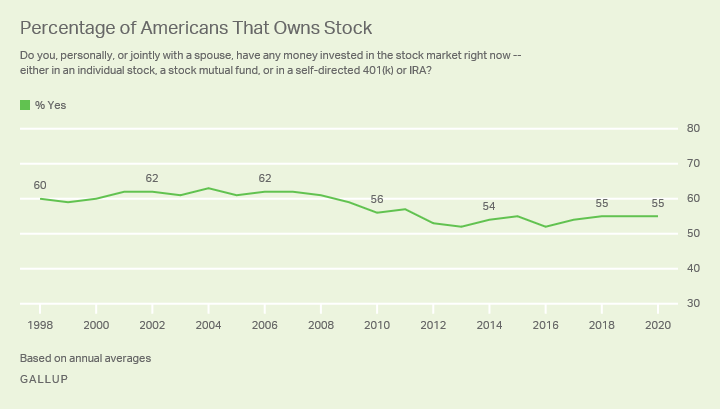 Too many Americans stuck around for the market collapse, only to flee stocks and miss the subsequent recovery.

Everyone knows the famous quote by Baron Rothschild: “The time to buy is when there’s blood in the streets.” It was true 300 years ago, and it’s true today.

In times of recession and economic crisis, asset prices typically fall. That’s bad news for anyone holding those assets at the time—if they panic and sell. It’s good news for the calm, collected investor who resists the herd psychology of panic and scoops up assets like stocks and real estate while everyone else cries that the sky is falling.

This is not to say recessions don’t bring greater risk for investors. Anyone looking to invest in real estate during the pandemic should understand heightened risks like eviction restrictions included in the CARES Act. But with those greater risks come greater opportunities. Looking back at the Great Recession, the average American home value fell roughly 30%, then recovered with a vengeance between 2012 and 2020.

While it’s too early to parse any larger real estate trends from the COVID-19 recession, stock investors saw a deep plunge of over 30% early in the pandemic, before recovering most of those losses in mere weeks.

But in order to invest during times of crisis, you need more than a steady hand and keeping your cool. You also need cash to invest with.

Related: Will the U.S. Face Another Foreclosure Crisis in 2020?

Cash Is King During Recessions & Their Recovery

Having cash to invest helps in any era, of course. But that’s not the only factor at play during recessions.

In recessions, lenders typically tighten up, requiring stronger credit scores and debt-to-income ratios, even as they lend lower LTVs. So while working- and middle-class Americans see their incomes fall and their debts rise during recessions, they have a hard time borrowing a mortgage to invest in real estate. This leaves less competition for cash investors, who can score excellent deals during times of crisis. Because during recessions, there are more distressed sellers, more people who need to sell now, to settle within the next five days.

Cash investors can deliver that speed; leverage investors can’t. At no time does cash’s crown shine brighter than during recessions.

All of which reinforces why you should pursue financial freedom during “normal” times, during economic expansion. The more wealth and investment assets you can build during expansionary periods, the better positioned you’ll be when economic crises hit—positioned not just to survive them but to capitalize on them and thrive.

Looking back over the last century, real estate values have proven far more stable than stocks. “Housing is a basic necessity and therefore are more resilient and not as volatile as stocks,” notes Chuck  Hattemer, co-founder of Onerent Property Management. That lower volatility helps reduce the risk of investing in real estate versus stocks and makes real estate a great asset to own during recessions.

Curiously, rents have remained even more resilient and stable than property values. One of the main reasons real estate prices are so much more stable than stock prices is their low liquidity—it takes months to sell a property on average, compared to seconds to sell a stock. Yet rents are free to shift and move with no lag time between when a property lists for rent and when the two parties can execute a lease and the tenant moves in.

Here’s the price index for rents since the early ’60s:

As you can see, rent growth tends to flatten slightly during recessions. But nationwide rents never drop like stocks do, or even like nationwide home prices occasionally dip:

On the local level, investors can forecast rent and home price changes to a degree. “Since job growth and company expansions dictate where renters will live, they are stable predictors for where housing demand will rise in the future,” continues Hattemer. Rents may not be perfectly predictable, but they’re certainly more predictable than stocks.

Recessions hit everyone, rich and poor alike, reducing their incomes and net worth. The wealthy may recover faster, but they still get hit.

That drives many renters and homeowners alike to ditch their expensive home in favor of something more affordable. We’re already seeing this play out. A study by HousingWire found that far more renters plan to non-renew their leases than usual in the wake of the coronavirus pandemic, with only 26.1% of renters planning to renew. But those numbers are even uglier for higher-end rentals: Among tenants paying $1,750 or more, only 18.7% plan to renew.

Indeed, homebuilders have overbuilt luxury homes over the last decade, chasing the higher margins they offer. That leaves a shortage of affordable housing and a glut of luxury homes.

Recessions strain local and state government budgets. They collect less revenue across the board, as businesses and individuals earn less and spend less.

Here’s the catch though: Governments that raise taxes in the wake of recessions rarely lower them again once the recession ends. That leads to an endless broadening of tax burden.

Consider my home state of Maryland. In the Great Recession, Maryland raised its sales tax from 5% to 6%, raised its corporate income tax from 7% to 8.25%, raised its tobacco tax by another $1 per pack, and instated a new 6.25% “millionaire tax” in addition to all the existing taxes on high earners.

To this day, Maryland still charges all of those higher taxes (with the exception of the millionaire tax—more on that momentarily). When the crunch of the Great Recession passed, they simply found fresh ways to spend that extra tax revenue.

The millionaire tax was a particularly telling case study in taxation gone awry. In the year after the tax went into effect, Maryland saw a 30% drop in millionaire filers. Some of that drop could have come from the impact of the recession itself, of course. But many of the filers who previously fell into the group covered under the new tax moved out of state and didn’t file a Maryland income tax return at all in the following years.

Realizing their mistake, Maryland later retracted the millionaire tax. But the damage was done; a study by Bank of America Merrill Lynch estimated that Maryland lost over $1 billion tax revenue over the millionaire tax debacle in 2008 alone. And you can be sure those high earners didn’t suddenly move back to Maryland after the tax was revoked.

The bottom line: recessions can increase the tax divide between high-tax and low-tax jurisdictions. Already, the state with the highest tax burden (New York) charges nearly three times as much as the state with the lowest tax burden (Alaska). Consider voting with your feet if you find yourself in a high-tax state—tax policies certainly won’t get better in the aftermath of today’s recession.

Today’s coronavirus recession isn’t the Great Recession 2.0. The causes were different, the financial system was on more stable footing going into it, and it happened far faster. Housing and mortgage markets have changed quite a bit since the Great Recession and have not driven today’s recession.

But that doesn’t mean we can’t draw any parallels, or learn from the last recession.

Those with cash to invest can expect opportunities but also greater risk than usual. Beware of asset price swings, stagnating rents, and higher rent default and eviction rates than usual, in addition to eviction backlogs once moratoriums lift.

All in all, those who aggressively saved and invested during the bull market find themselves in a far better position today than those with fewer assets. Learn from recessions and expansionary cycles to always invest more of your income than you think you need to. Because while recessions are hard on everyone, they’re far kinder to those with means and financial savvy.

What lessons from the Great Recession do you believe apply to today’s coronavirus recession?

Join the discussion in the comments below.

These 14 States Are Facing Higher Real Estate Insurance Premiums—Is Your State On The List?
The Fed Basically Admitted It. They Want a Housing Correction
House Before Spouse: Single Women Are Buying More Homes Now Than Ever