Brandon Turner is a man of many talents. Whether it be building a real estate empire, growing a team, or surfing out in Maui, he seems to make it all look so simple. Yet, that is his key to success. Simplicity.

Brandon’s keynote speech from BPCon 2019 touches on many things, including how to simplify your business so it’s working for you, how to grow a team you trust, working with your strengths, and becoming the superhero in your own story. It also includes glimpses into Brandon’s everyday life. From hair styles, to how to ask out your crush, and even saving naked swimmers on Maui beaches.

Regardless of where you’re at in the journey, every successful business owner (whether real estate or not) has to make a big business into something simple and seamless, and that’s what you’ll learn from Brandon’s keynote speech.

Brandon:
This is the BiggerPockets podcast show 484.

Intro:
You’re listening to BiggerPockets Radio, simplifying real estate for investors, large and small. If you’re here looking to learn about real estate investing without all the hype, you’re in the right place. Stay tuned. And be sure to join the millions of others who have benefited from biggerpockets.com, your home for real estate investing online.

David:
What is up, man? We are talking some real estate today.

Brandon:
Yeah. BP Con 2019, because we didn’t have a 2020 because of the whole COVID mess. BP Con 2019, I gave a keynote speech on how to simplify your business and how to make it more simple so it’s more fun and more profitable and you have to work less and make a lot more money. That’s the summary of the keynote speech. And we decided, we’ve never actually played it for the entire audience before, only the people that were there live in Nashville got to hear it. So today’s episode is actually my keynote speech from BP Con 2019, and I think you’re going to it. So that’s what’s coming up here in just a moment. But since David, you’re not joining me for the whole show today, let me just ask you, do you know what you’re speaking on yet at BP Con 2021?

David:
I believe I’m slated to talk about the BRRRR Method.

Brandon:
Of course, you are.

Brandon:
Because you are the BRRRRminator.

David:
That’s about it.

David:
To be fair though, you and I will be talking to everybody the entire time about everything related to real estate at all.

David:
I may set something up where we have a private meeting or rent out a room or something to have people come and mastermind or do that kind of thing.

Brandon:
Something fun that, it can be fun. I this idea. I’m doing one of those with my investors in Open Door Capital, we had a little private to dinner. That’ll be fine if on her drinks or something. I don’t, we got to plan out still. But that leads actually to today’s quick tip.

Brandon:
Quick tip is BiggerPockets conference 2021 is happening. So you probably guessed because we just talked about it. It is happening, it is a New Orleans and it is on October 4th through the sixth. So October four, five and six of 2021. So the quick tip is, if it’s not sold out yet, it is going to sell out. 250,000 people listen to the show and we are only having 1500 spots.
So it’s going to sell out, but if it hasn’t sold out yet, go get your ticket right now, biggerpockets.com/conference, easy to get there, biggerpockets.com/conference, get your ticket, it’s going to be amazing, it’s going to be tons of speakers, inspirational keynotes.I think Hal Elrod is going to be there, author of Miracle Morning and a bunch of other people. And it’s in New Orleans, one of my favorite cities in the entire world, right off Bourbon Street, which, if you’ve been there, you know what you know. It’s going to be amazing.
So we’ll see you there. We’re also going to do a live podcast. I think recording a Q&A thing, and David and I are going to do there as well. So it’s going to be great. I’m excited. I’m excited to meet all of you who are going to be there. So get your ticket, biggerpockets.com/conference. And that leads us to today’s show sponsors. All right. I guess that’s all we got before I jump into the keynote. Anything you want to say, David, about life, real estate, love or whatever you want?

David:
No, I actually want to hear your keynote again because I remember being there and I was in and out of the room. I didn’t get to hear the whole thing.

Brandon:
All right. Well you just didn’t care enough about me. Were you there for the surf lesson?

David:
Part of it.

Brandon:
I gave a surf lesson in the middle of the speech.

David:
Yes, I missed that. I heard.

Brandon:
Okay. All right. Well, everyone be prepared. You’re going to learn how to surf today. And without further ado, let’s get to the keynote from the BiggerPockets 2019 conference by me, Brandon Turner.

Speaker 4:
Okay. Before I leave you, I want to tell a little story because people enjoy the story. A few months ago, I went to a business networking event. Wasn’t a real estate event, had nothing to do with real estate, business related. And I these events because when I go to real estate event, everybody comes up to me and wants to chat about real estate. When I go to these other events, nobody knows who I am. I’m at this event, and this woman beelines towards me and says, oh my God, you’re Jay Scott. And I’ll be honest. I’m introverted, I don’t talking to people that. I don’t know. It’s hard for me. I enjoy it, but it’s difficult.
But I was really excited because I was at this event where normally nobody knows who I am. And she said, oh my God, you’re Jay Scott. And I was really excited. And she said, can I ask you a favor? And I’m sitting here thinking, wow, somebody has a favor for me at a business event. So maybe she’s going to want me to sign a book or maybe she’s going to want me to be godfather to her child or something really awesome. And she looks at me and she said, can I ask you a favor? And I said, absolutely. And she said, will you introduce me to Brandon Turner? That really happened.
I’m not going to lie, I was a little upset. But then I realized that there are a whole lot worse things in this world than introducing Brandon Turner. So I have the honor, the privilege today to introduce Brandon Turner. Somebody that everybody in this room likely knows. He’s the VP of growth for BiggerPockets. He’s taught many of us in this room out various strategies that, I don’t want to say they didn’t exist before Brandon, but they weren’t well conceived before Brandon. He’s created some of the greatest three-letter acronyms and four-letter acronyms in real estate. And he’s had a profound impact on all of our lives. So it is my profound pleasure to introduce our first keynote speaker, Brandon Turner.

David:
I think I forget what a good speaker you are because I get caught up with your face, right?

David:
And then every once in a while when I don’t see your face and I just hear the words, I’m impressed by how well you articulate things.

Brandon:
Thank you. Sometimes you get caught in my triangle as well.

David:
Ooh. Yes. That’s true. Your triangle is a triangle. It’s like the Bermuda Triangle. Once you go there, you never come back out. We don’t know what happened to you.

Brandon:
Hashtag jiu-jitsu jokes. That’s great. They’re like dad jokes, but better. Well, thank you everyone for listening. Hope you enjoyed this. And remember BP Con is happening in October 4th through the 6th of 2021. We want you there. If it’s not filled out yet and it will sell out very shortly, please get your ticket at biggerpockets.com/conference because David and I want to hang out with you live in person and chat some real estate, life, business, love and whatever else you want to talk about. So David, I’ll let you get us out of here.

David:
All right. This is David Greene for Brandon, the keynote speaker, Turner, signing off.

Speaker 1:
You’re listening to BiggerPockets Radio, simplifying real estate for investors, large and small. If you’re here looking to learn about real estate investing without all the hype, you’re in the right place. Be sure to join the millions of others who have benefited from biggerpockets.com, your home for real estate investing online.

Help us reach new listeners on iTunes by leaving us a rating and review! It takes just 30 seconds and instructions can be found here. Thanks! We really appreciate it!

In This Episode We Cover:

Books Mentioned in this Show:

Connect with our Brandon: 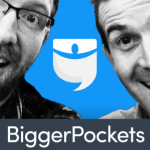 How to Plan for (and CRUSH) Your 2023 Goals
Did High Interest Rates Kill Off House Flippers?
Finance Friday: My Home Renovation Put Me in a HELOC Hole