Love the bathroom transformation! Great work, and thanks for the update!

Tip that I heard (but haven't tried myself yet) in case you still have more grout to do. Normally you would spray a sealant on the tile after grouting (or maybe that's only if it's marble, not sure) -- but if you spray the sealant BEFORE grouting, then the grout won't stick to the tile as much and is easier to wipe off (downside: your dance party doesn't last as long).

@Jake Moran I thought the sealant was more to seal the grout and keep that clean?  Not the tile. Plus give up my dance party!?  I’m not sure if I can handle that kind of sacrifice

@Tim Bradley Yeah, you would still need to seal again after grouting.

Nice work! I have never seen drawers on the bottom of a bathroom vanity before. Is this a new thing or have I been blind for a while? Thanks for sharing your journey and keep on dancing your way through!

Too long, didn’t read – Tim’s usual shenanigans occur, house rents in the end, before and after pics too 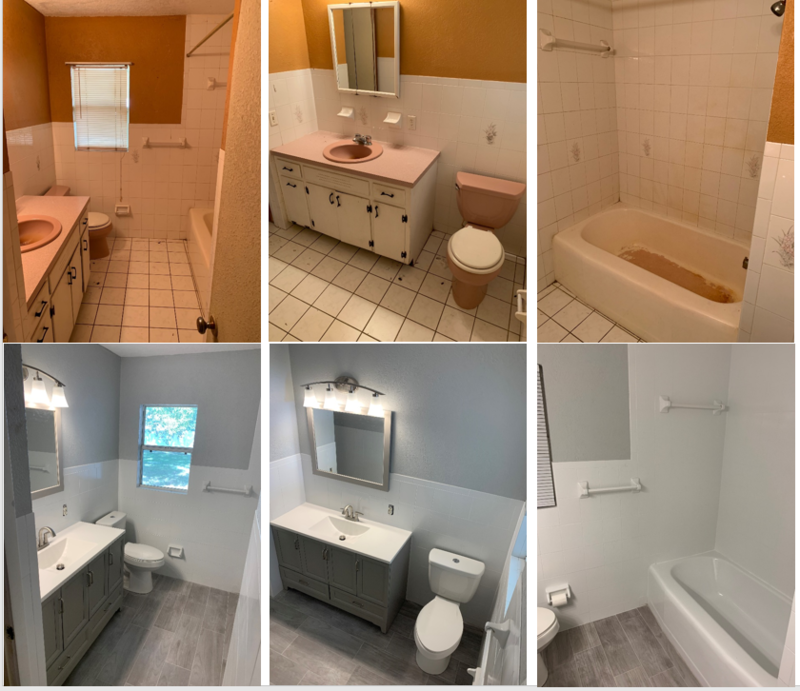 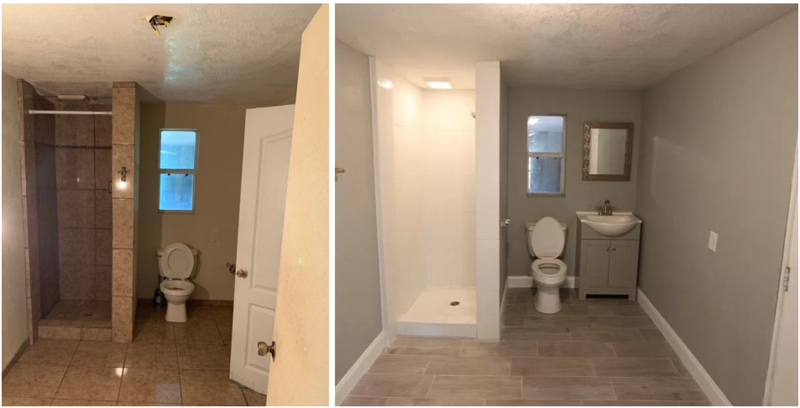 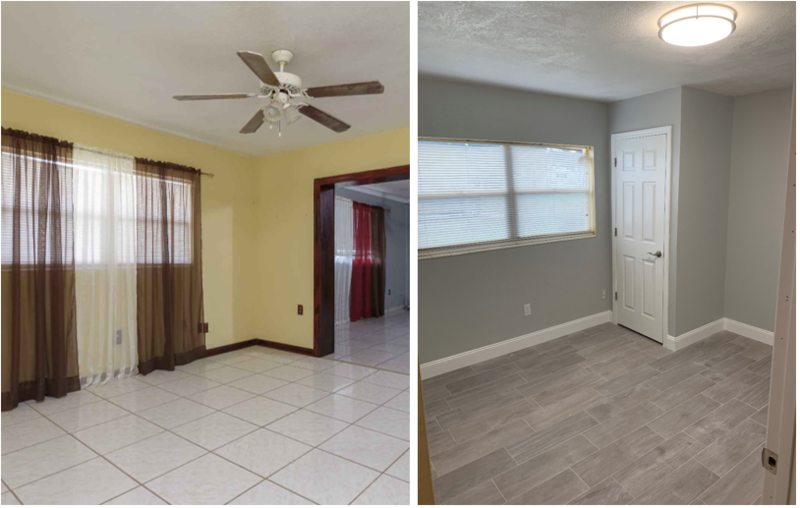 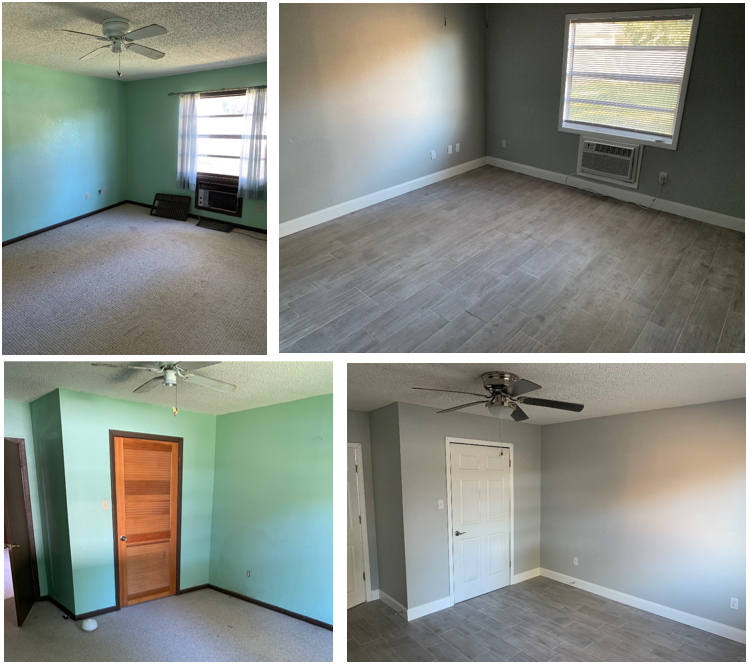 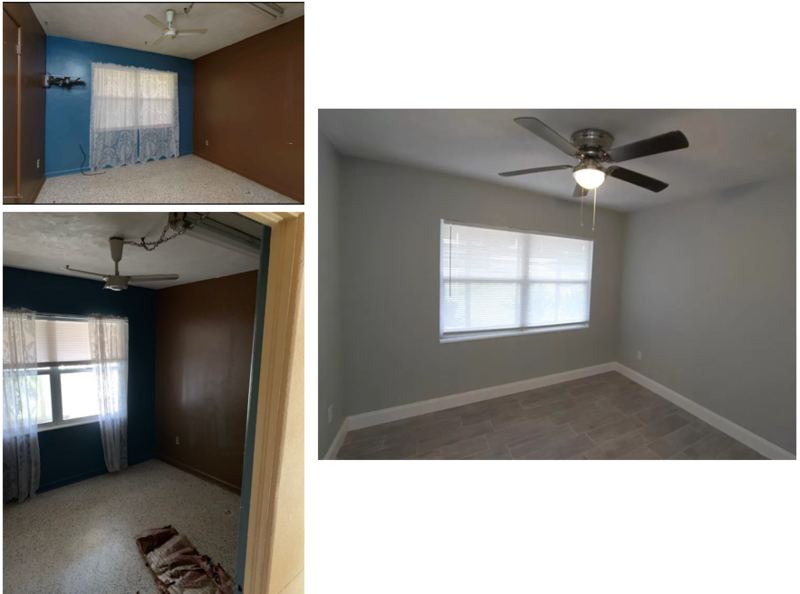 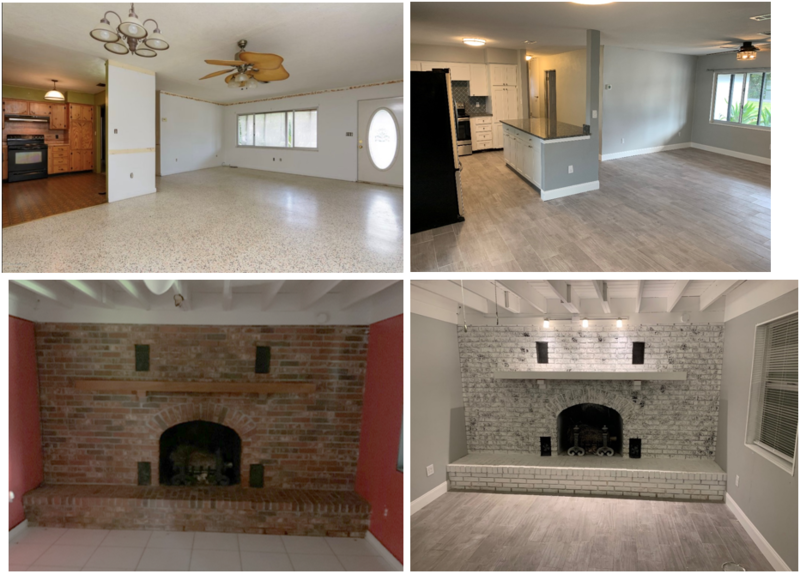 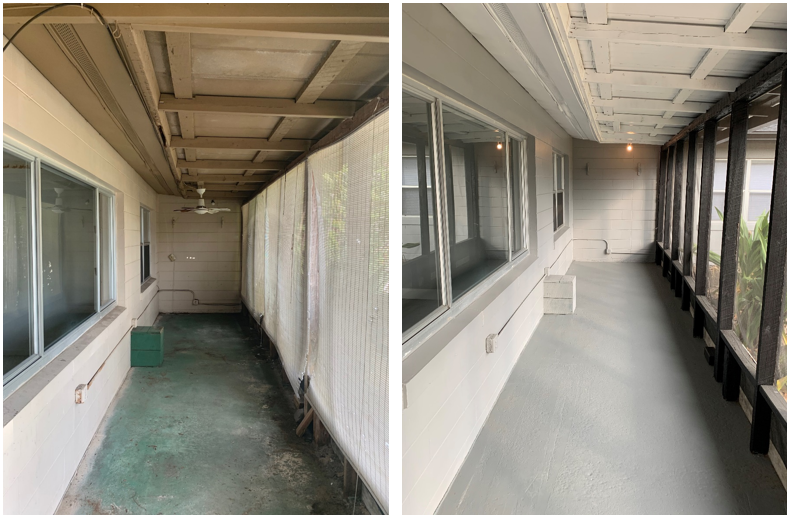 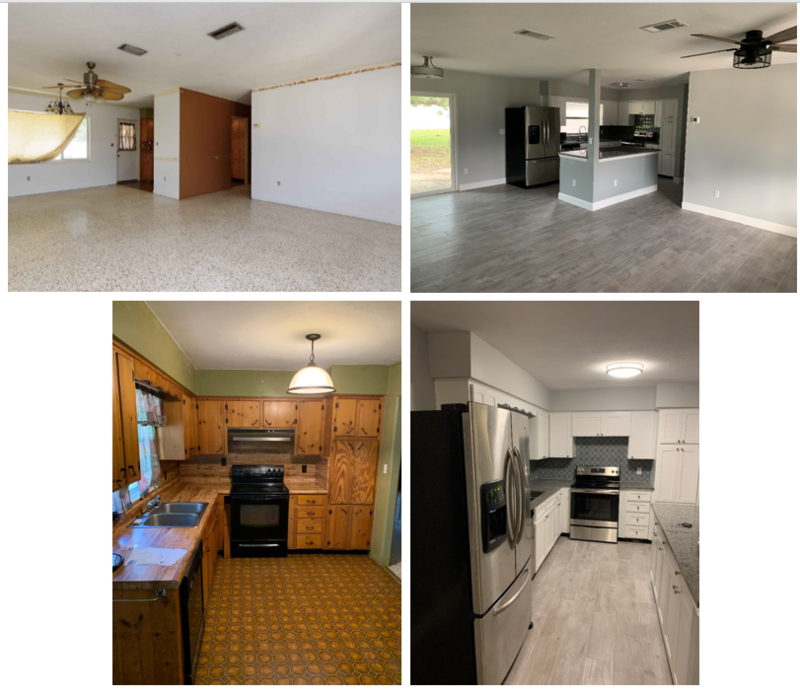 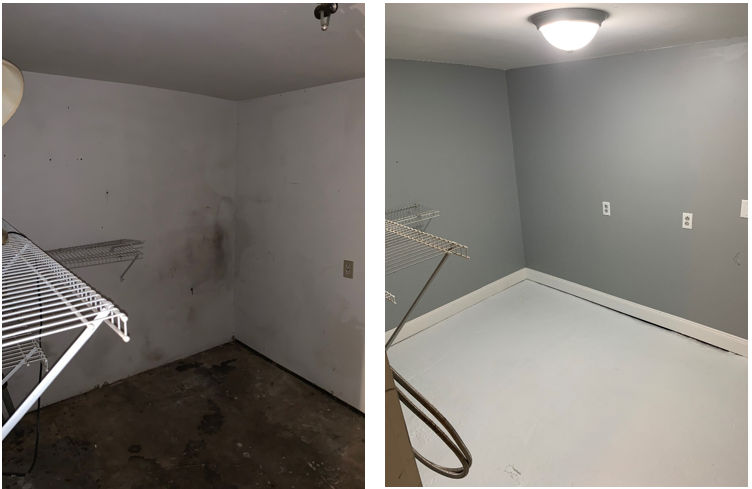 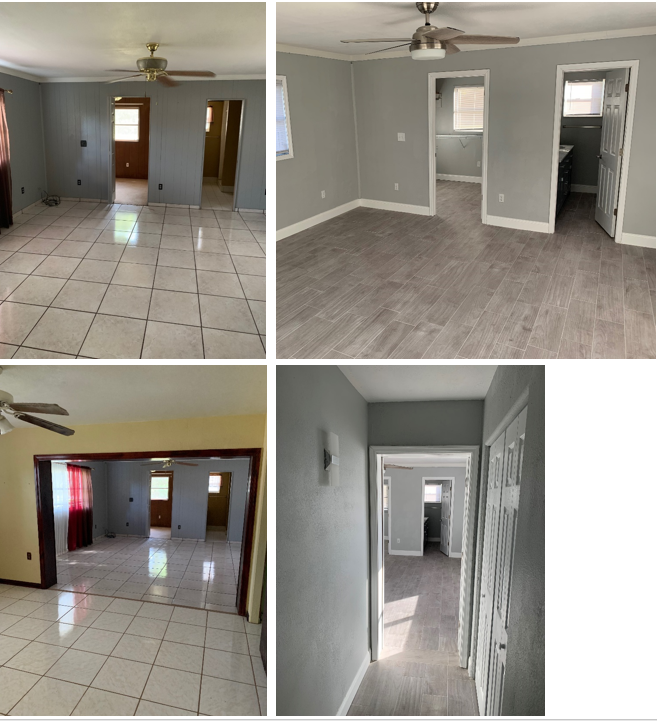 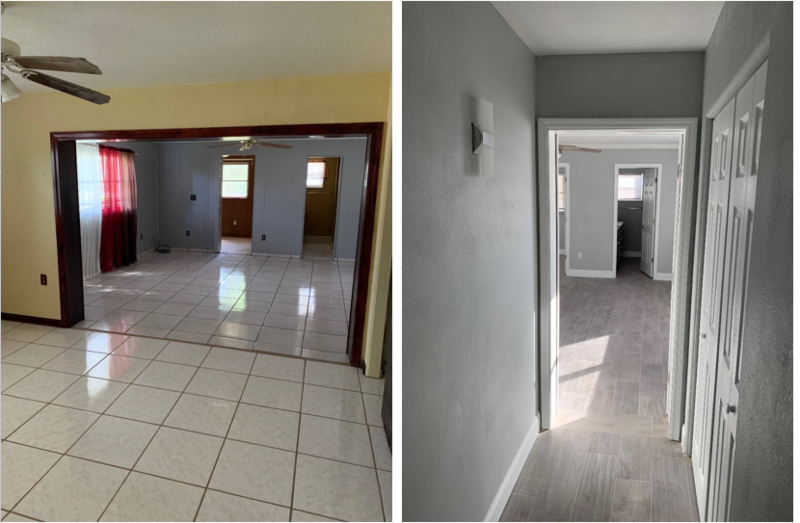 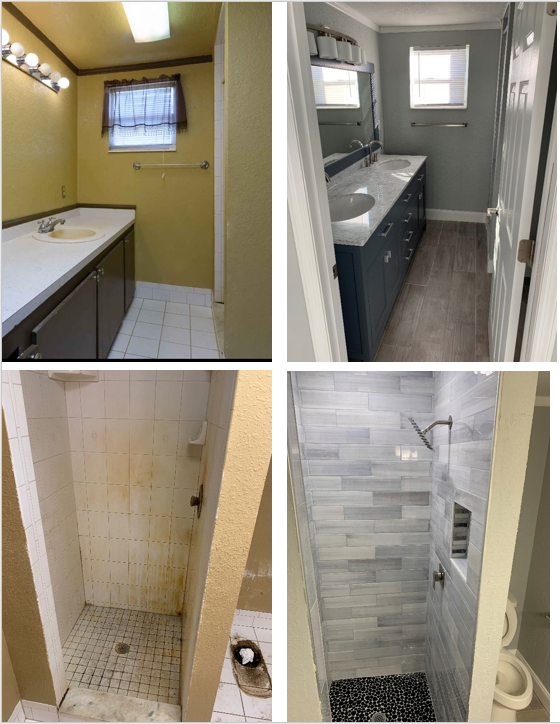 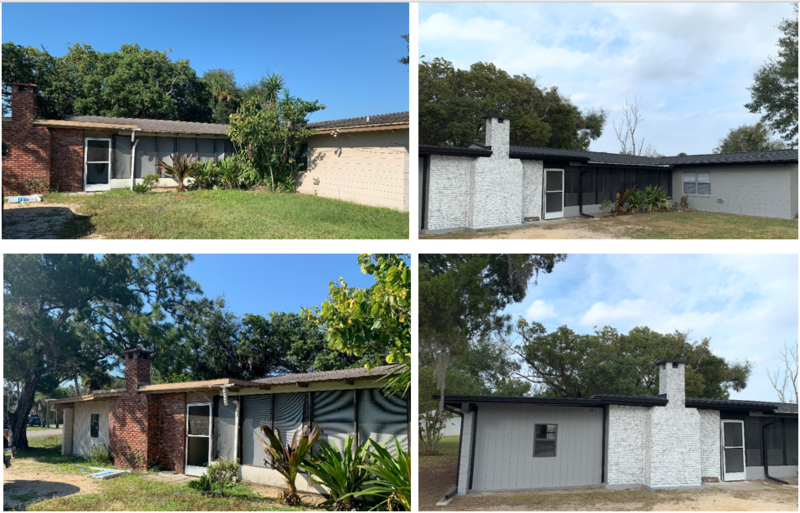 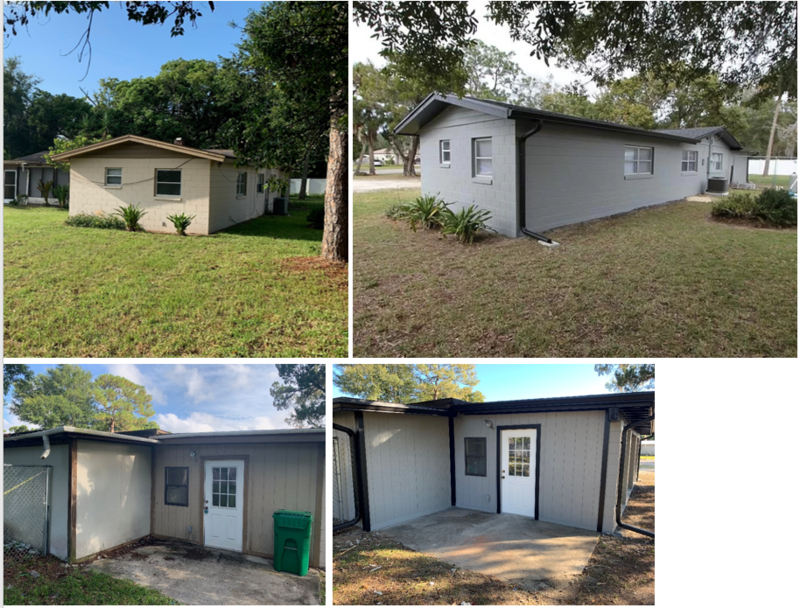 @Aaron Raymond honestly I didnt even notice the bottom drawers.  Just liked the vanity and it was the right price

I'm curious about your first bathroom pic, maybe I am missing it from the photo, but it appears that there is only painted drywall for the tub/shower walls. I would imagine this will be an issue without having tile or some waterproof material. Do you have some waterproofing going on here?

@Joseph Konney There is definitely tile everywhere.  All that white is actually white tile that I had reglazed.  There is tile on all the walls in that shower.  Water damage is not your friend.

Wow! Thank you for the update. I was beginning to wonder what happened! Looks great!

@Joseph Konney There is definitely tile everywhere.  All that white is actually white tile that I had reglazed.  There is tile on all the walls in that shower.  Water damage is not your friend.

Aha, I see you camouflaged the grout lines on me! DIY kit from a big box store?

@Joseph Konney I actually had all the tiles professionally reglazed.  Same with the tub

I’ve decided to become Buddhist. Clearly my faith in the flying spaghetti monster hasn’t worked. I went out to the house yesterday and literally nothing that I had hoped to be fixed was. The electrician was unable to come out and will now be out Friday. So the wires don’t carry the right current and the hot water tank doesn’t make hot water. The septic tank was successfully pumped out. However I have two septic tanks. Can anyone guess if the correct tank was pumped? I mean of course it was the wrong tank! I just laugh at these things now. I gave the company access to the house to see where the issue was but they decided to just guess instead b/c “they don’t like to enter the house.” And why would they. That means they could identify and fix the issue and check their work. What a horrible idea. They will be back out either today or tomorrow to pump the right one and hopefully that clears the blockage in my one bathroom.  So the poo isnt gone and the drains dont drain.  The renters move in on the 19th though so this will all be fixed by then no matter what!

@Tim Bradley congrats and thanks for all the time you put in to sharing.  Can you provide some details on the refi?

@Nicholas L. the refi is currently in work. Closing date is 6 months to the day from original purchase date. Haven't had the appraisal yet and that will tell me my final numbers for the BRRRR. Will post when I get them. This is a traditional loan though at 75%LTV

Tim, buy 3x clean 5gal pales with lids, mix your whisper and look at me greys together. You don’t even have to measure if you’re okay with pouring them between buckets about 5 times or so. Mixer on a drill until even, mix with the one beside, pour half out, mix with the other, repeat x5.

Looks great Tim. Any plans on posting the BRRRR calculator results? Would love to see the numbers on this.

I've learned in dealing with any third party contractor, whether it be on my own house, my day job (IT), or my side bus/limo business to try to always be present when they're there to do any work. I've had too many instances similar to yours where people don't show up when they're supposed to, don't fix the right thing, or don't test their work. I test everything before I allow them to leave, about 30% of the time (by the way did you know 80% of all statistics are made up?) I find something not done right and make them fix before they leave. They hate it but I'm a big fan of a job done right.

I'm fortunate in that my day job allows me to set my own schedule and I can take personal time almost whenever I need, it definitely makes things easier.

@Tim Bradley There is just so much awesome information in this post. Thank you for taking the time to share your story. It is very inspiring regardless of all the roadblocks. The final product looks great!

On a lighter note - I almost stopped reading after I saw that Canes hat! Go Noles! I kid.

Electrical: Ok so electrical is supposed to show up last Friday. I call in the morning to verify they will be there. They say yup, its on the schedule, they will be out, I'll call you later when they are done. I text them around 5 to see whats going on. I immediately get a call from the owner of the company. Lets just say when the owner of the company calls you it's not to tell you things are great, no worries, head on out to happy hour. So I'm talking to the owner. He informs me that not only am I not on the schedule but they had no idea they were supposed to go back out to the house, period. The scheduler / admin apparently was as useful as a one armed man in a clapping contest and she has since been let go. As in within the last 5 hrs since I talked to her. So he apologizes and promises to come out first thing Monday morning. Which he actually did. He also cut me a deal on the bill too which was nice. Amazingly, after only 3 attempts here folks, the electrical is fixed. The hot water tank now has 240V going to it and makes wonderful hot water. Well I am assuming it does as the tenants decided to move in early before I could go back out to the house and verify that the tank now works. But I mean everything else has worked out for me so I'm sure its fine. Right? As of today I have not heard that it doesn’t work though and I'm assuming the tenants are the kind of people who shower at least every other day and would have let me know if they didn’t have hot water.  Now that I am thinking about it if they are the kind of tenants that would not let me know they dont have hot water even better!

Plumbing: here is where things go off the rails, or farther off the rails. So the plumber goes out Friday as well. Still can't clear the line and says he needs to bring the owner of the company out to help him figure out WTF is going on. Now for the people following along at home, remember it’s NOT a good thing when the owner is involved. They come out Monday and decide the house has a THIRD septic tank. What the heck!? A third tank! So I will just empty it and life will be good…. I mean does anyone actually think it would be that simple? Haha, simple. We left simple a long time ago. Anyway no, it’s not that simple. The previous owner poured a pad over the tank access to install a workshop and laundry room. Like I cant even put into words how stupid this is. What was this person thinking? This is some new septic tank system that never requires access or pump out? Bafjdklsa;f jdksla fsd!!!! I remember this little voice in my head when I walked that bathroom in the very beginning saying hmmmmmm, that’s weird that they would completely remove the vanity from this bathroom and run a separate drain for the washing machine in addition to the in wall drain. But then I said to myself self, calm down, I'm sure its nothing. NOTHING I said. Haha. So, back from the squirrel tangent. The fix is to jackhammer the laundry room floor, run a line to the other septic tank and re-cement the floor. The only good news in all of this is that they are going to jackhammer a barren cement floor and not rip up any newly installed tile. This will of course cost a fortune and totally screw up my money left in the deal. But the vodka in me says it's ok and to just relax, which is what I am doing. As of now the job isn’t scheduled but the plumber has the go ahead. I'm just waiting for them to tell me the start date. So more to come!

@Richard A. appraisal comes back this friday. Ill do the final BRRRR numbers then. I was looking good up until the plumbing fiasco.