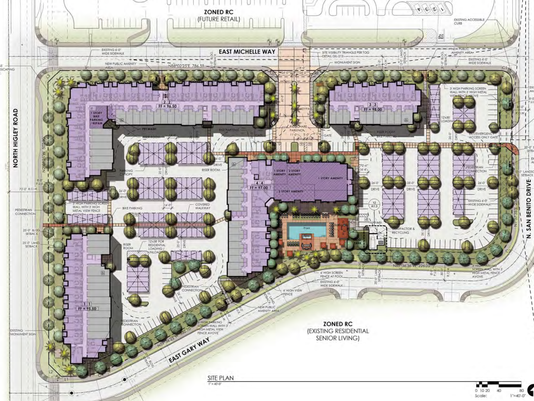 “Gilbert, often central to feverish development in metro Phoenix, is in the midst of a months-long debate over a 249-unit apartment complex planned for the northeast part of town, with a decision quickly looming.

Those living in the neighborhoods around Higley and Baseline roads, the intersection near where the complex is planned, are mounting a campaign against it.

They've showed up to speak at multiple town meetings, swaying Gilbert's Planning Commission in April to vote against a conditional-use permit for City Gate Apartments.

However, Gilbert's Town Council overturned the commission's decision in May with a 4-3 vote, allowing the project to continue.”

If there’s one thing I’ve noticed in my many years of real estate, it’s that small towns like to remain small.

Back in 1980 when the population was a mere 5,717 people, Gilbert certainly qualified to call itself a town. But now that the population has exploded to nearly 250,000 as regular top fastest growing municipality in the United States it might be time to start calling yourself a city.

And start allowing large commercial apartment complexes like most cities do.

Here are a look at some of the quotes and protest from people leading the charge against the development project – quoted from Arizona Republic:

"(The complex) really doesn't fit the character of Gilbert at all," Stephen Biggs, one of the neighbors leading the charge against the project, told The Arizona Republic. "You don't see very many apartment complexes in Gilbert that dense, period. The apartment complex does not integrate well."

Another man cited a study about violent crime increasing with higher density populations. One woman said she thought Gilbert was turning into Los Angeles.

***Gilbert, with 237,133 residents, is a fraction of the size of Los Angeles, the nation's second-largest city with nearly 4 million people.”

So overall, the two main concerns seem to be (1) the increase of crime from increased housing density and increased population, and (2) the complex not fitting in with the “character” of Gilbert, whatever that means.

What’s Bringing Everyone To Gilbert?

You may wonder how an area like Gilbert has increased its population nearly 50-fold in the past 40 years. Let’s take a look at some of the main accolades the town has received:

According to FBI records, Gilbert was the largest town in the United States with zero murders in 2005, 2007, and 2014. (https://en.wikipedia.org/wiki/Gilbert,_Arizona)

Wallethub named Gilbert the #5 safest city in America in 2017 (https://wallethub.com/edu/safest-cities-in-america/41926/#main-findings)

FBI’s Uniform Crime Report and showed Gilbert to be the #2 Safest Town In America for Its Size (http://ktar.com/story/692384/gilbert-arizona-one-of-the-top-10-safest-cities/)

Gilbert boasts a nationally ranked K-12 education system including public schools, unique magnet and charter schools, with an average graduation rate of 90%. Nearly 40% of Gilbert residents hold a bachelor’s degree or higher and the median household income is $80,080. (https://www.gilbertaz.gov/about-us)

Here’s a short list of other accolades the city has been awarded:

All these and more can be found here: https://www.gilbertaz.gov/about-us/team-gilbert/awards-accolades 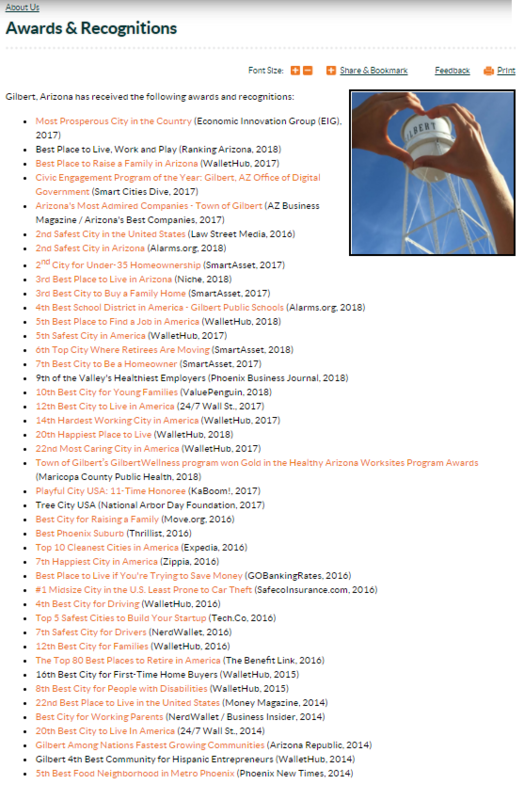 Here’s the thing about living in the internet age… nothing stays a secret for long.

Especially a place to live that has won all of the awards and recognition seen above.

And double especially when you throw in “millennial crack” like great restaurants, cool breweries, and live music. Just search the hashtag “#downtowngilbert” and you'll immediately feel the hipster vibes flowing through your iPhone. 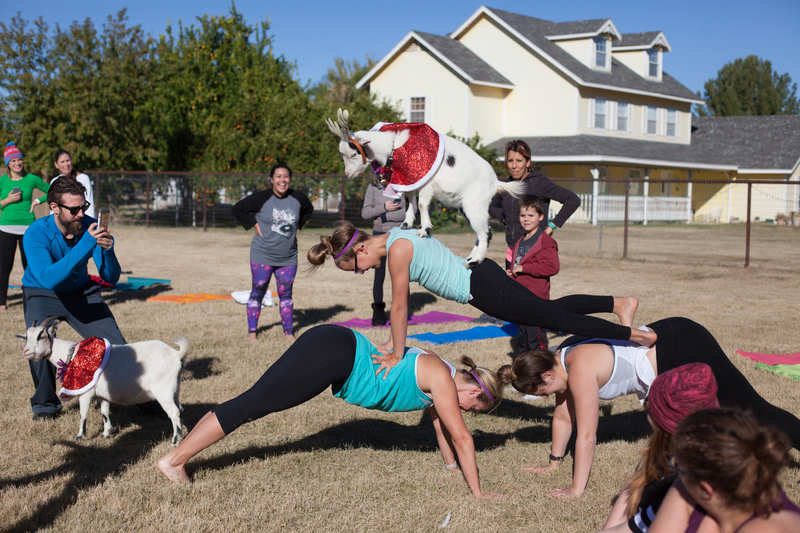 Want proof? Just take a look at Niche.com’s list of best places to live in Arizona and count the reviews for each city:

Plus the city, err… I mean town’s PR department is doing frickin’ WONDERS for promoting the area to outsiders. Just watch their “Digital State of The Town” video on YouTube: https://www.youtube.com/watch?v=ohKk7xQskfw

While other municipalities are stuck in 1990 showing you videos of town hall meeting that look like they belong on C-SPAN, Gilbert has hired a ridiculously talented production team to help promote the town online (you know, where Millennials are looking!)

The Growing Pains of Population Growth

So, now that you know why Gilbert is growing and who the people are growing it, it’s time to consider that with all this growth comes some growing pains…

Yes, we are in the middle of a desert here in Arizona. But there’s only so much land in the city limits before you have to start building up and stop building out. Whether you're in Mesa, Phoenix, Scottsdale, Tempe, etc. It's all the same. Either build on the far edge of town or start building up.

And with that fact comes the addition of four story apartment complexes like the one raising all the fuss recently.

But, there are some downsides… More noise. More traffic. And more high density housing (if that’s a bad thing?)

The word “town” certainly conjures up an image of a place where “everybody knows your name” and you can count on your neighbors to be kind to one another.

But with Gilbert’s population swelling to city sizes (330,000 projected in the next decade) and the town’s 100 year anniversary in 2020, perhaps it’s time for the community to consider a title change from city to town.

And maybe a change of attitude regarding big city features like apartment complexes too.

Any Gilbert residents out there? What's the word on the street? What are you hearing people say about this development?

Gilbert is large, but it is still a suburb. I completely understand their desire to limit the density and style of housing.

They have one of the most desirable suburbs because of the way it is currently developed. Changing that to allow higher density could indeed have a negative effect on crime and property values.

It's tough living in Gilbert now days! We moved here about 10 years ago and it still had a small town feel. We bought our current house almost 5 years ago - before most of the newer apartment complexes came into town. Now there are even more apartments and it feel like so many sketchy people have moved into town. The soul of the town is changing, which is sad. It no longer has a townish feel. It feels more like Scottsdale or other parts of the metro. Just sad!