Example of a Tax Lien Payoff - Here Are The Results

A few years ago I bought several real estate tax liens in northern Arizona on residential
vacant land. I'm earning 16% (gross) interest on them. One of those liens paid off in October and I thought I would give the breakdown of actual interest earned to show the
details of how liens work when redeemed (paid off) after a few years.

Since every state/county is different in terms of how tax liens are handled, it's
important to note a few things about this county in Arizona. There is a 3 year
redemption period. The owner of the property has three years from the date of the lien
being sold to pay back the taxes plus the interest.

If the owner doesn't pay in the first year, the lien holder has first right to pay the
next year taxes and keep the lien position. These are called "Subsequent Taxes" or "Sub-
taxes" for short. So each year you (the investor) need to pay the new taxes. It is
considered a separate lien. You earn the same percentage rate at which you won the lien.
For example, if you won the original lien in the auction at 9%, then you would earn 9% on
the subsequent taxes you pay as well.

You have 10 years to foreclose on a lien. The 10 years is based on the date of the
lien. If you have paid the taxes for 10 years, and do not start foreclosure on the oldest
lien, then that lien is void and you do not get any of your principal or interest earned
on that lien.

There is a fee on which you do NOT earn interest. When you buy the original lien there
is a non-refundable $10 fee. That impacts your return, and thus, the Internal Rate of
Return (IRR) is not 16%. Plus, the first year is not a full 12 months of interest. And
depending on when it's redeemed by the owner, the last year is not likely a full year.

The lien starts accruing interest the first day of the next month after the auction.
Arizona liens are sold in February, so you start accruing interest on March 1st. And
yes, that means if the owner pays the back taxes before the end of February, you get no
interest and are out the $10 non-refundable fee - but you do get your Principal back. The
interest accrues on the first day of each subsequent month. If the owner pays on the 1st
day of any month, they have to pay the full amount of interest for that month.

With that, here is a breakdown of the interest earned on this lien.  (Click on picture to see larger version) Note - "P1" is January, "P2" is February, etc. 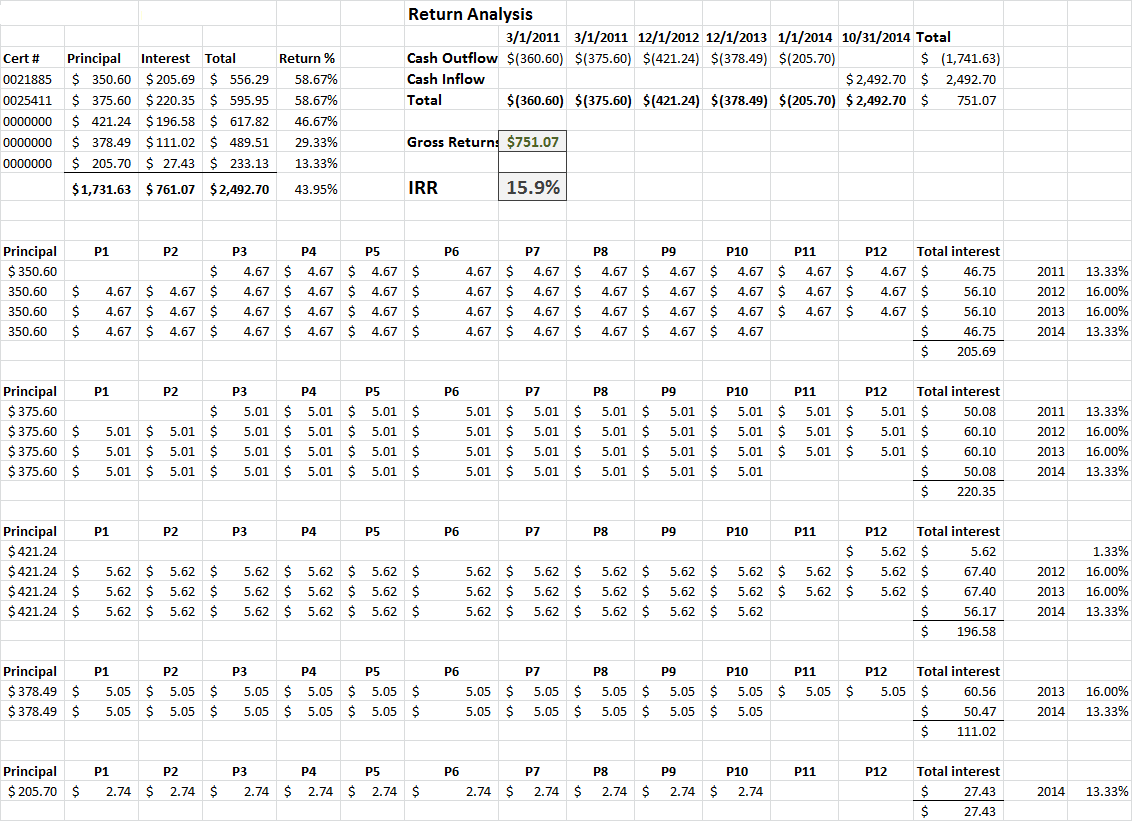 The upper left is each lien year and how much interest I earned on that particular year.
For example, the first year lien is $350.60 of Principal. I earned 44 months of interest
on that year's lien or $205.69 in interest.

I should point out that when I bought this lien, it was for 2 years of taxes. So the
second lien amount of $375.60, I also earned 44 months of interest or $220.35 of
interest.  Also note the Cash Inflow is the sum of all the Interest earned and the Principal paid back. You don't get paid any Interest until the lien is redeemed by the property owner.

The Return % is a gross return on that lien amount. Under "Rate Analysis", the Internal
Rate of Return is using Excel's formula. I used Ankit Duggal's Tax Lien IRR spreadsheet in
the BP Resources > FilePlace > Spreadsheets. Note the first year outflow is $360.60
because it includes the $10 fee the county charges in the original auction. Interest is
NOT earned on that $10 fee.

So while my gross return is almost 44% in total, the IRR shows a healthy 15.9% return for
the overall time period of the investment. I have 9 more of these liens still earning a gross 16% annually.