Hello everyone, this is my first post in any forum ever so bare with me. My name is Coty Dolan I am a Realtor in Pebble Beach, CA. I am 29 and just starting out in both my career as a realtor and as an investor.

I am really focusing on investing in the Greater Las Vegas area mainly Henderson.

My question is if anyone know the biggest problems encountered with Multi-family complex’s and apartments in the Henderson area?

Thank you so much for any knowledge and or advice

I have not invested in that area but I just recently noticed there was a property for sale near there on the IRS website. I am looking to invest in San Diego myself.

My home is in Henderson and it's always been a great area for families. Recently lots of new residential and business construction have started and its driving up already high home prices even higher. It might be a tough market to get into initially because you may use up a significant amount of cash to buy an overpriced property and it may not cashflow what you need. In the long term, it should pay off as it's an attractive area just run your numbers very carefully. Best wishes!

I can think of one issue you are going to run into when buying multis in Henderson and that is...there aren't any. Unless you are talking about something bigger than a 4 plex. For 4 and under, they are very rare to find for sale in Henderson and the overall 2-4plex market in Las Vegas is not all that good. 5-6% ROI and they are exclusively in the less desirable neighborhoods. I'm not sure why they don't build them anymore here but if you look on the MLS right now, the newest 2-4 plex currently on the market was built in 1995. Most are built in the 60s-80s. (23 of the 78 currently on the market are pre 1960.) Any part of town less than 20 years old will not have this type of property available. Less desirable neighborhoods = less desirable tenants, higher turn over, increased maintenance expenses....The list goes on and on.

@Coty Dolan , to @Brad Bellstedt point, the number of multi-families in Henderson, NV is limited.

If we take a look at data from the most recent American Community Survey we can see just how small the numbers are. 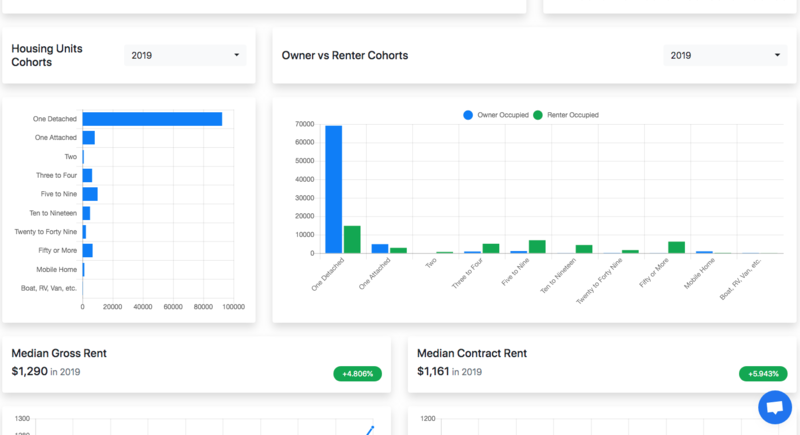 The chart in the top left corner shows the counts of units tabulated by number of units in the structure.

As you can see, the overwhelming majority of units are classified as single family detaches homes.

Duplexes account for only 838 of the 133,080 units in Henderson, NV. Meaning that there are only about 400 duplexes in the entire city.

Tri and quad-plexes are a bit more numerous with 6,326 units being reported, putting the estimated number of this class of real estate at roughly 1,800 buildings.

@Art Perkitny thank you very much