These are in neighborhoods that the landlords had no choice if the "homeless villages" were put in. The homeless can not be kicked out of the "homeless" villages for drug use or prostitution.

"Despite spending in Seattle and King County that has ballooned to $200 million a year,

the number of people living in tents, on Seattle streets and in vehicles

So far, Seattle has seven permitted tiny house villages, though officials reportedly expect that number to increase by the end of the year." 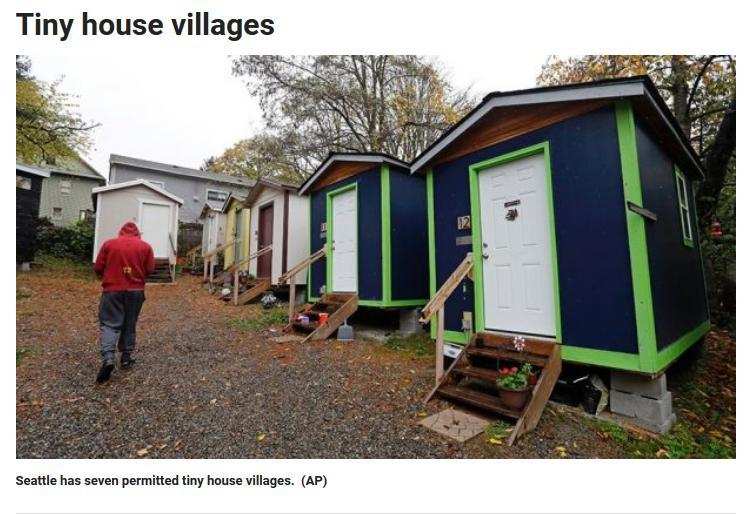 "Each night, the villages provide more than 300 people a tiny house structure that locks, access to restrooms and showers, case management, a kitchen and a managed community," the city explains on its website. 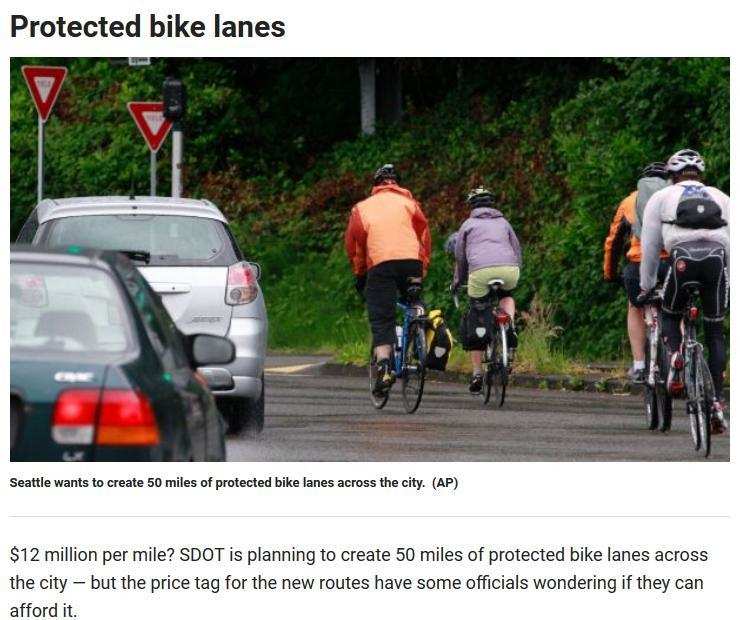 "$12 million per mile? SDOT is planning to create 50 miles of "protected" bike lanes across the city" ???

What about traffic? Bikers seem not to know that a 2,000 pound car is heavier than a 185 pound biker. The car always wins. I've driven in Seattle many times and the roads are narrow, twisty, hilly and wet and the "sun" goes down by 4:00pm in the winter. Ok, saying "sun" in the winter is an exaggeration, in Seattle it is "grey overcast light".

Hmm --  I live within about 1 mile of one tiny house village in seattle.    I have mixed feelings about them as do many seattlites,  but generally speaking they are more organized and better managed than the currently available alternative  (tents,  broken down RV or cars,  or piles of cardboard)   ---   I'd trade a larger tiny house village  for an equal reduction in the number of "unsanctioned" campers in an equal radius of my home  (and investments)  any day.

That said,   I do disagree with the "low barrier" ones (which allow drug use/etc).  Not all of the villages are low barrier,  and the ones that are of course cause more problems in the surrounding neighborhood.   There has got to be some requirement of accepting help and working to solve problems whatever they are in exchange for the help,  and those who won't take the trade should move along and accept consequences for any illegal activity until they see fit to change their minds.

What I don't get is that the city has a lot of surplus land -- and a lot of people with a lot of great ideas to quickly build a class of housing someplace between a glorified garden shed and a 200-300K or more per unit "affordable" housing complex.    If they could get out of their own way of their own regulation or reduce them for developers and charities to be able to build housing from say shipping containers,  or in older commercial buildings without having to do a full upgrade to modern standards.    A run down office building converted to bunk rooms has got to be better than a muddy tent city in the middle of the I-5/I-90 interchange.

And unrelated to investing,  I assure prior poster that anybody who is a regular bicyclist is very aware of who will win in a bike/car collision.   Recent news around here includes a cyclist obeying all laws in the bike lane run over by a 5 time drunk driver.    I don't support $12m/mile for any kind of bike lane,   but long term planning of road infrastructure for more than just cars is a good goal.