If you’re considered getting into Multifamily investing (or already do and want a good war story), and are reading all of the books and listening to all of the podcasts to prepare for every possible scenario, then you NEED to read this article, because it literally has almost everything you could run into. We’ll go into all the nitty gritty details and war stories (including a gas line excavation scare, crazy neighbor issues, city politics and a bamboo forest nightmare, to boot) so that it hopefully helps you prepare for your first or next MF deal.

In one of our first multifamily acquisitions for Akras Capital, we encountered nearly every situation you could imagine - but we learned so so much and now we want to share it with YOU…In this article about this 5 unit acquisition we’ll cover:

The overall quantitative summary of the investment

We started Akras Capital in 2017 to acquire multifamily properties and focused on Spokane, the second largest city in the state of Washington. Based in Boulder, CO and Boston, MA, we began searching for value-add markets. After analyzing nationwide trends, we saw people moving inland from the coastal cities. Specifically, we saw “in-migration happening” from Seattle, Portland and San Francisco (where life is congested and expensive) to inland cities like Spokane, where there is a high quality of life and low cost of living. In these markets, competition to acquire MF assets is high.

We got an edge on the market, and generated deal flow, by building relationships with local wholesalers who traditionally focused on single families, but were starting to see multifamily deals as well. After doing some online research and flexing our personal networks, we met with several locally and built relationships. We educated them about what types of MF assets we were seeking and established our credibility and ability to close quickly. They then began bringing us off-market deals, which included the one we’re featuring today.

The Takeaway? If you are just getting started in a market, be sure to connect with wholesalers who specialize in off-market deals, build a relationship and educate them on your buy criteria.

What Was The Asset and Opportunity? 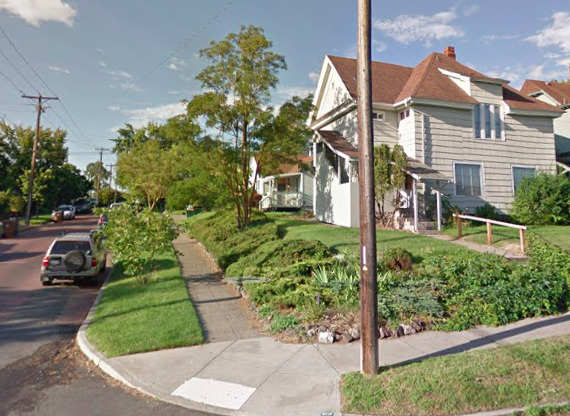 [The 4-Unit multifamily in the front, and the single family peeking out with the red roof behind]

It was a 1900 vintage 4-unit building that included a single family home on an adjacent parcel, which was being used as a fifth unit. It was located in one of the most desirable neighborhoods in Spokane, WA, close to downtown employers, parks and a small historic district with shops and restaurants. This was a solid A location, and multi-families in this area were extremely hard to buy due to competition. This was the foundation for the investment and allowed for an early exit and high ROI.

When originally analyzing the deal, we couldn't quite make the numbers work at the offer price. However, upon further due diligence we realized that the (2) buildings were actually on (2) separate parcels of land, they had just never been split from each other and always sold together. We realized that we could treat the single family home as a fix and flip and keep the 4-unit for long term cash flow. After further analysis, we realized this was an undiscovered opportunity and we continued to dig in an create our business plan with this unique fix and flip component.

With the 4-unit we saw an opportunity to remodel 2 of the units and bring the rents up to market value. One unit had already been nicely remodeled and the other was already fetching close to market rent. With the significant increase in rents from the remodeled units we planned to BRRRR the property, pull out our original investment, and hold it long term generating an infinite Cash on cash return.

The single family home had a lot of potential but needed a complete gut remodel. However, given the desirable location and hot real estate market we figured it would make the perfect investment for a flip. This would also help us to get paid back some our capital in the deal before the BRRRR was completed.

The takeaway? Buy in solid A and B class locations, without compromise, if you want to assure an easy exit and high ROI.

Additionally, get creative when looking at the deal and explore unconventional ways to force appreciation and create equity. Look for additional units in basements, attics, garages and development opportunities on un-utilized land.

How We Closed: Seller Financing

Working with the wholesaler provided some other advantages, including understanding all of the motivations and needs of the seller, since they had a direct relationship (unlike when you have 2 brokers communicating). This resulted in us being able to negotiate easily and close the deal with Seller financing.

We could buy the property for $310K with a low $5K down plus the wholesaler's fee of $38K, without getting a bank involved. The seller agreed to carry the mortgage on the property for 12 months at 0% interest, which we worked hard to negotiate. These 10 months gave us the time needed to get the units remodeled, rents increased and then complete a refinance with a local bank given the appreciation we had forced.

The Takeaway? Work with deal providers who can learn the true motivations of the sellers and see if there are seller financing options. Often sellers don’t consider this as an option, and it can be beneficial to both parties, especially when time is a factor.

Running the Business Plan: Stabilization of the Multifamily, Flipping the Single Family and Re-Financing Everything for Infinite CoC return

After closing, we got to work quickly with our strong on-the-ground contracting team and property managers. What did we do? 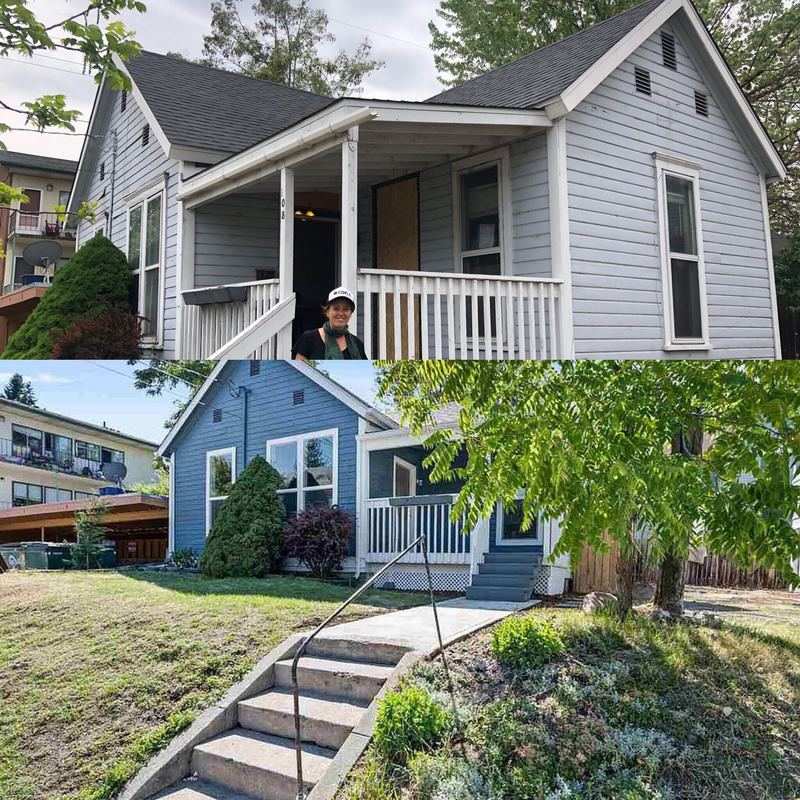 [Before and after with Single Family Fix/Flip exterior] 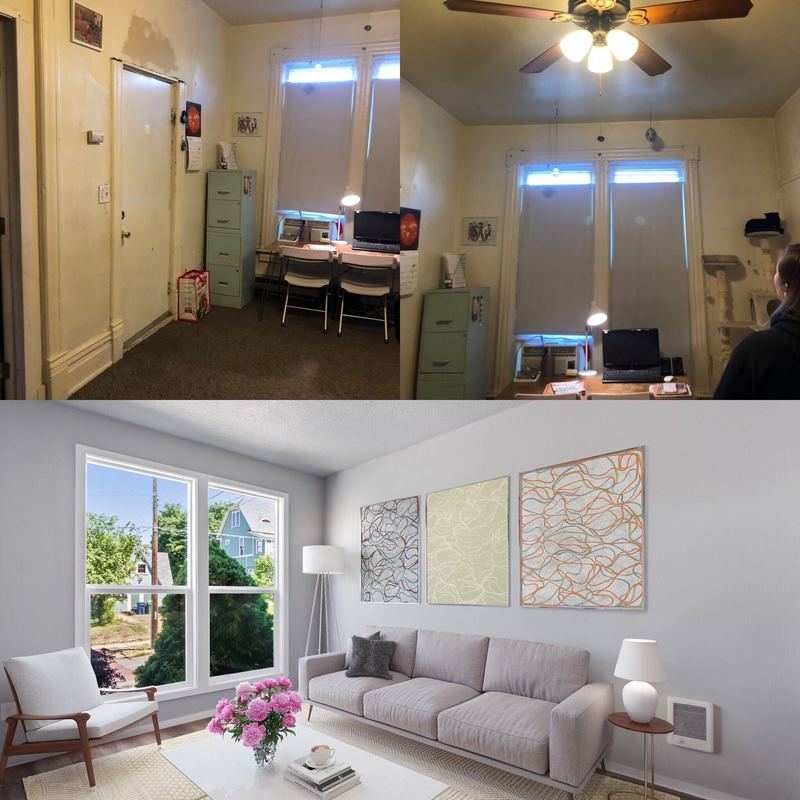 [Before and after with Single Family Fix/Flip interior]

Gas Line Explosion Scare, Water Main Replacement and City Politics. In order to fully separate the single family parcel from the 4 unit, it needed its own sewer and water lines, which required a significant excavation of the yard and a new tap into the city main and sewer system. Initially, the city wouldn’t grant the permits unless we paid for a total replacement and upgrade to the city water main along the whole street - easily $100K and months of effort - a deal killer. We avoided this (and barely had to get involved with it) because our contractor had deep relationships with the city, and was able to help them come to their senses and make an exception for us. Additionally, while the excavation was being completed, the team hit an old unmarked gas line that didn’t show up in the discovery work before the dig. Three fire trucks and two dozen firemen arrived at the scene and evacuated half the block, and thankfully nobody was hurt, as no fire started. We didn’t even hear about the issue until the next afternoon, since our contractor was so dialed in to our project. 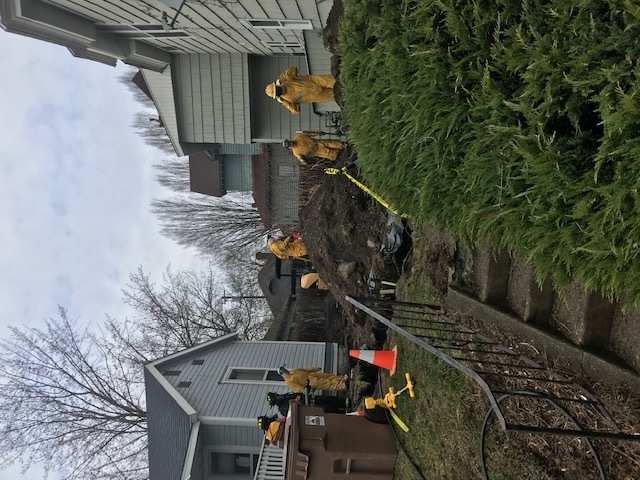 Property Management. We put a new property manager in place and hired a landscaping and exteriors team to keep an eye on the property. Halfway through the deal, we ended up switching out the property manager we initially hired since they had overextended themselves during a growth phase and had difficulty leasing up units in their portfolio, including ours. We went with a more experienced, systems-driven team with 5x the number of units under management relative to our first team.

Unit Renovations. We renovated 2 of the units including bathroom remodels, and brought them up to a “classic plus” finish - the rents and market wouldn’t support high end finishes like new appliances and granite countertops. 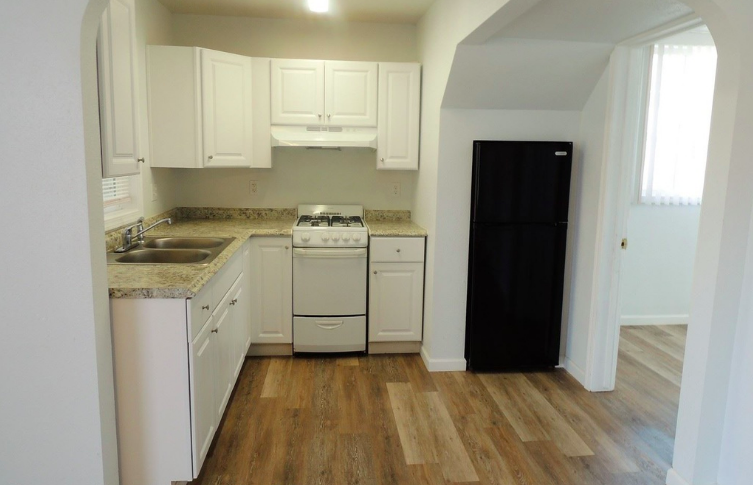 [Unit interior in the multifamily]

Exterior and Landscaping Renovations. We cleaned up the landscaping, removing a bamboo forest on the side yard. 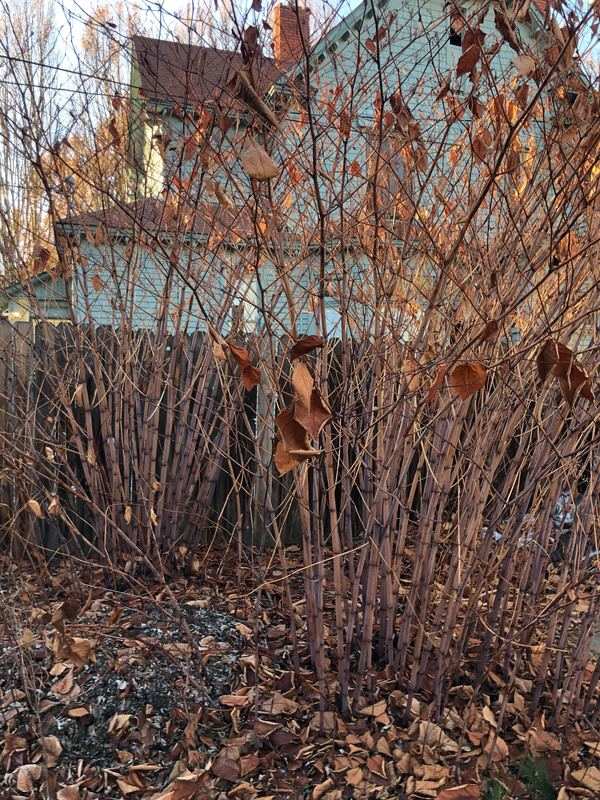 Lease Up w/Higher Rents. We re-leased 3 of the units at higher rent, and waited for the last tenant's lower rent lease to expire. She didn't re-sign, so we leased up that unit at higher rent as well. We increased rents on this property from $2195 to $3325

This all took several months, but by the spring the single family was on the market and sold for a high price, enjoying several offers.

After a total of 9 months we re-financed the property with a local credit union, fixing the new higher value with an appraisal. With this money we paid back our initial investment and then paid off the seller's original note, taking all of our money out of the deal. At this point we had reached an infinite cash-on-cash return!

The Takeaway? Your boots on the ground make or break deals. Build a super strong on-the-ground team of property managers and contractors that have experience and connections with city government so that they can handle emergencies and cut through red tape. Do this long before you start looking at deals, and they can help you to explore for opportunity.

Seeing An Opportunity for Early Exit

Fast forward 18 months after close. The property is humming along, cash flowing decently, and appreciated in value. While this was our initial goal, our company’s overall focus had shifted to acquiring much larger multifamily assets 75+units in inland growth markets bigger than Spokane. We had learned that asset managing a large property was only a little more effort than a small multifamily, and has much higher returns. This is mostly because with larger properties you can gain more economies of scale and efficiencies from having onsite leasing offices, more streamlined operations with all of your units under one roof. During this period we had subsequently acquired a 324-unit in Orlando and an 111-unit in Dallas and affirmed this is all true.

Given the attractive market conditions for sellers right now, we decided to list our Washington portfolio (including the 4-unit), in an effort to capitalize on all of the gains we realized from the appreciation we forced over the last couple of years. We can then take this capital and then re-deploy it into larger assets. We listed the 4-unit at $425K with a local CRE-focused brokerage firm. Within 48 hours we had received several offers at and above our asking price.

Overall, How did the numbers break down?

Overall, what did we learn, and take into our next deals?

Good luck with your first or next multifamily deal, and we hope this article helped you out in some way!

Great feed! I am a beginner searching for my first Multifamily property. Because of finances, I decided to House Hack using FHA as my strategy. I will try to go as big as possible since I don't know how long it will take to fund my next property.

This was a very well written post. I love MF and it is quite a different beast from SFR. I think this post will help give a ton of new investors a good foundation for the dive into MF investing.

@Charlie Stevenson A well written post. Thanks for sharing your experiences!