Hey All. I'm looking into buying a lot on the downhill side of the road. Its 23' from the edge of the street to the property line. This is heavily vegetated hillside and the slope is about 50% (28 degrees). I'm thinking of providing a couple of off street parallel parking spots with a retaining wall and then building lower on the property with stairs going down to the house. My question is what are the rules on creating parking spots? Can they be right off the street and not on my land?

@Skye Parker unfortunately this question can’t be answered without more information. This is very location specific... what might be allowed for one street wouldn’t be allowed on the adjacent one.

First thing I would do is look at neighboring properties. Is this something that is common in the area? If so then you can probably get away with it. Your best bet is to contact your local zoning board or parking authority to get the green light. I want to stress that the most important thing is to get approval before you start spending money on construction just to be denied on your plan later

@Skye Parker   I don't know your local laws re: parking spaces, but I do know something about living on a hill with a steep driveway.

The steepest section is a straight line that's about 800 feet or so.  And that's where the erosion problems showed up.

When I say erosion, I mean SEVERE erosion.  We had a channel that developed on its own and turned into about a foot deep and almost as wide.  In heavy rains, there was an actual stream, running with a high volume and at a high speed, making the erosion worse with each passing storm.

I laid out a new design (below) and hired a paving contractor.  A proper asphalt paving job was $100,000, so that wasn't an option.  Instead, we resurfaced with 350 tons of reprocessed gravel.  I looked at where the water had a tendency to go and we pitched the driveway in that direction to drive it there with more force.  We then added 60 tons of rip rap at those points to slow the water down.  We filled in depressed areas where water pooled.

On the long downhill, I dug three diversion channels to dump water off the side of the hill and down into the forest.

The cost was $12,000, but in the end it solved the problem completely.

The bottom line is that with a hill as steep as I think you're describing, you'll most likely need an aggressive plan to deal with water, even if you only get sporadic heavy rains. 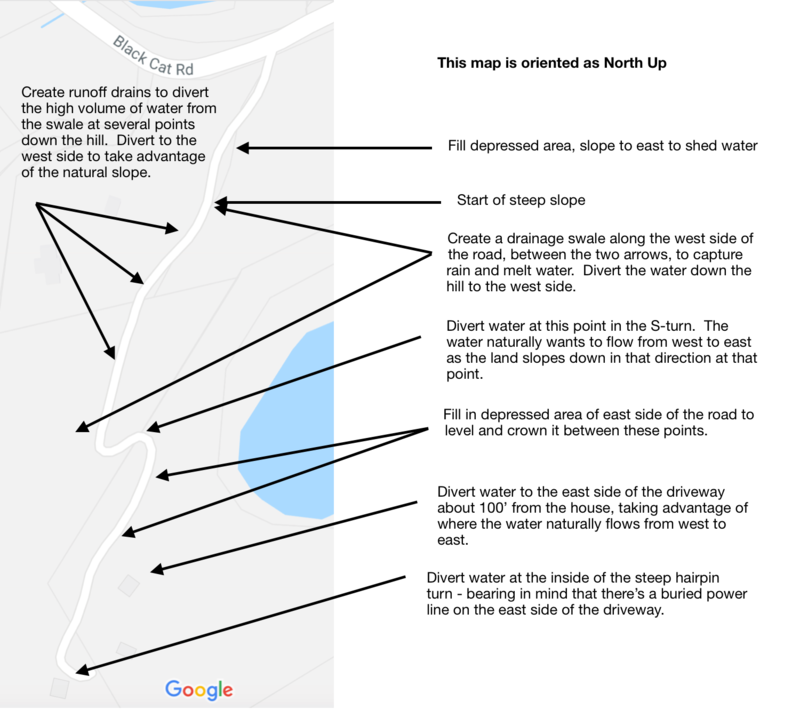 Thanks for the thoughtful responses. Charlie that is intense and this is a very wet area as well. This lot is incredibly steep. I'm planning on minimizing impact on the site by building on piers so all water just runs under the house as natural. Parking I'll need to ask the planner about.Thanks again. 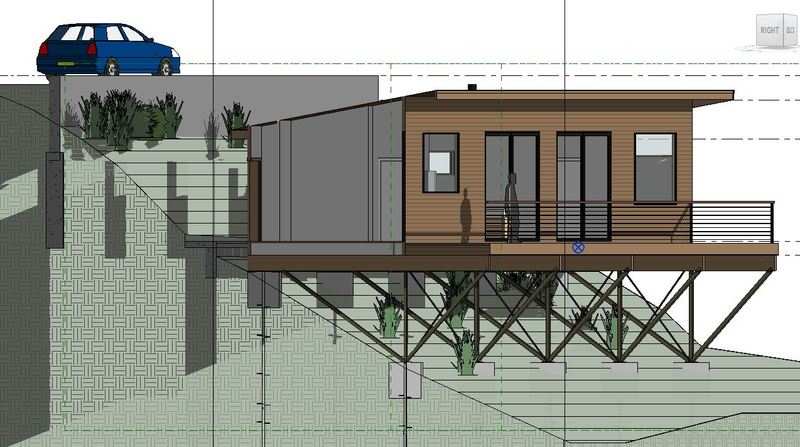 @Skye Parker The water flowing under the house will erode the soil and especially around the piers where there will be more turbulence in the flow.

The two main things I've learned from my experience here are:

1. Control the volume of water.  On my plan, I created three diversion channels on the steep ~800' run to capture water and dump it off the west side of the hill.  Your case is different, but I'd think seriously about diverting water around your property.

However, unless you can divert the runoff into a storm drain or a proper drainage ditch, you're probably not eliminating the erosion - you're just moving it to a different location.  Design your system with that in mind.

2. Control the velocity of the water.  In addition to dumping volume, the addition of the rip rap really slows the water down.

Those two strategies combined to completely solve our problems.