I'm building a duplex in my backyard of my single family. Feel free to just look at this and offer any feedback. The architect just sent this to me and it's the first draft. I'll have changes, but haven't presented them yet. 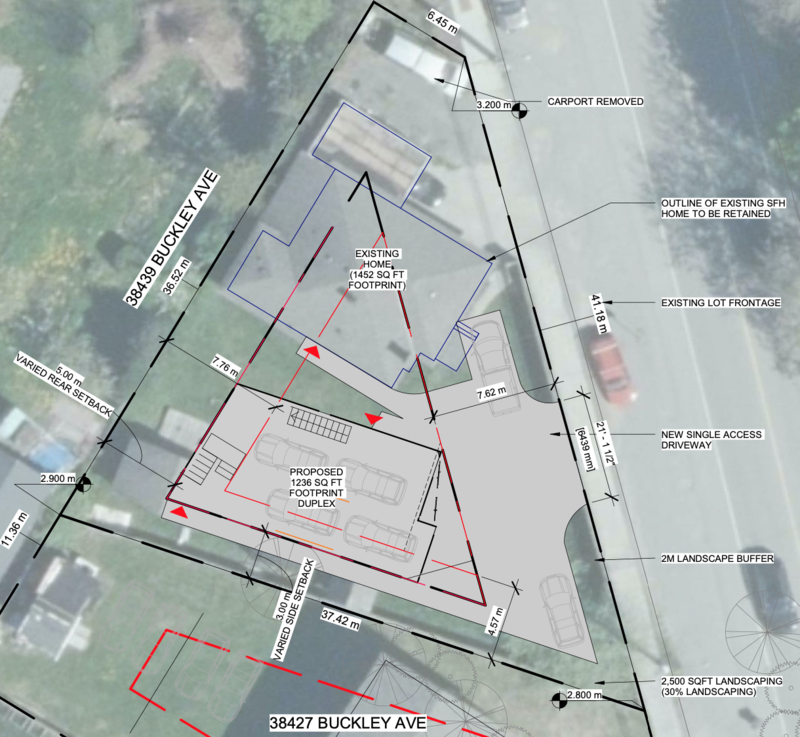 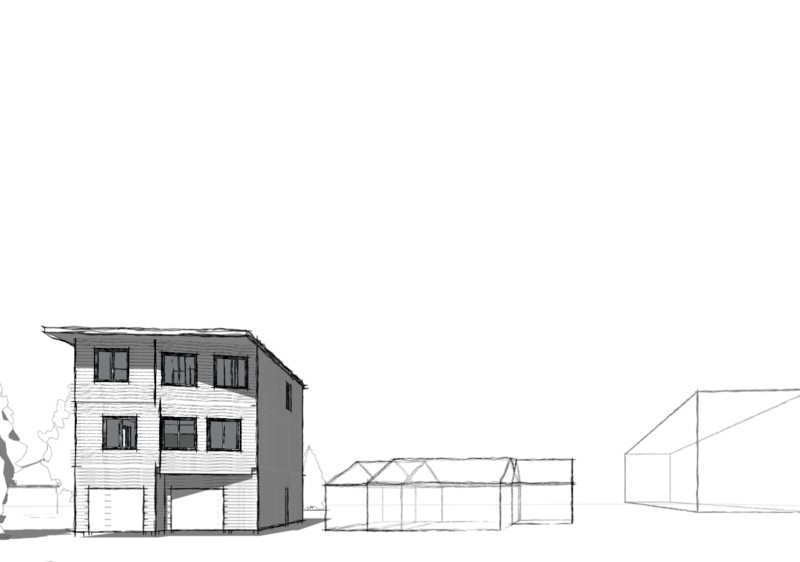 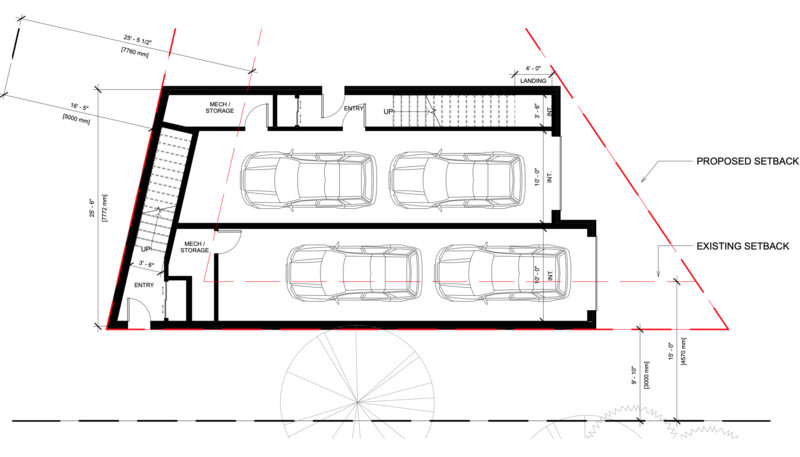 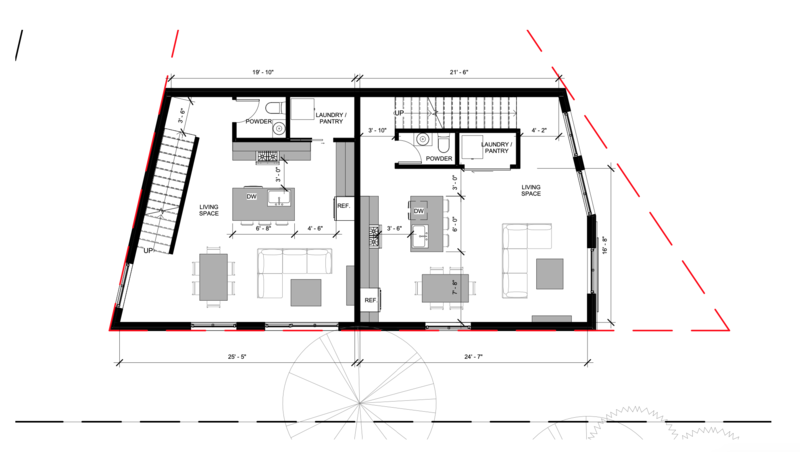 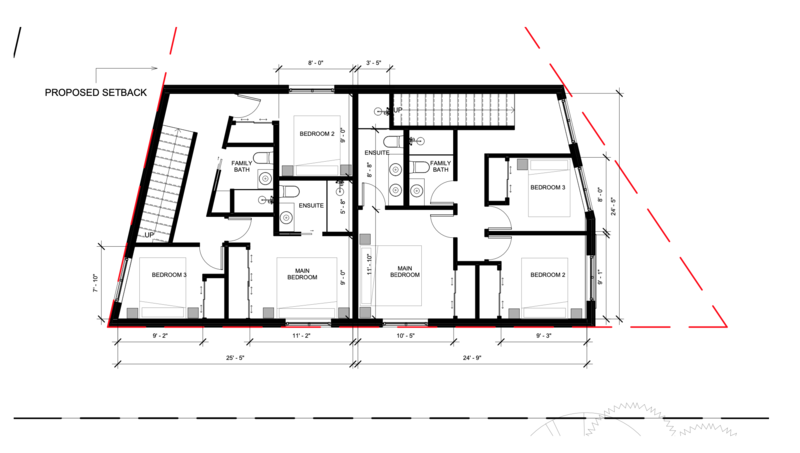 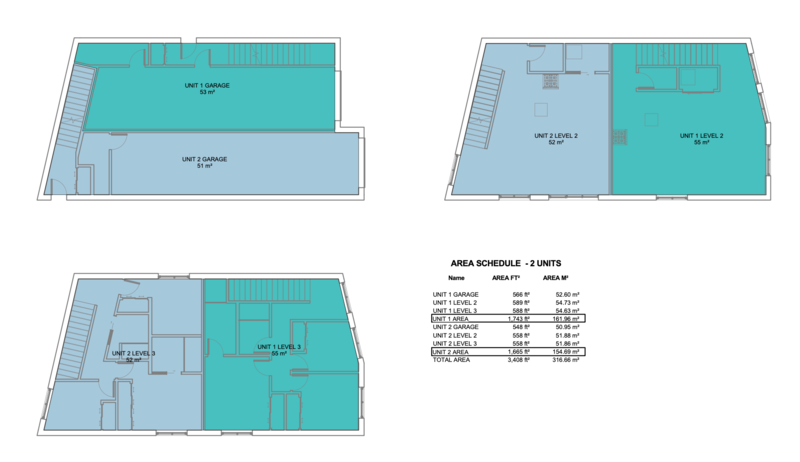 I like the form and efficiency of space overall for its size.  Seems a bit out of proportion to the existing house on the site.

Is there not a way to get from the south garage to the stairs for its corresponding unit?  I would think you would want to stay inside once you parked your car.

Being as tight as the garages are, I would suggest impact or abrasion resistant drywall or even better yet 4' high FRP panel to protect. I know you can get this in the subway tile look as well so it doesn't seem so industrial/kitchen like.

The western units second floor seems to have a lot of circulation space/hall way that won't be usable for anything else.  This is most notably between the island/stair and and dining area. Maybe consider putting the stairs to that unit in the southwest corner with an odd shaped landing/switch back and pushing your powder room/laundry to the west and then shoving your kitchen against the north wall. This will wreak havoc on the second floor but could make your second floor more functional.  The furniture show doesn't allow any wall way around it as its shown now anyway. (see attached image - sorry its not the greatest).  Also, don't put in area specific lighting like a chandelier. Can lights will work fine, and some one could use the dining space as a home office area instead.

I would closely at the drive approach from the street to the south garage bay, that will be an awkward s-bend turn that may take a few tries.  Look at moving the driveway entrance down further to the south for a more straight on approach.

Small things since you have the chance to do it right the first time: solid doors instead of hollow core, antimicrobial paint in the bathrooms, double stud walls with insulation between units (sound is the new asbestos in multi-family), 5/8" drywall throughout (and something special/strong in the garage - see above), if ceiling light/fan combos - get the switch with the controls in it so the tenant is pulling on the fixtures chains and no remote to loose. 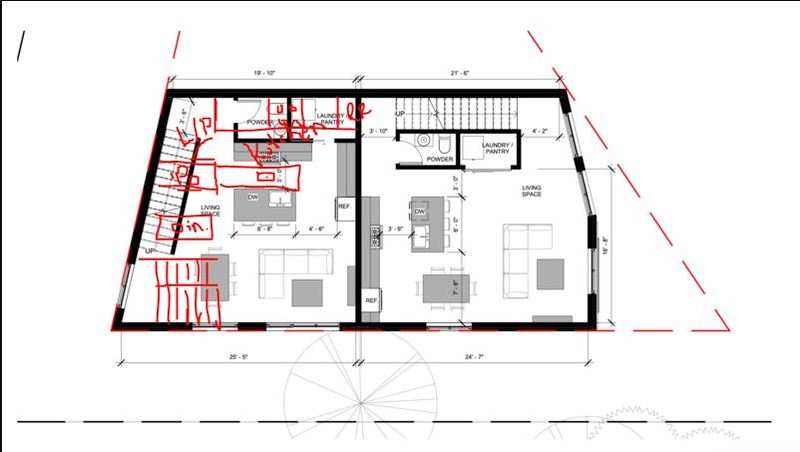 Nathan, great advice! I hadn't spent ten minutes to really absorb the design until now, then I read your comments and there's a few things that we both thought. To be honest, I'm a little disappointed with this design, but I'll deliver the feedback needed to get it where it needs to be.

1. You're absolutely right about the driveway being pushed further south. This will also allow the parking for the single family to be parallel to the road and both spots can be adjacent rather than split across the lot.

2. Your advice on the interior is correct, both from a design and construction point of view. I think that even the shape of the house could be slightly enlarged, bringing the south unit up a little further. I'd like to find a way to get the front doors on the front of the house. It would add a lot to the front facade.

3. The front facade needs work. How can we make it better? You're correct about it being massive in proportion. One of the "things" about this project is the current house is grandfathered. new homes can't use the first floor for living space due to flood levels. So almost no matter what I'll have a 3 story towering over a 1 story. How can it look more proportion. I was hoping to use a Panel system for framing, but I don't have to. Also, I don't need to be too stingy on this. The duplexes will likely sell for $700k+ each. Mountain towns after a pandemic. What can I say.

4. The interior needs so much work, I'll wait until the shape is redesigned.

All your input is SUPER appreciated.