I recently received an email offering lending. I asked for more to details to try and vet the party, and I was sent a website richardlendinghome.com for further information. Everything "seems" legit, what are your go-to processes to properly vet a lender? Note: I am still fairly new to rei, but have been building my business credit, as I learn and grow.

Ask them for a list of past clients that you can call and talk to. I have no problem supplying my clients with that info if they request it

3) Reluctance to write down promises or leave a paper trail

@Courtney Foster   Never heard of them before, but I took a look at their website for you and can tell you that you're not dealing with a real lender.  I post about this frequently to try to help people avoid being scammed.

First, some general tips for you on red flags to watch out for:

- Asking for a large loan application fee or other fees upfront

- Claiming they loan nationwide in all 50 states (most non-bank, hard money/private lenders operate in only certain states and don’t lend nationwide)

- Terms that seem just way too good to be true

That’s just a few things to watch out for. None of them alone guarantee the person/company you’re dealing with are a scammer, but if you see one or more of these red flags you should start to get suspicious and make sure you do your due diligence on them before sending any money or personal information.

Lastly, here’s some more info from BP on how to avoid these scammers that may give you some additional red flags to watch out for:

Tips for Avoiding a Scam on BiggerPockets

Now, on to specific red flags with this lender that you asked about.

That mere fact that they reached out to you (a stranger) and offered to do a loan for you (apparently with 100% financing and at an interest rate as low as 5% according to their website) is a red flag.  They also claim to be a "private lender", and I assure you that real private lenders are not doing that.  And certainly not at 5%.

Their website also claims they originate loans "throughout the 50 States of the United States of America and Canada and other Major Countries in Europe."  Sorry, but no private lender does that.

I also thought this was pretty funny...they require a "minimum 300 FICO score".  That's as low as the FICO score range goes.  Lol.  Why even put a minimum?

I could pick apart their website/lending guidelines all day long, but I'll just leave you with this.  On their list of "Recently closed deals" right on their home page, take a look at this yellow home on the left that they claim to have funded in "Henderson, Nevada": 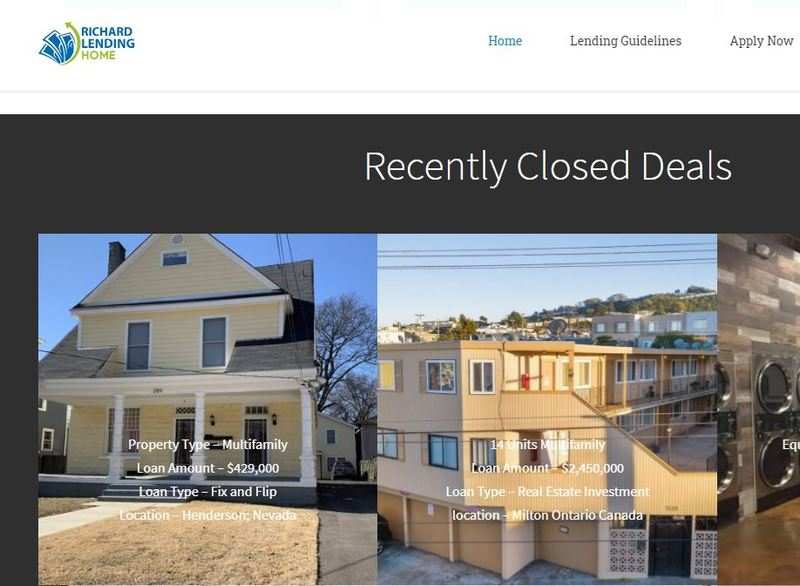 Well, I did a Google reverse image search of this image (I talk more about how to do that in my response to this post), and guess what?  That house isn't even in Henderson, Nevada.  It's in Memphis, TN and they just hijacked the photo from an old Zillow rental listing:

Anyway, I think you get the point.  If you want to know what the scam is here, you just have to read their website closely and they actually tell you what it is.  They're going to charge you an upfront fee of .5% to 3% of the loan amount, and it will be due IN ADVANCE of them funding the loan.  I'm willing to bet two things: 1) the fee will be towards the higher end of that range, and 2) once you pay it - you not only won't get the loan, you'll also never hear from them again.

Best advice I can give you is, don't do business with strangers on the internet that you've never met and know nothing about.  There's way too many scammers out there, especially in the "private lending" space.

Just trying to keep you (and others) from getting scammed.  Good luck.

Asking for up front fees!!!

@Derek Dombeck thank you very much for the insight. That would have been my next step. More red flags started to become visible, so I stopped communication. Thankfully, no pertinent personal information was shared. Thanks again for your feedback!

@Kyle J. WOW!! Thank you for such thorough feedback! I've actually had this happen once before(getting to the point of them requesting a wire transfer).

I was able to gather the "upfront" information, and call the bank to verify with the branch manager. I believe I may have saved an elderly woman's bank account from fraud that day(they wanted me to deposit the funds into her account).

All of this information has been valuable. Thanks again!

Thanks for the feedback everyone. It's definitely added value.

Everyone gave you some good information, @Courtney Foster . As @Kyle J. noted in his excellent post, this lender is clearly a scammer. There are many websites from scammers that are much more professional and not as obvious. Some from legitimate companies. I know first-hand how this works. Read here: Private Lending Direct LLC is a SCAM and I Own the Company

You can ask for references, check licensing, respond only to realistic terms – do everything you should do -- and still get scammed. The problem is you don’t know you’re even talking to a real representative of the company. You’re going about this wrong, Courtney.

Get off the web.

I recommend finding your lenders face-to-face at local real estate clubs and going to lunch. I put our hard-earned money where my mouth is because that’s how we find all our borrowers. Since this is difficult now, and everything is online, I’d call some of the local real estate club owners using Meetup and ask who regularly attended their club and has a good reputation. Call these lenders with a list of informed questions. If you don’t know what to ask, read here.

Your willingness to do business anonymously is an invitation to getting scammed. While there is no certainty until the money hits the closing table, there are better ways to find legitimate lenders. Instead of trying to “spot scam lenders,” which is almost impossible, use a process that reduces the odds of walking into one. That’s when you begin to check them out and take the advice above.

@Jeff S. Hi and thank you for the feedback.

To add clarity, the opportunity(or lack therof), presented itself to me. I know that I am fairly new to the industry, so it wasn't in my goal or plan to find a lender at this phase of learning.

I received the email(I'm assuming, from a recent group I joined). Which brought forth my posed question. I was not seeking lending at the time I was presented with the solicitation.

However, your points make perfect sense and are valued! I'll definitely read deeper into the links you've provided. Much appreciate!