While researching before investing. I found that the typical eviction time-frame in Chicago appears to be at least  3 months and up to 4 months.

Well, those are the risks one must take and due diligence checking all references could avoid some of this issues. However, can the Chicago Landlords confirm their real experiences and tips on how they expedited this process? 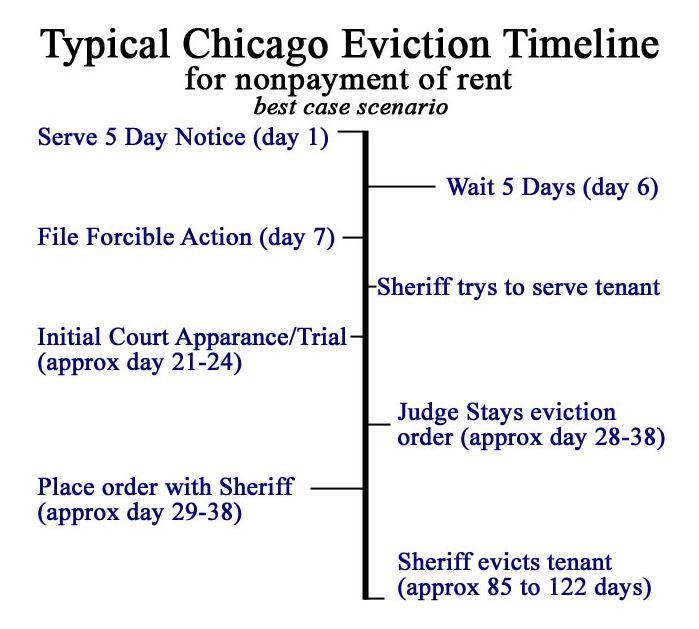 The specimen you posted does say, "best case scenario".

Because of certain other restrictions, it could take much longer.

You cannot evict during winter weather, for example. Chicago has had two consecutive years with temperatures below freezing from just after New Years until April.

We've had mild summers lately, but you also cannot evict in summer heat.

IL is a state where we have people known as "professional tenants": they pay first and last month's rent, and never pay again. It can take two years or more to get them out under IL law.

exactly why I'm buying rentals in Indiana from now on...had my first experience of a professional renter. I think the pros pay them to leave, didn't work for me.

We of course try to do all we can to avoid filing but in times when a tenant disappears and the place is clearly still occupied we need to.  Almost all of our evictions is when we buy occupied buildings and we need existing tenants out either for rehab or they won't agree to pay.

Even after we file for eviction we will still attempt to get the tenant to leave thru cash for keys. The amount just gets smaller the further along in the process it goes.

Our worst case scenario where we had to wait for the sheriff to come and move someone out was 122 days from filing to sheriff. I think sometimes we hear these crazy time frames because people start counting from the last time they received rent or when the initial due date which started the cause for filing.

@David Dachtera I hope you don't mind I add on to your comments.

"Professional tenants" scam artist that understand the system often prey on the unexpected and there is generally man red flags along the way.

Thanks for clarifying.  4 months isn't that bad.  I haven't had to file in Chicago so I don't have personal experience

Professional tenants - low life scammers-  can remain in the property for six months!  This is beyond ridiculous.

As a landlord, can one report this issues to the credit bureaus? If so, credit reports should be mandatory.  Can one pursue payments through small claim courts?

Our last eviction took 4 months.  Never had one that took more than 5 months.  Not sure there's a way to expedite it.

Brie is correct it can take many months to evict a tenant depending on the time of year. I only rent to section 8 or HUD tenants to avoid evictions completely. Best option is cash for keys to get them out quickly. I have evicted tenants in the past in 90 days and other times 6 months. The judge will always award the possession order for non-payment here in chicago but getting them out after the possession order is what takes the most time.

I just experienced and eviction in Chicago. The whole process took about 4-5 months. We ended up filing with the sheriff for them to come out and this wait was even longer. You never really know when the sheriff is going to come and our tenant moved before the sheriff came out. Also it's important to know that the sheriff won't remove the items from the rental. You have to hire a moving company to move the items to storage for the tenant I think for a period of time before you can dispose of them. Chicago laws are in favor of the tenant.

The one eviction I experienced took about 4 months.

Honestly I do not know how you landlords make money in these tenant friendly states. I can see in California at least where rents are minimal but the market shoots way up in equity value and when they sell they get a big payoff.

In areas of low to no appreciation and long eviction times with tenant friendly states I do not see what the draw is. Turn costs are a killer with rehab costs and lost rent.

Here in GA ( landlord friendly ) you can get them out in 1 month and usually no longer than 45 days. Tenants know they have to "pay to stay" or they are out. It helps keep the deadbeats away although you always have some. I can just see it amplified ten fold in these other tenant friendly states.

Do you build in very high lost rents and repairs for expected issues when buying there or do you set rents at the low end of the market to train the tenants you are the best deal in town??

As a landlord, can one report this to the credit bureaus?  I would assume the lowest credit report to rent should be 650.  Is this consistent for a B- building/area? Do you look at the CRs?

Can one recover the unpaid rent through a small claims court?

Can one recover the unpaid rent through a small claims court?

We've rarely had to evict & our time/money better spent on growing the business than chasing down someone for back rent in small claims court.

Thank you everyone for the feedback!

It seems evicting a tenant can take up to 6 months and is extremely important to check all references. If -or when- I decide to become a landlord, I will make a point to befriend a few Police Officers and Sheriffs.

This BP summary on how to screen tenants was very useful.

Ouch that is not a landlord friendly market from the looks of things. Hopefully tenant as @Justin Ericsson stated will take a cash for keys for best case scenario.

Hi BP members, looking at a deal in Chicago currently. 4 unit, 3 are occupied with longstanding tenants thats been there for 5+ years.

Numbers appear to work even with 1 unit vacant.  I would like to know your thoughts and if you all can recommend good PM and GC's in Chicago.

Your input would be great thanks ALL!!

At least, I used this to read the eviction a little more.

UPDATE on CHA and Evictions

Per the class I recently took, CHA will pay us during the eviction process and up to two months to find a replacement. That is for as long as we have done our due diligence and have a documented process by the book.

This, my friends, makes Section 8 a beautiful thing.

@HJ Bercy your info is too vague. Consider starting a new thread.

Time is only one aspect of evictions.  No one mentioned the damage to the unit they do on the way out. It can be significant.

@Eric M. , per the CHA class - Warnign!  I am very, very green on this- landlords have more leverage with tenants because there are no more vouchers being issued. Hence, they can loose Uncle Sam's moolah.  The vouchers are non transferable, either.

We have typically experienced 1 month to 1.5 months to regain possession of the property via lawsuit.

Above, many are assuming a sheriff eviction which I have found to be infrequent (approx. 25%).  More often than not, the tenant will leave by the date set by judge which takes about 30 days from day 1 serving the notice.

The biggest time delay on evictions is waiting to pull the trigger.  Tenants drag you along with broken promises and waiting on checks.  Landlord has to invest 1k in fees after losing rent money.  The professional discipline of always charging a late fee, serving 5 day notices regularly, and proper vetting of applicants are our best practices for avoiding eviction altogether.