I bought a house in Kansas City, MO last year and noticed that the driveway had significant issues.  It has large cracks  and is uneven due to an extremely large tree growing right next to it. By large, i mean a diameter of almost 5' at the base.

when I purchased the house this was one of the first things that i looked to repair.  unfortunately the three people i had come out and look at it said that by repairing the driveway they would likely cut the main root of the tree and kill it.  Since this tree is massive, it would likely cost $10K to cut it down.  this would put me at $13K to repair a driveway and clear out the tree which will significantly impact my cash flow.

Because of this i figured it would just be easier to ignore the issue all together and deal with an unattractive driveway.  It wasn't impacting the rent or deterring renters.

Yesterday, the city informed me that i was in violation of an ordinance to not have cracks in driveways over 1" wide and that it must be repaired immediately.

Does anyone have any ideas of how to resolve this issue?  the things that i had evaluated right now were as follows:

Has anyone else ever ran into an issue like this in the past?  Any Advice? 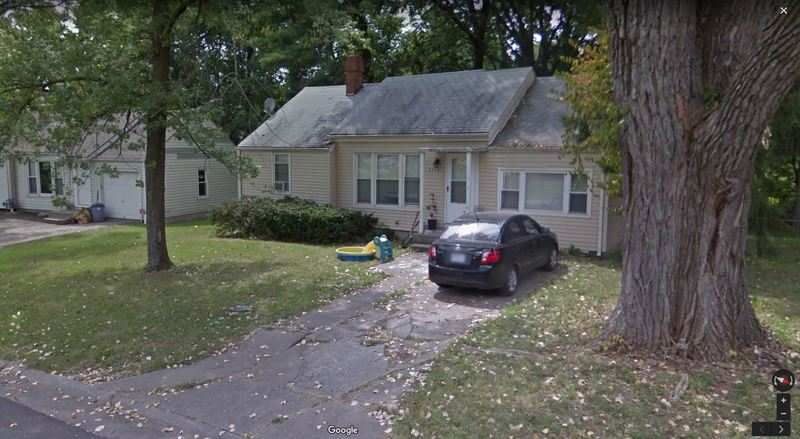 Would gravel meet the city requirements? That seems to be the cheapest easiest option. Then hope nature takes out the tree and insurance covers it.

That's rare for the city to comment on a driveway!  Those do look like large cracks though. I think you need a new concrete driveway. That would really set off the house and add value in the future.

@Tom Rychlewski Have you actually obtained quotes for removing the tree? I've had a bunch of them taken down and I can't remember it ever costing me more than $1000 per tree for the biggest ones.

I'm in MA where everything is expensive and the biggest tree to take down, with bucket trucks and a crane, was $3k. I would get a lot of quotes and considering how close it is to the house, make sure they have insurance.

I just had a tree removed in KC and it was almost 6k for first quote, think 2nd was about 4k. It was also awakard location and hard to get to, yours is far easier.

Probably could of done it a little cheaper but doubt that much.

Any good bobcat operator could easily remove that severely cracked up driveway with minimal root destruction . They would pop up the concrete , they wont be digging down more than 4 to 5 inches . I would then just stone it , or asphalt .

What about moving the drive way to the other side?
Remove the current drive way and have two off street parking spots next to the street with a nice walk up up to the front door, easier to leave the house without having to back up into traffic.

Call the city and ask what to do or ask what people usually do. Maybe you could fill the cracks in with concrete repair ( the stuff in a tub that you mix with water) and then caulk with that gray self-leveling stuff by silka or quickcrete.

I second/third the idea of getting more tree bids. It is the cause of the problem and will continue to be troublesome.

It is just going to cause more issues down the road--like eventually crack your next driveway, impinge on any underground pipes, put leaves and branches on your roof/gutter every storm and every fall, etc.

Nature is powerful; those roots might even reach the foundation of your house....

I had a big tree downed last summer for 500 bucks... A nice surprise and they gave me the wood cut in rounds (like a hundred plus worth of firewood).

Ask around (property managers, realtors, investors, etc). You might get a break if you don't need the stump ground down (and can landscape around it or something.

Then I would actually look at (again back to bids) getting a new concrete driveway. More expensive but long term more peace of mind. They can also cut off and remove all the roots which would rot and possibly allow settling.

Since you were willing to deal with an ugly driveway, my sense is that you prefer not to take on anything super costly. So, the goal would seem to be to satisfy the municipality.

I would investigate patching and resurfacing the concrete. Perhaps they can patch it and resurface it for a modest investment and make it look fairly nice for a cheap price (relative to other options).

It will probably crack again, but this might well be a solution you can live with for a number of years before having to address is again. This will give you time to plan for a more substantial repair at that point.

I don’t see why you can’t get some quick patch and maybe some seal coating. Fill the cracks, and then you aren’t in violation of the city ordinances.

@Tom Rychlewski , I'm in the "get more quotes" camp for tree removal. My neighbor had a tree removed a couple of years ago, behind the house, needed some weird crane thing to remove it, and it only cost $5k.

Is that a Silver Maple? Those things are garbage trees, and being so big and so close to the house, a good stiff wind could knock it right down into the roof.


@Tom Rychlewski , I'm in the "get more quotes" camp for tree removal. My neighbor had a tree removed a couple of years ago, behind the house, needed some weird crane thing to remove it, and it only cost $5k.

Is that a Silver Maple? Those things are garbage trees, and being so big and so close to the house, a good stiff wind could knock it right down into the roof.

mine was a silver maple and to make it even better..... had been hit by lightning and no one would trim it so I ended up getting it removed...  Insurance threatened to drop me if I didn't get it trimmed, tree guys say a payday haha.

Tom if you need help with quote message me

I would simply patch the cracks and seal the driveway.

Yes the city of Kansas City in its infinite wisdom required trees to be planted or usually planted them - they got a great deal on trees that grow big, and do it fast and has heaving and cracking driveways and sidewalks all over the city and most of them drop spiny balls all over the place that cause other problems.

You should be able to get a tree removed for way less than $10k.

You could also epoxy inject and seal if its just cracks, but if it is uneven you might need to do something else.  A patch kit or asphalt over it all is very common.

Damn, lots of tree haters in this thread.  I like mature trees, if the tree was healthy I'd try to keep it.  Mature vegetation is considered a selling point in my area.

Thanks everyone for your comments.  I think i have a solution but want to respond to everyone's good ideas.  I took these to heart when trying to find out the right answer.

@Matt K.  I appreciate your advice about gravel.  City will not allow me to go backwards.

@Mackaylee Beach I dont mind replacing the driveway if i thought it were something that would increase my rent.  However, i do not think that by spending $10K here will result in a $100/mo increase in rent.  As such, i could just buy another house.  My goal is to maximize the dollars i spend.

@Matthew Paul   This tree is huge. it is a Cotton Wood which is very strong and resilient, however, there is a strong chance that if the construction company will kill the tree if they are not careful. I got 3 quotes and all of them said they would not be careful. They all said that they would in all likelihood kill the tree and wanted me to sign a release of any liability associated with the tree.

@Marian Smith I did ask the city if i could do something like the self leveling caulk.  They agreed but when looking at the driveway it is not level.  I believe it is not in good enough shape.

@Michael Boyer - I agree about getting more tree bids.  Perhaps i can do it when three trimmers do not have a lot of work.  I actually called the city forester and asked for his advice.  He gave me the companies that he would typically use.  He did give me a lot of good advice to prevent from killing the tree when replacing the driveway.

He mentioned that if I replace the driveway I should :