This is for a property in Kansas City. A 1500 sqft house. Tenant did treat it poorly, but wondering if these expenses are reasonble? 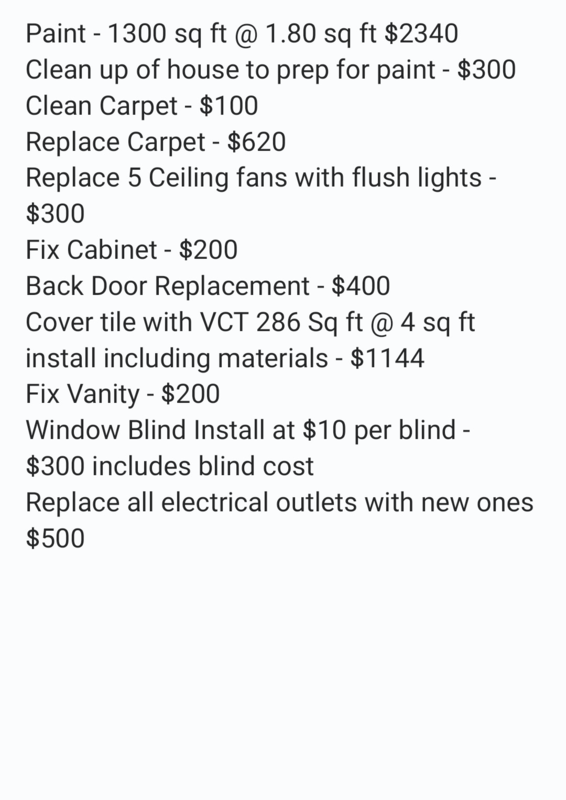 Maybe but why are you replacing outlets I’ve never done that before unless one occasionally went bad.  I also like ceiling fans and tenants do as well what justification did they have to remove them.  Same with the back door what is wrong with it where it needs replacing.  30 blinds broken, sounds a bit extreme as well, usually I replace a few but never all.  Same with the tile is it chipped or does it really need to be covered. I’ve never hired a painter to know prices but you are looking at most 2-250 in materials so that’s 2300 in markup for labor for a fairly small house.  If this is a house you just bought a lot of this could be deferred maintenance and you should have planned on updates on the turn. If you had it a while seems like a lot to need updating but if there is damage how much was the deposit and what is the on doing to recoup your losses from the tenant.

The costs seem reasonable, except for the painting costs. Are you replacing outlets to go from two prong to three prong? They can’t all be bad at the same time. I’d keep the ceiling fans. If you have a property manager, they (or you) should absolutely try to recoup costs from the tenant.

Those expenses look reasonable to low from my point of view. Trades are very expensive these days, and getting things done quickly and properly is what counts. As land lords we get to improve our properties and write off expenses against income; generally that is a pretty good deal.

Pricing isn't out of line - maybe the painting is a little high, but it depends on if it included the paint and materials.

I question why you are doing some of the work. Are you updating the place or fixing stuff the tenant damaged? Because, a lot of that stuff is not under normal wear and tear.

From a trade perspective, it is not bad for all of the items you are buying and the labor involved. Quality tradesmen are hard to get scheduled these days and you will pay a little more for the good ones.

None of the unit rates look particularly high to me, the paint would be high for a single coat but if multiple coats are required that quickly becomes more reasonable. Also not sure if there's trim paint included in that isn't really itemized but blended into the wall paint pushing the overall rate higher.

The question you should be asking yourself is whether all of the work performed was actually required. If so, I don't think you did bad.

Costs seem reasonable, assuming all this work needs to be done. Did you get photos of the damage after the tenant left to verify it is all needed?

This is one of the risks when people invest in cash flow markets. Often you find C class properties and tenants will be hard on the property, resulting in larger expenses.

You are into this for $6K, so even if you are cash flowing $500 a month, it is a break even for the year. That doesn't include other repairs, lost rents or leasing fees. This can turn a "cash cow" into a "cash hog" quickly.

@Joe Splitrock those costs look spot on to a bit low to me. I turn 300 units each year.

The costs seem mostly in line, maybe a bit high on the paint, but then we do all our own work.

I understand replacing the electrical outlets, we do this too since our houses are older and some of the outlets are pretty grungy/ have stopped working, and it looks a lot nicer with white outlets instead of the beige or brown that was in style when they were installed.  Thankfully, a lot of these charges should be one time items, or at least not every turnover, and future repairs due to tenant damage will be paid for by the tenant.

If they had to replace the carpet, why did they clean it?  And why did they have to replace electrical outlets?  Some of that sounds like excess damage and should have come out of the tenants' deposit.  also why did all of the blinds need to be replaced?

If your outlets just look bad and don't actually need to be replaced you could try these:

I think you can find them for quite a bit less expensive at home depot but I wanted to give you the idea. We've used them in many of our houses and it changes the whole look of the room without having to deal with actually replacing the outlet.

Prices seem relatively reasonable to me. It sucks to spend that much money between tenants if you weren't expecting it.

Is this managed with a PM or self-managed? If a PM, you should have a conversation about goals of the house. If your goal is to keep the house in tip-top shape, then these costs seem reasonable. If your goal is to maintain the house with as little money as possible and make the most month-to-month, then this approach was probably not the best. They probably replaced all blinds just so they'd match. They probably replaced the fans due to sagging blades or even just ugly/outdated. There's cheaper ways to deal with those things if your goal is to limit expenses.

I had a similar conversation with my PM, and she knows it's important to me to keep newly renovated units looking newly renovated. So it's worth it to me to spend a little more every year in maintenance. But some landlords have different goals.

Pricings look fine. But why are some of these work needed to be done? Are all the ceiling fans bad? Are all the outlets bad?

Doesn’t look bad to me

@Joe Splitrock those costs look spot on to a bit low to me. I turn 300 units each year.

WOW 300.. you must be managing thousands of units..  that's got to take some serious coordination.

wow all good comments. I'm surprised the cost over there is in-line with CA, especially the painting. Definitely not good news for CF market.

Joel has good point. It's worth being fixed if it's located in expensive/good market.

I have several properties in KC. I think the cost seem in line but just a couple thoughts that come to mind

1. Does the whole house really need repainting? When was it last repainted? I'm thinking if it was painted recently then just touch up the wall paint and repaint the trim and it will look as good as new & much cheaper and quicker. You can also get alot of marks off the wall using magic easier. Also make sure to ask exactly what they are painting for that price. Some people will bid a paint job and then not include stuff like the ceilings or trim or certain rooms and closets etc etc. and tell you that is extra which is really annoying so ask them specifically what they are repainting for that cost and get it in writing. Also if you get it repainted keep careful records of exactly what color and type of paint is used so you can touch up between tenants & that will save you tons of money in the future.

2. As far as replacing carpet I wouldn't advise. Tenants don't like it ..looks dated & ugly plus carpets retain smell and they tend to need to be replaced between every tenant so I wouldn't waist my money and do vinyl wood floors instead or refinish hardwoods if underneath.

3. I wouldn't replace ceiling fans unless they are broken. I've found tenants do like ceiling fans in the bedrooms as the KC summers do get really hot.

4. Fix cabinet & Vanity.  I'm wondering if its same price to just replace it instead of fixing plus you'll get more life and usage out of them....rather than just "fix' and 3 months later new tenant breaks them again cause they were duct taped together for $200 each.

5. Not sure why the outlet's need to be replaced if they are good and working. If it's a cosmetic thing you might could scrap that cost.

6. Definitely go after the tenant and keep the deposit if they did damage for all this.

Wow.. I suspect some of them maybe its just send in the cleaning crew not a full blown paint floors and damage ?

so if half your portfolio turns every year what is your average length of tenancy ?    When I had all my C D stuff that we owned

turnovers was just such a big chore then re marketing them new leases set up hud all over again.. Not sure how anyone would call

this passive.. but this was in a high turnover type area.. Turn over on the PM side means income so I get that.. but as owner operators it means money out the door.

All below national cost.  Ceiling fans not sure they are needed, West coast will cost 2-3X.

Wow.. I suspect some of them maybe its just send in the cleaning crew not a full blown paint floors and damage ?

Our average is about two years but I have some lower-income apartments that average one year. These are not full turns. We usually repair damages, clean, touch-up paint, professional carpet cleaning, etc. I try to inspect the unit 30 days prior to departure and create a punch list. Then we schedule contractors well in advance so turnover is done quickly.

Mike Baxter
Somewhere in the Scorching Heat of AZ
1.48
Score