I'm torn on this one.

The economic and investment side of it from a professional stand point is frustrating. Investors can get great returns on these properties. It brings outside tourists in and contributes on that front of the local economy.

A local side of it is that a lot of units and properties are being taken off the market from long term residents.

My wife and I used to rent out a room of our house on Airbnb when we lived in NY. New York state instituted a similar law. No short term rentals under 30 days unless it was your primary residence. We were still able to continue renting it out until we moved to SD. People doing this similar thing in San Diego won't have to stop but it sounds like there will be for fees and permits they have to apply for.

Thoughts on this very recent change?

As somebody that has been patiently waiting for a good STR opportunity in the SD area I'm (for lack of a better term) completely bummed. I actually just got back from SD and stayed in a little Airbnb near Mission Bay and can't believe they would make an overarching decision that would basically wipe out 80% of the available rental units. I find it funny that they lay a massive hammer on the STRs like this but yet they allow a bunch of scooters to be used everywhere and dumped on the sidewalks like trash each night. The Catamaran hotel is probably going to cost $1000/night now! :)

I have properties in Lake Tahoe where we have had to deal with permitting regulations on all sides, but even Tahoe didn't come down this hard by limiting it to only owner occupied homes.  They simply regulating the amount of permits, increased fees and adding enforcement to combat the major issues.  It would have been nice if they could find a little medium ground from where it is to what they are proposing in my humble opinion.

My guess is there will be quite of a litigation to follow this and we haven't seen the end result.  One thing I learned from Tahoe is that the whole issue is constantly evolving and likely will for several years to come.

Next summer, this will lead to an increased supply of long-term rental units (and a drop in rental prices in communities such as Mission Beach).  Might even be a few good deals to pick up from folks who'd rather sell than change their business model.

@Jon Crosby it definitely was a hasty decision and you know that it is going to get challenged. I like what you said about Tahoe. I think regulating permits is a much more reasonable way to do get the desired result. The good thing is that it won't take effect until July 2019. I imagine we'll hear updates in the meantime. Until then, all the investors who might find themselves stuck with STR's can figure out how to take their operation underground (good luck!) or figure out some alternatives.

It's a perfect example of risk versus reward. STR's are high risk/high reward and situations like this prove that.

@Brent Blum the higher supply of long-term rental units would definitely be good news for local residents. I like where your head is at with investors who might want to sell.

I was hoping to see more of a compromise somewhere between what passed which is very restrictive and the Mayor's proposal. I am also torn on the issue, it will hopefully alleviate some of the demand but at the same time I like staying at STR's and would have considered investing in them as well.

I won't be surprised if there is a legal challenge.

THere are definitely 2 sides.  A lot of Pacific beach has been bought up by investors and only offering short term rentals, so the longstanding owners are annoyed.  Longstanding renters and students are seeing the rents jacked up big time with fewer places avialable for annual leases.

I look forward to seeing the litigation that results from this. To me it's painfully obvious the council sold out to hotel lobbyists. For full disclosure: I'm a vacation rental operator in San Diego.

The measure the mayor put forward was nearly identical to the one that nearly passed in December before Alvarez, one of the original authors of the December measure, torpedoed it. In March Chris Ward headlined the San Diego Tourism Authority's annual meeting, a free event at the Dream Theater at Sea World that was fully catered with alcohol and had porcupines and other animals being brought out at the cocktail party following the ceremony. His about-face on the issue 3 days before the meeting was perfectly timed to catch everyone off guard. Before that the Mayor's plan was thought to have the 5 votes needed to be codified and in my opinion it was a fair compromise. Limiting vacation rentals to a primary residence + one additional permit per operator would weed out a lot of folks who wouldn't bother with the new regulations and nearly $1,000 annual licensing fee. The meeting on Monday was a complete charade with the backroom dealing that occurred beforehand. The mayor's plan didn't stand a chance.

According to the the U-T the largest amount of new housing units built in a year in the last five years was 6,400, while the projected need is between 17-24,000 units. There are 11,000 vacation rentals in San Diego.

If the reason housing is becoming increasingly less affordable in coastal areas isn't obvious the last several quarterly reports from Berkadia spell it out as clear as day: 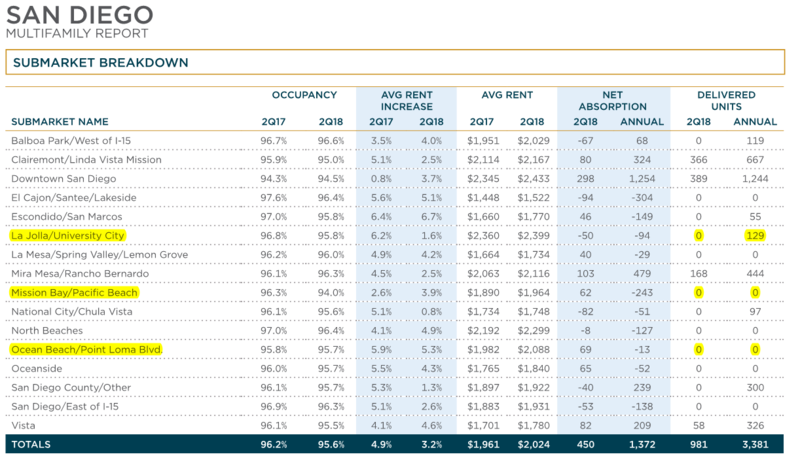 Housing affordability is unlikely to change with this ban. I saw an estimate that 80% of San Diego's visitor accommodations come from whole home vacation rentals. Our ability to host conventions and other large events such as Comic Con will be seriously impacted by this if it holds.

If anyone has lived in a coastal California community they are aware of the aggressive NIMBYISM and collective power of the community. They are aggressive, between that and hoteliers this path seems very easy to predict. I live next door to a vacation rental, if I weren't an investor and understanding to property rights. It would be easy to be against them. They take up tremendous amounts of parking and fill my trash, recycling and yard waste containers with stacks of pizza boxes. For an uppity old person who likes to contact their council member, this is gold.

I feel there is a responsibility to a property owner and the greater community they are a part of. They've created some wonderful ADU policies recently that allow us to build units for long term use only. While its frustrating the rules are changed likely due to political reasons in regards to Air B&B. We have an awesome opportunity to add units to our properties now and address the housing and rental shortage while getting cash flow.

I agree that San Diego won't see much of an impact in affordability just because STRs become unattractive, but it will be interesting to see how this affects certain submarkets like PB and MB. I read a quote from a STR operator in the U-T that said Mission Beach will be a bloodbath if this sticks. Cant say I disagree, but am also curious just how low beachfront property values could fall before they hit a speculative support level from investors banking on the law changing in the future.

I always hoped that any regulation would have a grandfather clause for long time STRs.

It has been out of the long term rental market so long that I do not have much clue as to what the current LTR rent is but I suspect it is not very close to the ~$15k/month that is the current rent average.  If the current market is $8k (I will be surprised if it is that high) then the rent to value ratio would be ~0.625% which would make it tempting to sell at current value.

So it may result in a drop in price as not everyone purchased many years ago. Without the ability to STR, recent purchasers will have large negative cash flow. If prices drop enough I will be looking to purchase.

So we will likely take a wait and see approach.

@Dan Heuschele I sense that there will hesitancy across the board to see how this shakes out. Other investors (fix and flip + LTR) I work with have kept STR in their back pocket as a short term/back up option.

I feel for you with your STR in Mission Beach. I too would hope there would have been a grandfather option for you!