Hey fellow BPers! I know the market is hot in a lot of places, especially here in Texas, but DANG it’s tough to find a good deal here in Fort Worth. I don’t say this to complain cause I’ve had a great 2020, but I’ve realized I need to start putting more thought into how I find my deals.

With that, what's everyone doing to find the best deals in hot markets like this?

Looking forward to connecting with anyone and everyone!

Seems Like Columbus OH beat Dallas in best place to live though... 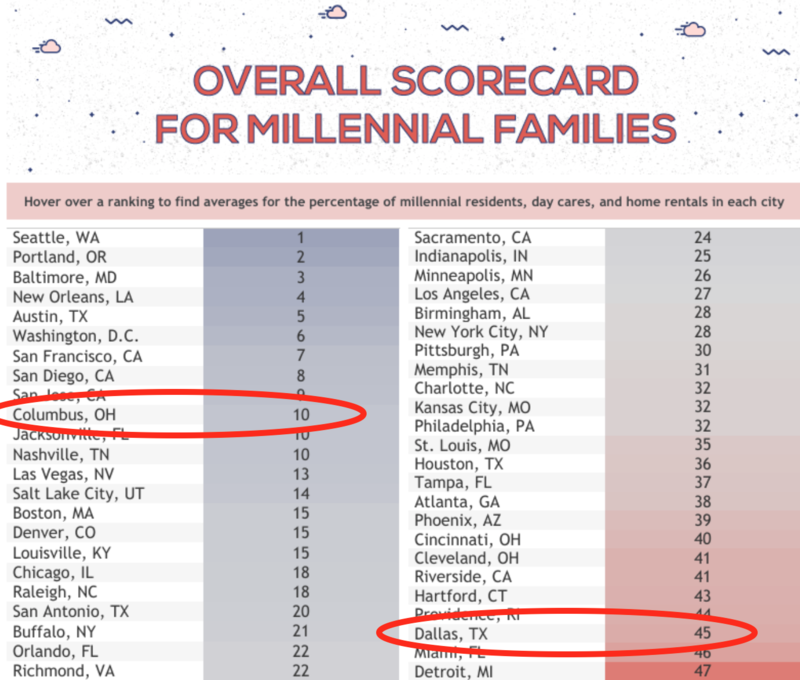 @Steven Wilson as much as I read the forums, I should've expected an Ohio callout! The Texas pride in me will never agree with Columbus, OH being a better place to live than DFW, but I guess the data shows otherwise! If I had the confidence to invest OOS, Ohio would be one of the first places I'd look at.

@Steven Wilson as much as I read the forums, I should've expected an Ohio callout! The Texas pride in me will never agree with Columbus, OH being a better place to live than DFW, but I guess the data shows otherwise! If I had the confidence to invest OOS, Ohio would be one of the first places I'd look at.

Buy one property here in Columbus, and I promise you, after you see our appreciation, cash flow, and midwest charm, you and your family will be on your way to live here! I do love DFW though, I have a lot of friends and family who enjoy the nightlife and sun down there.

@Hayden Lyon It is hard out here in DFW finding properties. It all just depends on what you're looking for. Crazy thing is now at the end of the year I'm finding more flips than anything else and at the beginning I was finding more rentals. VAs are a huge help if you're on a budget. They do a lot of the work for you. If you have more money and acquisitions person would be able to free up so much of your time to go do more important things. Most of my day is taken up by looking at/for properties for myself and clients. It's not hard it's just very time consuming. If you're looking to free up the time then hire somebody else because trust me this is a very low $ per hour task.

If you're looking for how to find the deals right now try something new. Find a different wholesaler that gives you a different look at different properties than just these big names. Maybe start targeting High DOM instead of what just comes out. A lot of people forget about the stuff that's been on the MLS for half a year. Maybe it's time to pivot a little to try and see if something new works for now. Or even works better than what was working before.

@Hayden Lyon , @Alex Grosvenor Darn, just when I thought to get in to Texas game I run in to this type of information, OK that was a joke. From my observation, DFW has always been HOT. Property prices didn't tank after 2008 Fin crash, and appreciation seems to be fairly steady.

I had love to connect with some I-35 corridor (DFW, Waco, Austin, San Antonio) based wholesalers, investors, lenders. If you are one, hit me up.

@Alex Grosvenor Appreciate the reply and all great points! I've not pursued any wholesale deals and have been quite passive with finding deals. With that, I have been able to find a few deals in 2020 off the MLS that have turned into successful BRRRR's. Interesting you say that because that's actually what I've been doing! My last property was actually one that was listed for 6+ months. It's funny though, how a listing will sit dormant for months, but as soon as I make an offer, another two or three follow, and I lose the deal. Maybe it's coincidence or maybe I'm being followed! lol

I hardly even try to go after the day one listings anymore because everyone has the same notifications I do, and I can't compete with the big cash buyers and multiple offers that come in an hour after listing. Don't get me wrong, I still make the offer, but it has not been nearly as successful. I can close quickly, but it's not with cash.

I think you're spot on with how to use my time wisely. If I'm being honest, I did not think 2020 would be as successful as it was (chalk that up to not having big enough goals!) and I was not as proactive as I plan to be in 2021. So now I'm going in to 2021 thinking about how we can make it better. I think that starts with every point you made above!

Given we have limited time and sometimes limited funds, we (my wife and I) are exploring ways to source more deals. Part of that approach is to network and be very targeted in our pursuits (i.e., one zip code, one demographic, one property type, etc.). Since we don't have the time, nor the funds, to do what the larger wholesalers do, we have to figure out what we can do that will differentiate us from them and still be able to compete.

I've also not networked nearly as much I should, so I'm not connected with wholesalers other than the big players. Hopefully the next few weeks/months will result in a few more connections.

@Hayden Lyon That's a lot of good stuff right there. You're still finding and doing some BRRRR deals which is more than most people can say about 2020.

It always seems that way doesn't it? Property has been passed up so many times.Sat on the MLS for 240 days then you offer on it. Next thing you know 3 more offers came in that day either before you or after you. It never had any offers before. Ain't that just the name of the game! Lol. It's all a numbers game. The more houses you look at the more offers you put in, the more offers you put in the more that get accepted. That's Real Estate in the market were in right now. Whether people are investing or just buying a home it's just that competitive.

Your network is your net worth. I believe that fully so go out there and try to find some like minded people! Could solve your limited money and limited deals problem. Just a thought!

@Hayden Lyon   Congrats on your success especially in 2020 and in this market!  It has been a challenge to find a deal and kudos to you for thinking differently.  I read @Anson Young 's book on Finding and Funding Great Deals (great book BTW for a newbie like me) and now my agent and I are gearing up to do direct mail marketing in 2021.  Agree with @Alex Grosvenor , your network is your net worth, so happy to connect and chat!

Where did you get this chart from?