If you are considering hiring Suncoast to manage one or more of your investment houses please read this first. It is rare for me to leave a negative review, especially knowing how detrimental it can be for a business, but in this case it has to be done. You deserve to know this before you begin a contract with Suncoast.

I own multiple rental properties in multiple states. I work with multiple property management companies. I have never dealt with a company more incompetent to take care of a house than Suncoast.

This is going to be a long review. If google didn’t limit character count it would be much longer.

I will attempt to briefly summarize the type of experience you will have if you choose to work with Suncoast:

1 - Tenant was caught red handed with a dog in the property. This was a violation of the lease. I communicated this with Suncoast and they failed to do anything about it.

2 - During the vacancy period the AC was not turned on however the blower was on blowing hot humid air all over the house and causing ridiculously expensive power bills. This led to the development of a mold problem.

3 - Management company never told me about the mold issue, I only found out because I had emailed them to ask why the house was no longer listed as for rent. Mold issue was discovered in mid June and as of July 16 when I terminated my agreement with Suncoast I did not have a single repair quote for the whole scope of repair. An entire month went by without me receiving any useful information from Suncoast in regards to the extent of the damage and the price to have it repaired. Ironically I was able to get multiple quotes in less than a day after terminating my contract with suncoast. Also, I ended up selling the house and three separate professional home buyers inspected the property and found no evidence of mold in the entire house. I could have easily been tricked into dishing out over 10 grand for suncoast to fix a problem that didn’t even exist!

1 - Ryan, the turn manager viewed the house when it became vacant. 20 days later I received a repair estimate - The house had been destroyed by a tenant (placed by Suncoast with a ridiculously low security deposit). He prepared a list of things that needed to be repaired. His list, while long, missed extremely important items which include but are not limited to: thermostat broken, tile floor destroyed in kitchen and bathroom, 3 interior doors destroyed, broken screen door, missing towel bars in the bathroom, spilled paint on floor and carpet. I honestly have no idea if this would have ever been addressed.

2 - There was never any communication with me as to how repairs were going. On July 16, 2 months after I approved the list of repairs, I found out that out of the entire list of things that needed to be done the only one that was taken care of was the paint job. This is indisputable and was even communicated to me by Suncoast. I am not sure when they planned on doing these repairs.

3 - The paint job that was done by suncoast was so poor that it has to be redone.

4 - House was so poorly maintained that I realized it was hopeless to have this asset while living out of state. I realized that my only option was to sell the house for a loss. Multiple experienced home buyers looked at the house and all of them told me they were shocked that a property management company would allow a house to be in such a terrible condition. 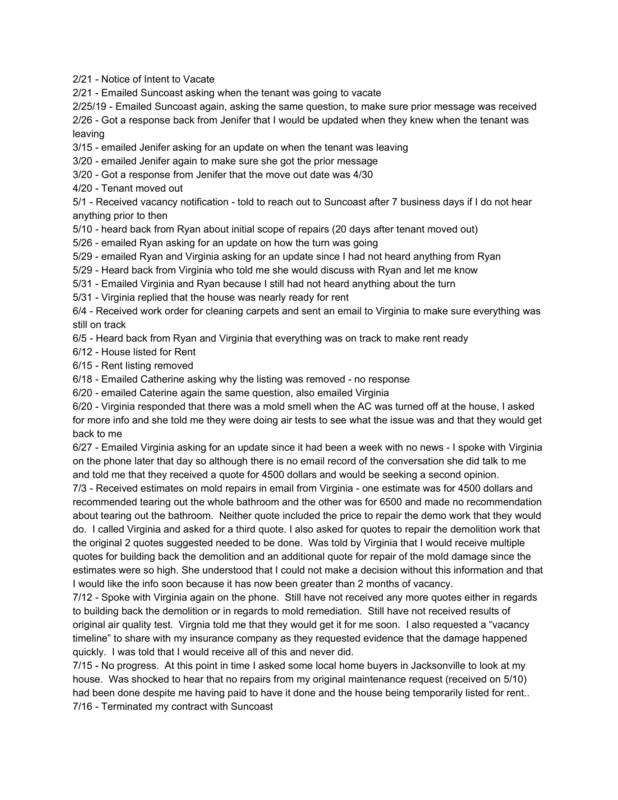 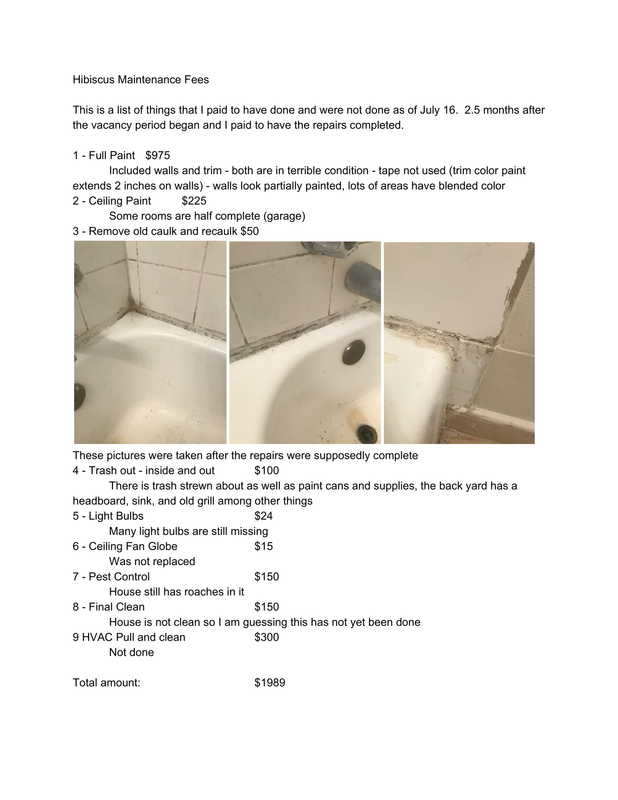 I am a realtor myself and also investor. probably more on investor side. To be honest, bigger management companies could hardly handle phone calls coming in. Sometimes it is best to find a smaller PM company or even individual agent ( assume this agent has min 10 properties ) so you can get the service.

It is doable to manage remotely if you spend time to find right people and have some backup there.

Wow. I was getting ready to call Suncoast but searched them again on here first. Won't call now. Thanks for posting.

Thanks Will. Though I am new to REI I was considering the Jax market. When I start there I will definitely steer clear of Suncoast.

Anyone have any suggestions for a good PM company in Jax?

I have used Suncoast for about two years and have not had these problems.  However, I will say that I have not yet had a vacancy or turnover.

has anyone used Nest Finders?

I haven't been impressed with Suncoast either. They came along with my purchase in Jacksonville.  If things don't improve, I'll look for new PM at end of agreement.

If anyone has recommendations for good property managers in Jacksonville and Ocala areas, please message me! :)

@Mark Fries I'll check out Valiant. Thanks for the recommendation!  P.S. do you work on residential homes? Could always use a good contractor. :)

Yes all I do is residential rehabs and flips. Let me know! Thanks

I'll Co-sign on this thread. Suncoast is an absolute nightmare. Worst PM company out of many we deal with. They won't return a call or email for days if ever. Terrible service and management

Hi Par, I’m sorry you feel that way. I’d like to schedule a call with us to discuss the issues, please reach out.

Sorry to hear that Par, wish you the best of luck finding a better property manager.  It blows my mind that Suncoast is actually still in business.

@David Epstein I'm in Colorado as well. Mind sending me DM on your experience and thoughts on JAX. Thanks

happy to meet you!  Just sent you a quick DM.

as I have said before to folks, I am extremely pleased with Suncoast and the entire team there.  Communication is excellent maintenance and property management is fantastic, and the way the team handles things like COVID or hurricane season is exemplary!  My tenant is extremely happy an in place for many, many years!

Team, does anyone know of a good property management company in Jax? I'm looking for one as well. Also, DO NOT use Invictus....worsr response rate ever.

happy to meet you!  Just sent you a quick DM.

as I have said before to folks, I am extremely pleased with Suncoast and the entire team there.  Communication is excellent maintenance and property management is fantastic, and the way the team handles things like COVID or hurricane season is exemplary!  My tenant is extremely happy an in place for many, many years!

I wouldn't judge a property management company by their ability to preserve a high quality tenant.  Wait to see what happens when the tenant moves out and trashes your place.  Are they able to respond to professionally and promptly manage your property to get it in working condition and back on the market.  Suncoast can not do that.  I had 3 unbelievably frustrating months where there was no initiation of communication from Suncoast and literally no one in the company knew what was going on at my vacant house.  If I were you I would change managers now before you end up in a situation like I was in.  Best of luck!

And for all other investors reading this thread, if you are considering Suncoast please review the evidence above and PM me if you need more.

Thanks for the heads up!

Hey All, great info here. I am an investor and owner of a few properties down in the Jacksonville market. I have been very fortunate to have found Caryn Thomas from Supra Property Management after considering a few of the PMs mentioned through Bigger Pockets. Caryn is a bulldog. Her reviews may not look great but when you read through you will notice it’s tenants not holding up their end of the deal. She holds people accountable and is always available to catch up if I want to brainstorm. Very knowledgeable and treats owners with a ton of respect. She oversaw a big rehab for me and just placed tenants for me within 30 days.  I would highly suggest giving her a call. You can mention my name Chris Q from New York. This is my first post ever on BP. If you are interested in Jax and wanted to catch up feel free to DM me....hopefully I see it or it gets pushed to my email. Be safe and thankful.

I haven't been impressed with Suncoast either. They came along with my purchase in Jacksonville.  If things don't improve, I'll look for new PM at end of agreement.

If anyone has recommendations for good property managers in Jacksonville and Ocala areas, please message me! :)

Hi Lori,  I am looking at buying the Build to Rent from Southern Impression Homes who uses Suncoast PM as part of the deal.  Besides the management, how is the actual home?  And did you find a PM in Ocala?  I am considering one of their home builds, but I am not committed to their PM company.

The home looks good inside. I had some trouble with one of the septic systems at one build and the siding looks like it will require maintenance -- like the nails are coming loose or something. Other than that, no problems with the build quality in Jacksonville.  I haven't had any issues with the new home in Ocala.  SI is sister company with Suncoast, so they require suncoast on all new builds.  Suncoast turnover cost on the new home in jacksonville was insanely high given the good state the tenant left the home in. (I was there the week before they moved out). I sent you a message. Feel free to email me with any questions you have. I'm not on BP very often.

I agree. SunCoast has been nothing but a nightmare. I wish I had seen this post last year!  As the original poster commented I have had nothing but issues with the renewal process from Suncoast. Literally 90% of what Will Ellis went through I am still currently going through. Does anyone have any recommendations from other property management firms that are good?