I am currently under contract with my first property multi-unit and am trying to figure out the problem and expected costs for the attached image.  I do understand that the best approach is to get a contractor/basement specialist, but I am just trying to understand ahead of time so I have a better sense/conversation with the guy.  There is evident of mold/rot in other areas of the basement, but was all dry.  Unfortunately I didnt have the home inspection when it was raining...

Is this a french drain type of repair?  Or just an old wall that needs to be remediated by replacing the cinder block walls?

What is your experience with leaky basements? 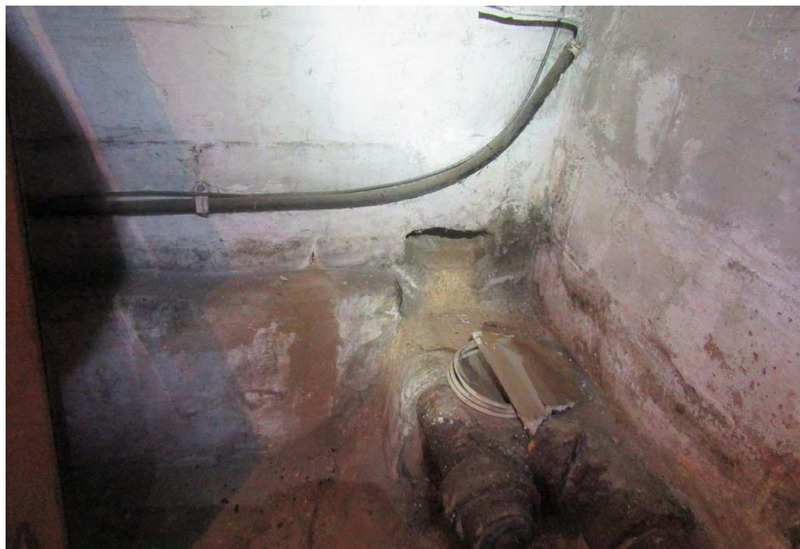 Have repaired a few basements and foundations.

From what I can see theblock looks fine to me. First, see what is going on outside of that wall. Is the downspout carried away from the house? Is the dirt sloped appropriately? Etc. I have made friends with my basement/foundation specialist and have learned that many cases can be resolved with simple fixes.

Since you are keeping the property you can try these lower cost fixes first. If it's a leak into your foundation you can install a sump pump or excavate around the perimeter of the house and complete repairs, water proof, and install foundation drains.

Is that some sort of capped sanitary or storm line coming out of the wall?  Looks like there might be newer concrete poured around it.  I’d suspect that as the cause of the water problem- maybe that hole in the block was to get access to it to repair it?  And is the block open on the other side as well?  if it is the problem is going to be that even if you seal this side up, you've got an access point for water that will fill up the wall and freeze in the winter.

I'd have a good plumber look at this first (have them camera the line).....the plumbers I deal with have seen all sorts of water problems and are usually pretty good about determining the source of any water and what can be done about it.  This may be a plumbing rather than basement wall issue, even if its not they can usually predict whether or not a sump pump is going to resolve the issue.

@Don - that is the main sewer line of the house.  What you may see as new concrete is dirt and silt that has been flowing through with the water ( I think).  Good thought that maybe it was used for repair, didnt think of that one.  It is blocked on the other side, it is where the porch once was, but has been converted to an additional room for the house.   This will make it a bit more complicated since we can not just dig from the outside of the house.

I'll have a plumber also take a look at it as well.  I guess the #1 question is, where is the water coming from and how do we fix that?


@Don - that is the main sewer line of the house.  What you may see as new concrete is dirt and silt that has been flowing through with the water ( I think).  Good thought that maybe it was used for repair, didnt think of that one.  It is blocked on the other side, it is where the porch once was, but has been converted to an additional room for the house.   This will make it a bit more complicated since we can not just dig from the outside of the house.

I'll have a plumber also take a look at it as well.  I guess the #1 question is, where is the water coming from and how do we fix that?

Water leaks can be tricky. You mentioned a downspout is on the outside corner, is it dumping water directly on the ground or is it taken away from the house via a gutter extension, under ground drain pipe, etc? If it is dumping onto your foundation then I would start there.

Cracks can be from natural settlement and no big deal or from foundation issues, which can be minor if found early enough. I'd recommend calling a local foundation company. They can assess the water and the cracks and give you a solution. Once they give you an assessment I would recommend calling a couple other companies. This way you can see if they are pulling your leg on what needs to be done and determine if they are giving you a fair price if it does actually need work.

Water is the no.1 enemy of any building, make sure you find the issue.

Chris - much appreciated for the responses.  I'll work on finding out the source.  One contractor from basement solutions suggested putting in a french drain, but doesnt really address where its coming from.

@John Salgado keep in mind most basement companies are selling their system/product. If the house needs an interior drain into a pump system, this could run $10-12k, so hopefully you can address it without the need.

I had a house I bought in Nov, and put it on the market in Feb (in CT). I never even noticed, but as I was finishing the basement cleanout, there was a lot of kitty litter pushed under/behind the oil tank. Sure enough after cleaning it all out it was there due to a water leak. I found the cause, a downspout and grading issue at that corner of the house. After some sweat equity, with a shovel, mulch and some new DS extensions, the water was flowing away. For the next month I kept an eye on it (house was under contract, but needed the month to close) and sure enough no more water ever got back in.

In your situation the room built over this corner makes it tougher, however I imagine you still have access under, if it was an old porch? I would be extending the downspout you note ends at the foundation (even if it isn't the direct cause). Then I would get under the house and see what the grading looks like. Get under the area when its raining/leaking inside and see what the ground looks like etc. I would also clean the basement corner out, get rid of the silt and give yourself a fresh start to see what might be happening.

@Brian Pulaski thanks for the info!  there is an existing sump pump system in the basement - definitely old and possibly not functional.  The hole/well isnt even lined and I just see dirt on the inside.

I'm not sure if it is an active leak, so I will have to monitor it first when it rains.  Good pointers on your experience and what to look for!

There is a small crawlspace under the porch about 10 feet away and 4 feet above the hole in the photo.  I will definitely clean out the silt so I can get a fresh look!

On another note - do you have any experience with sewer mains and rust?  I am trying to figure out if I should replace this sewer line.  Exterior layers of rust are easily falling off with some seepage noted under the pipe. 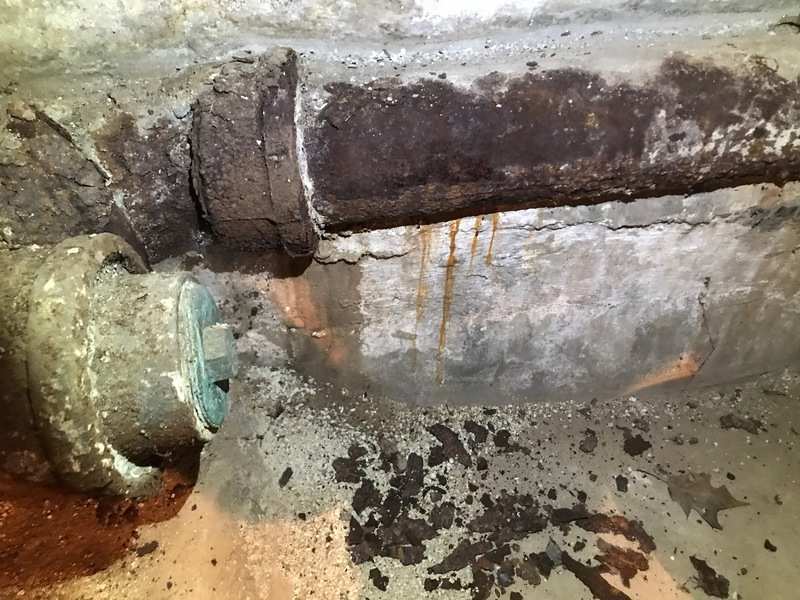 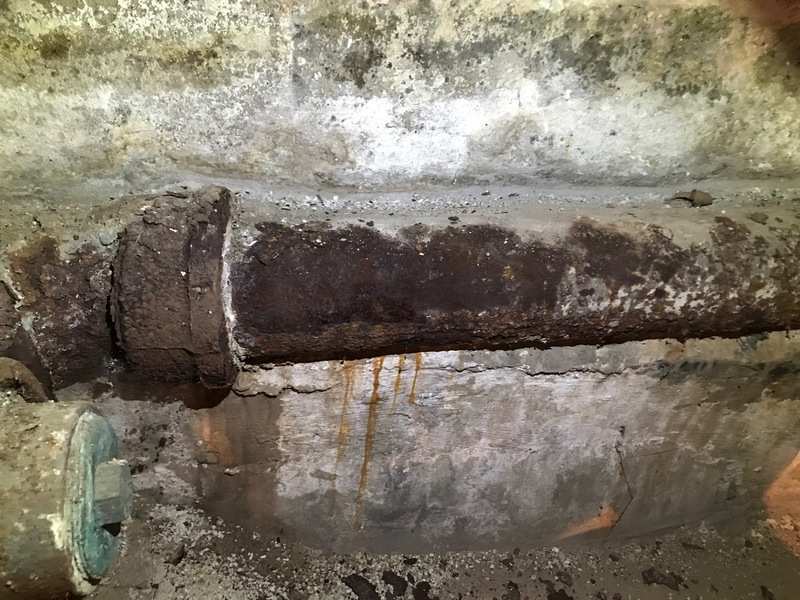 @John Salgado sorry, no experience with sewer mains, however based on that photo, the deterioration and staining, my "guess" would be that is an issue and needs replacing. Hopefully someone with more knowledge will chime in.

Well the appraisal report came back and showed water in the basement, wet throughout 3/4, maybe 1/2 deep.  From the photos it does look like the water is coming from this corner.

@Brian Pulaski - was your issue just seepage through the wall/cracks? did you compact the dirt where the water was coming through?  What was the purpose of the mulch/woodchips? sorry for all the questions, now that its a confirmed issue, i'm looking further into how to resolve it best since leaking basements isnt always a quick fix.

@John Salgado my issue was a combination of poor grading (towards the house), and a downspout that wasn't pushing water away.

My fix was to dig down a bit (shallow) and place some heavy plastic on that corner from the foundation out to the edge of the mulch bed. I then topped that with dirt/full graded away from the house. Then topped with mulch. I added a long extension at the end of the downspout (I believe it was 6-8') and had that drop onto a splash block to help it "fan out" when it hit the lawn. This cured the issue I had.

So, let's first get some more information.

Which type do you have in this town / on this house? Because those older systems usually have downspouts that feed into the sewer pipes directly, they don't dump water onto the ground.

Those cast iron pipes look like they may be close to splitting / cracking. So you might want to have those pipes scoped with a camera to get a better idea.

First of all thank you to everyone who replied and took the time to do so.  This was my first purchase and all your feedback was very helpful in a time when everything is new and time was key factor.

Cause of the hole was never resolved, but patched up when the french drain was installed (two pits and discharge to the street).  No more water in the basement.  Downspout was addressed via plastic gutter plates for disbursement away from the house, easy fix.

Horizontal basement Sewer drain was replaced and paid to have the vertical stack water jetted due to gunk clogging like an artery, to only end up replacing the entire water drain plumbing.  (1 night my kitchen sink started pouring water into the basement to see a rusted elbow, most likely from constant draino)  could have saved the money spent on water jetting - rookie mistake.

Basement has been dry ever since and glad I replaced the old cast iron drainage so i didnt have to fix a bunch of tenant emergencies of leakage.  I also learned, everyone on the block has a sump pump, could have known this if I looked down the street seeing all the pvc discharge pipes.

Best of luck to all!